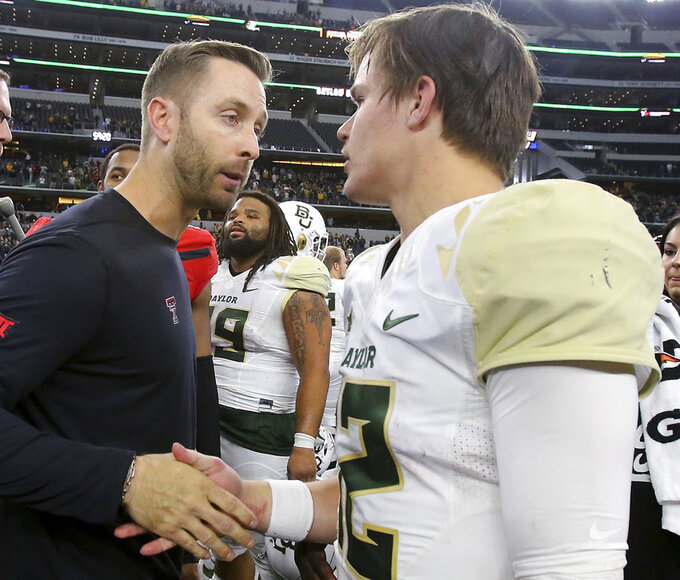 Kingsbury, who has a 35-40 record in six seasons, said he expected to sit down soon with athletic director Kirby Hocutt. The coach wouldn't provide any indication of what he expected to happen.

"Going to talk to Kirby and take it from there," Kingsbury said after a season-ending 35-24 loss to Baylor .

Hocutt, who usually attends the coach's postgame news conferences, wasn't in the room after Saturday's game.

"He's been phenomenal with me, and supportive and given me everything I needed to be successful at Texas Tech," Kingsbury said. "I have the utmost respect for Kirby and what he's done for this university, and he's the best AD in the country, we're all lucky for him."

Kingsbury still has two years left on his contract.

During his weekly radio segment earlier this week, Hocutt acknowledged there has been progress this season before adding, "But when you're 5-6, it's hard to hold your hat on a lot of progress," and that the only thing that matters is the record.

The Red Raiders were 5-2 before finishing the season with a five-game losing streak in which they scored first each time. That included consecutive losses to No. 6 Oklahoma and No. 11 Texas by a combined 12 points in their final home games before they had only 181 total yards without a touchdown in a 21-6 loss at Kansas State, and then couldn't hold onto a halftime lead against Baylor.

Texas Tech used three quarterbacks this season, and all were hampered by injuries.

McLane Carter started the opener against Ole Miss, but the junior he suffered an ankle injury in the first half of that game. He didn't start again until Saturday, and then was gimpy again after getting sacked on the opening drive before throwing a touchdown pass.

True freshman Alan Bowman took over for Carter early in the season, and was the nation's top passer before getting sidelined twice because of a partially deflated lung. Neither Bowman or dual-threat Jett Duffey, who had 524 total yards in a near-upset of Texas, were available for the finale. Duffey hurt his knee against Texas and while playing through that at Kansas State hurt his foot.

"We had a quarterback playing at an elite level. Really, if you look at Bowman, I don't know if I've ever seen a true freshman play better, and kind of the run he had," Kingsbury said. "Just weren't able to recapture kind of how we were rolling, and that's was tough. That's on the coach to make sure whoever's the quarterback, you can maintain that, but that's hard if you lose a guy who's playing at that kind of elite level in this league. It's hard to keep up."