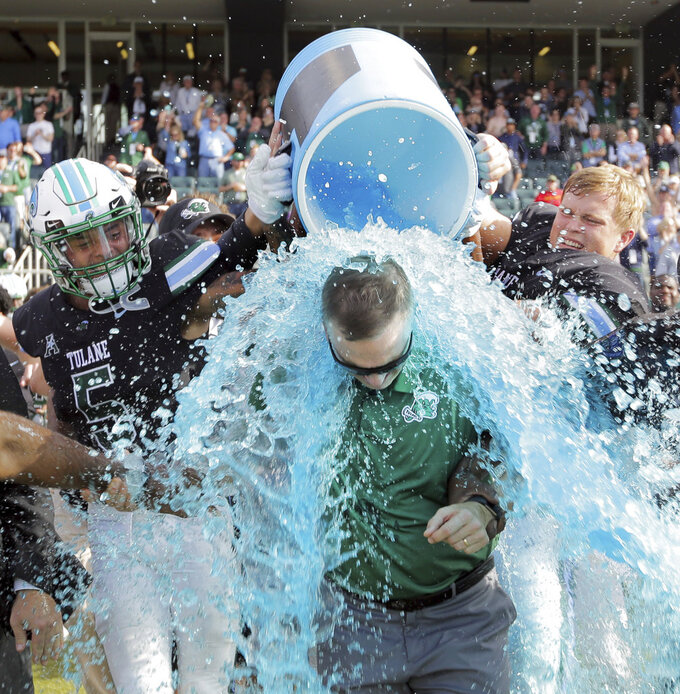 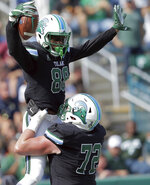 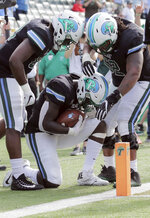 Athletic Director Troy Dannen said third-year coach signaled his intent to attempt a high-stakes, 2-point conversion several snaps before Tulane's decisive drive had even reached the end zone, adding, "I knew he had the play."

Justin McMillan connected with Jaetavian Toles for a 26-yard touchdown with 1:27 left, passed back across the field to Charles Jones for the 2-point conversion, and Tulane avoided a devastating collapse with a 29-28 victory over Navy to become bowl eligible for the first time since 2013.

"We were doing really well offensively. Our defense was kind of tired," Fritz said. "I went over and told the AD I was going for 2 — just wanted make sure I still had that contract.

McMillian said he could not see where exactly Jones was when he let his pass fly with the season in the balance.

"I knew the vicinity where he would be at, and I'd seen him release, and was like, 'OK, Chuck should be somewhere over there,'" McMillan recalled. "I just knew he would handle the rest."

The game-winning score completed a seven-play series that covered 71 yards in 2:11. It came in direct response to Tazh Maloy's 9-yard TD run, which capped a string of 25 straight points that turned Navy's 21-3 halftime deficit into a late, 28-21 lead.

Tulane (6-6, 5-3 AAC) sealed the win by stopping Navy (3-8, 2-6) in four plays. That allowed the Wave to run out the clock and storm the field in celebration, having won four of its last five games to reach the six-win plateau, normally the benchmark for bowl bids.

"Our loyal fans — which we've got a ton — they've had some tough times here, and it's about time we got the opportunity to win and celebrate like that," Fritz said.

McMillan threw for three touchdowns and rushed for one.

His first and longest scoring strike went 55 yards to Darnell Mooney, who broke behind the Navy secondary down the left sideline as McMillan hit him in stride. The second TD pass covered 52 yards on a deep crossing route to Jabril Clewis.

Zach Abey passed for a 73-yard touchdown and caught a 37-yard scoring pass — a sudden surge from a passing game that ranked last in the nation coming in.

"Obviously, that's not really who we are, but in the time of need, we needed to do that and it showed that we were prepared," Abey said.

Abey finished 7-of-13 for 167 yards, including a fourth-down completion that kept alive Navy's go-ahead scoring drive in the fourth quarter.

Sean Williams' interception and 36-yard return to the Tulane 7 set up a short field goal to ignite Navy's second-half rally. Next came Malcom Perry's halfback pass across the field to Abey.

"We've had that in the playbook for a long, long time, but I think it was the perfect time to do it," Abey said. "When I pitched to Malcolm, the whole defense was just gone."

After Tulane stalled again, Abey found Perry uncovered over the middle for his game-long scoring play, and hit Taylor Jackson in the back of the end zone for a 2-point conversion to tie it.

Navy: The Mids have lost 12-straight away from Navy-Marine Corps Memorial Stadium, dating back to a 31-21 triumph at Tulsa on Sept. 30, 2017. But Navy had to be encouraged by newfound success in the passing game heading into its annual rivalry game with Army. Navy also went 4-for-5 on fourth-down conversions.

Tulane: An enthusiastic crowd on senior day looked and sounded incredulous as chances for a first bowl in five years seemed to slip away — all because of big passing plays by a struggling Navy team that hardly throws and hadn't won on the road all season. But the Tulane faithful were jubilant after the Green Wave offense regrouped just in time. The Wave defense sold out to stop the run, holding Navy to 117 yards rushing, 187 yards below its average coming in.

Tulane awaits its bowl bid, with the most likely invitations coming from Cheribundi Tart Cherry Bowl in Boca Raton, Florida, and the Frisco Bowl in Frisco, Texas, both of which have contractual ties to the AAC.