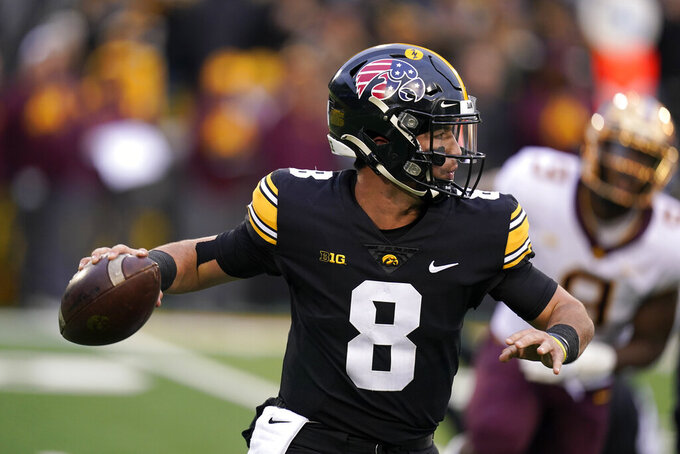 That was the approach Ferentz and his staff took with Padilla this week as he prepared to make his first career start Saturday against Minnesota.

“I don’t know if anyone on the staff made a big deal about it,” Ferentz said. “We just acted like it was his turn, his time. He is the starter this week.”

The approach worked in the “Battle for Floyd of Rosedale.”

Padilla threw for two touchdowns and ran for another, and No. 19 Iowa withstood three fourth-quarter comeback attempts to beat Minnesota 27-22 and keep the bronze pig trophy for the seventh year in a row.

Padilla, who took over for injured quarterback Spencer Petras in last week’s 17-12 win at Northwestern, completed 11 of 24 passes for 206 yards. He had a 1-yard touchdown dive in the second quarter, then had touchdown passes of 72 yards to Charlie Jones in the third quarter and 27 yards to Keagan Johnson in the fourth.

“Going out there in the first half, seeing the entire crowd in Kinnick for my first start, (I was) just super excited,” Padilla said. “Couldn’t imagine being in this position when I was a kid, but it was something I have always dreamed of.”

How the Hawkeyes’ quarterback situation plays out in the coming weeks is unclear. Petras, the starter since last season, is still dealing with a sore right shoulder, and Ferentz said his status is day-to-day.

“I think the good news is we’ve got two good quarterbacks now that we have faith and trust in,” Ferentz said.

“They have their differences but they both work very hard,” Jones said. “Alex is a young guy and he has done a really good job stepping up while Spence is hurt. Everyone around Alex is helping and encouraging him as much as they can, so he is doing a great job.”

This was Padilla's game, and Jones was impressed with the pass Padilla threw him for the touchdown.

“First of all, that was a great play for us, and a perfect time for it,” Jones said. “We knew that the defender was going to be playing outside of me, and it was just a double-move route, where you fake the out and go to the post. Alex threw a great ball, right where I could get it and I had a lot of space.”

Even a level-headed player like Padilla can get excited, though, like he did after his touchdown dive.

“First career touchdown, yeah, in front of the fans I was just super excited,” Padilla said. “I might want to calm down a little bit next time.”

The Hawkeyes (8-2, 5-2 Big Ten) led 24-16 before Minnesota’s Tanner Morgan threw a 68-yard touchdown pass to Chris Autman-Bell with 5:28 to play. The Gophers (6-4, 4-3) went for the two-point conversion, but Morgan’s pass was tipped by Iowa safety Dane Belton and fell incomplete.

The Gophers got the ball back at their own 10-yard line with 3:08 left. Morgan was sacked for a 7-yard loss on second down, and his fourth-down pass was broken up by Iowa’s Matt Hankins.

Caleb Shudak’s 29-yard field goal provided the final margin, and then the Hawkeyes’ defense bowed up one more time when Minnesota drove to the Iowa 39. The game ended with Joe Evans sacking Morgan.

Minnesota had a chance to take the lead down 17-16 to start the fourth quarter, but Dragan Kesich’s 53-yard field-goal attempt was blocked by Logan Lee. Five plays later, Johnson took a short pass from Padilla and turned it into a 27-yard touchdown.

The Gophers, who had the ball for 40 minutes, had 189 rushing yards. That was the most this season against the Hawkeyes, who came into the game ranked eighth nationally in rushing defense at 98.6 yards per game. Ky Thomas rushed for 126 yards to lead the Gophers, who haven’t won in Iowa City since 1999.

“They had a really good plan and it took us time to adjust to that,” Ferentz said.

“This is one of the best front sevens in college football,” Minnesota coach P.J. Fleck said. “We wanted to get them in space as much as we could, spread the field a little bit more.”

“You always want touchdowns, I want to make sure I’m clear on that,” Fleck said. “Everybody wants touchdowns. If you could never kick a field goal, great. But you do everything you can to gain as many points as you can to get to the fourth quarter and see where you’re at. You never know how it’s going to go."

The “Battle for Floyd of Rosedale” began in 1935, and the Hawkeyes have a 43-42-2 edge in the series since then. It was Minnesota’s 10th consecutive loss on the road in the series.

“Since I’ve been here, I don’t think we’ve played Iowa like that,” Fleck said. “There’s no moral victories. Who cares? But I care.”

Fleck, who hasn’t beaten Iowa in five tries as Minnesota’s head coach, paused when he was asked what it would take to beat the Hawkeyes.

“A better performance than what we had tonight,” Fleck said.

The Hawkeyes are tied with Wisconsin for first in the Big Ten West, but the Badgers own the tiebreaker because of their 27-7 win over the Hawkeyes on Oct. 30. The Gophers dropped out of what was a four-way tie at the start of the day.

The Hawkeyes might move up a spot or two, but no big move is in store after they needed to hold on late against the Gophers.

Minnesota: At Indiana next Saturday.