The Latest: ACC expects only slight revenue hit this year 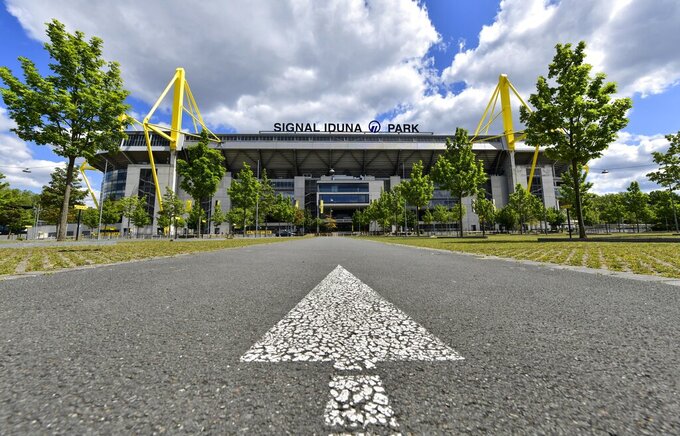 A directional arrow on a street points to the Signal Iduna Park, Germany's biggest stadium of Borussia Dortmund in Dortmund, Germany, Thursday, May 14, 2020. Bundesliga will now restart on May 16, 2020 when Borussia Dortmund will play the derby against FC Schalke 04 at home without spectators due to the coronavirus outbreak. (AP Photo/Martin Meissner)

Atlantic Coast Conference commissioner John Swofford says the league expects to distribute nearly all of its projected revenues to member schools for this school year despite the shutdown of college sports amid the coronavirus pandemic.

In a video conference with reporters Thursday, Swofford said the league expects to distribute “98%” of its projected totals to league schools. He didn’t discuss specific amounts.

“Given the circumstances, we feel pretty good about that actually,” Swofford said.

The NCAA announced in March that it would distribute $225 million in June to 350 Division I schools after the cancellation of its men’s basketball tournament, much less than the original plan of $600 million.

The league was already depending on the ACC Network to help close a growing financial gap with other power conferences. Swofford said the network ultimately was able to broadcast nearly all of its revenue-generating events, from the completed football season to a basketball schedule that lost the final seven games of the ACC men’s tournament.

Minnesota athletic director Mark Coyle and the school’s five highest-paid head coaches have agreed to take a 10% pay cut for the first six months of the upcoming fiscal year to help offset revenue losses from the COVID-19 pandemic.

“I appreciate their dedication to Minnesota and willingness to help in a time of financial uncertainty,” Coyle said.

The next fiscal year starts on July 1. Coyle told the Board of Regents last week that the department is on pace to finish the current fiscal year with a $4 million deficit. The 2019-20 operating budget for Gophers sports was $123 million. The athletic department has projected a loss of up to $75 million of expected revenue under the worst-case scenario of a canceled 2020 football season. A milder hit of $30 million in lost income is forecast if football games are played without fans.

Gogue told incoming freshmen in a video Wednesday, “We’re going to have football this fall.”

Gogue didn’t offer any details in the short video about how the games would be played and did not discuss whether fans would be in the stands. But the Auburn president predicted the coronavirus pandemic won’t keep the campus from having "all the activities that we have every fall.”

He said Auburn will reopen classes on campus and have fraternity and sorority and club activities.

The Southeastern Conference has formed a task force of medical professionals from the 14 member institutions to discuss the best ways to resume sports.

Herrlich said earlier Thursday that he left the team’s hotel briefly to visit a supermarket in search of toothpaste and skin cream.

Hours later he said he would miss Saturday’s game because “in this situation I have not lived up to my position as a role model to my team and to the public.”

The game against Wolfsburg was to be Herrlich’s first game in charge of 14th-place Augsburg. He was appointed in March but had yet to oversee a game because the league was suspended because of the coronavirus pandemic.

Augsburg says Herrlich will take charge of training again only after twice testing negative for the coronavirus.

Milwaukee Brewers general manager David Stearns says he hopes a potential return of Major League Baseball from a pandemic-imposed hiatus could “provide a diversion” and be “part of the solution to what everyone is going through right now.”

Stearns emphasized that it would need to be done “in a safe and responsible manner.”

“The truth is we don’t know what scenario is coming,” Stearns said Thursday outside a hospital as the Brewers helped donate meals to hospital workers.

The Brewers are working with other companies and local firefighters to help provide 1,000 meals to workers at Milwaukee-area hospitals. Stearns spoke after food was given to employees at Aurora St. Luke’s Medical Center.

West Virginia University president E. Gordon Gee vows that the Mountaineers will play football this fall “even if I have suit up.”

Despite uncertainly around the coronavirus pandemic, all Big 12 schools, including West Virginia, plan to open campuses for the fall semester, a key step toward launching fall sports.

It’s not the first time a statement by Gee has turned heads.

The then-Ohio State president was criticized in 2010 for saying TCU and Boise State didn’t belong in the BCS title game even if they ran the table because of weak schedules, referring to lesser opponents generally as “Little Sisters of the Poor.”

In 2012 he took a shot at Notre Dame in a meeting of Ohio State’s athletic counsel, saying that the school was never invited to join the Big Ten because its priests are not good partners. “Those damn Catholics” can’t be trusted, he said.

A judge has upheld the Dutch soccer association’s decision to scrap relegation and promotion from or to the top-flight Eredivisie as it cut short the season due to the coronavirus pandemic.

The top two clubs in the second-tier Keuken Kampioen Division, Cambuur Leeuwarden and De Graafschap Doetinchem, launched a legal challenge to the April 24 decision, seeking to seal promotion in court.

In a ruling streamed live Thursday, Judge Hans Zuurmond rejected their arguments, saying the Dutch association, the KNVB, has the power to make such a decision.

Zuurmond says because of the coronavirus, the KNVB “had to take a decision with its back to the wall. Doing nothing was not an option.”

According to the ruling, the KNVB had to act in the interest of all clubs. Zuurmond says it is “very bitter for Cambuur and De Graafschap, but that is not enough to overturn the decision.”

The decision marked the first time a court has ruled in a legal challenge to a one of the major European leagues' coronavirus stoppages.

The Netherlands on April 24 became the first top-tier European league to cancel the remainder of the season. But clubs that felt disadvantaged by the terms immediately announced plans to launch legal battles.

The British government says it is helping the Premier League resume in June but it wants the finances to flow throughout English soccer and more fans to be able to watch games on television.

Culture Secretary Oliver Dowden held talks on Thursday with soccer authorities as the national coronavirus lockdown starts to be eased. The pandemic will continue to prevent any fans from attending matches if sports events do restart in June after being suspended in March.

Dowden says “the government is opening the door for competitive football to return safely in June. This should include widening access for fans to view live coverage and ensure finances from the game’s resumption supports the wider football family.”

In a statement, Dowden says soccer authorities need to finalize their plans before government approval will be given for leagues to start up again.

Players are still having to maintain social distancing in training, but contact is expected to be allowed if there is no new spike in COVID-19 cases nationally.

IndyCar officials have announced NBC will air a four-hour program on May 24, the original date of this year’s Indianapolis 500, that will look back at last year’s race.

“While this Memorial Day weekend will certainly be different, we’re pleased to join our partners at NBC Sports in continuing this tradition through this special TV presentation,” Penske Entertainment Corp. CEO Mark Miles said in a statement. “We look forward to recognizing both our military and frontline COVID-19 heroes while providing motorsports fans some intense and behind-the-scenes IndyCar action through the race replay.”

Pre-race coverage will include honoring frontline workers during the pandemic as well as the military traditions associated with the 500. The program also will preview this year’s season opener, which is scheduled for June 6 at Texas.

The Baltimore Ravens intend to compensate stadium workers if NFL games are played before a limited numbers of fans — or no one at all — due to social distancing requirements during the coronavirus pandemic.

Ravens president Dick Cass says the team is working on a program to provide for the estimated 3,300 people employed a typical game day.

“If we don’t have that kind of staff because we have a reduced crowd at the stadium, we are planning on creating an employees' assistance fund,” Cass said, noting that “we have not terminated or laid off or furloughed anybody and we don’t intend to.”

Instead of watching from the sideline at a minicamp practice, Cass was in his home Thursday morning, speaking in a teleconference arranged by The United Way. He noted that in a normal year on this date, there would be 90 players having breakfast at the team headquarters.

Cass said the team sill plans to open training camp and start the season on time, but it “may have to make adjustments.”

The IOC says it is setting aside $800 million for loans and payments arising from the pandemic that forced the 2020 Tokyo Olympics to be postponed.

International Olympic Committee president Thomas Bach says $150 million will be available for loans to sports governing bodies and national Olympic committees. They were due payments this year for the Tokyo Games, which are now scheduled to open in July 2021.

IOC chief operating officer Lana Haddad says a breakdown of how the $650 million could be allocated will be formulated in the months ahead. It was unclear how much of the money would go to Tokyo organizers.

The Swiss government announced Wednesday that Olympic sports federations based in the country can apply for federal loans. The IOC will put up half the money for those loans, with federal and state authorities providing 25% each.

The Southeastern Conference has formed a task force to advise the league and member schools on decisions about resuming sports amid the coronavirus pandemic.

Conference members will have to approve any policy changes related to a return to practices, workouts, meetings and competition.

SEC Commissioner Greg Sankey said the task force “has begun to provide the guidance necessary to make decisions related to the return to athletics activities for SEC student-athletes and to assist in our collaboration with colleague conferences in determining a safe return to athletics competition.”