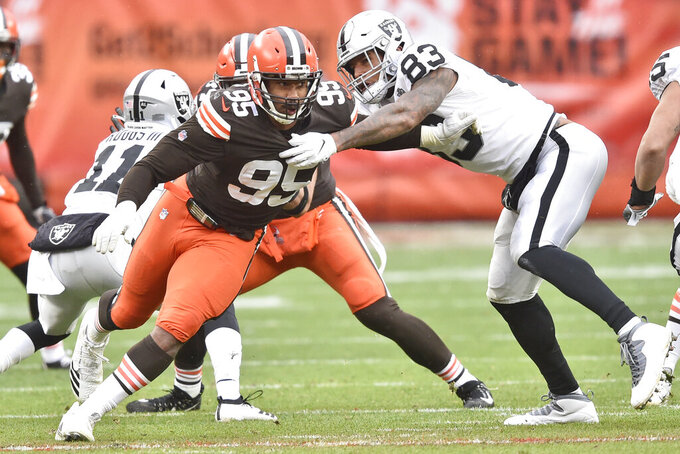 Cleveland Browns defensive end Myles Garrett (95) runs around Las Vegas Raiders tight end Darren Waller (83) during the first half of an NFL football game, Sunday, Nov. 1, 2020, in Cleveland. Garrett injured his knee in the first quarter in the Browns 16-6 loss to the Raiders. (AP Photo/David Richard)

The postponed Air Force-Army football game at Michie Stadiuim has been rescheduled to December.

The game is now scheduled for Dec. 19 on Army's home field. It was moved from its customary spot on the first Saturday in November because of COVID-19 issues at the Air Force Academy.

The rescheduling keeps alive the competition between the three service academies for the Commander-in-Chief’s Trophy for the 49th year. Air Force beat Navy 40-7 to open its season in early October and a win over the Black Knights would give the Falcons the hardware for the 21st time.

Hockey Canada announced Wednesday that players, coaches and staff at the camp in Red Deer, Alberta, have entered a 14-day quarantine retroactive to Monday. All camp activities will be paused until Dec. 6.

The original announcement of the positive player tests came on Tuesday — three days after Hockey Canada said a “non-core member” of the team’s staff also tested positive. Hockey Canada said it was suspending all camp activities for the day, including an intrasquad game, at the time.

Both players and the staff have been in quarantine at the team’s hotel.

Players, coaches and staff all took mandatory COVID-19 tests upon arrival at the camp and have been tested regularly while there.

Hockey Canada is in the midst of the selection camp ahead of the IIHF World Junior Hockey Championships in Edmonton that open Christmas Day.

The season-opening women’s basketball game between Cal State Fullerton and No. 9 UCLA has been called off.

There was an 80-minute delay Wednesday before the game was called. Fullerton was awaiting results from its COVID-19 tests from last Friday.

Some UCLA players went on the court at Pauley Pavilion to kill time by shooting. The Titans remained on their bus outside the arena.

Washington Football Team president Jason Wright, and owner Daniel Snyder and his wife, Tanya, won’t be traveling to Dallas for the traditional Thanksgiving Day game against the Cowboys because of COVID-19 protocols.

All three came in contact with an individual not affiliated with the team who had tested positive for the novel coronavirus. Although Wright and the Snyders tested negative, the decision not to travel follows team and NFL protocols.

The team announced the news in a statement.

Browns linebacker Sione Takitaki has been placed on the COVID-19 list after testing positive for the virus.

Takitaki will miss this week’s game at Jacksonville, along with star defensive end Myles Garrett, who became ill last week.

Garrett, who has 9 1/2 sacks this season, sat out against the Eagles as well. Coach Kevin Stefanski said it’s possible the No. 1 overall pick in 2017 could return for the Dec. 6 game against Tennessee.

Takitaki’s positive test was followed by the Browns closing their facility and then practicing in shifts on Wednesday as they prepared to face the Jaguars.

Fullback Andy Janovich, offensive lineman Chris Hubbard, and defensive end Joe Jackson were placed on the COVID-19 list previously. Stefanski ruled out Janovich and Jackson again this week, but said there was a chance Hubbard could be back for the Jaguars.

Buckner will not be able to play Sunday, leaving Indy without its best run stopper for a showdown with Tennessee. The teams are tied atop the AFC South.

Buckner’s 24 solo tackles are tied for the second-most among NFL defensive tackles this season.

Indy also could be without Buckner’s likely replacement, Denico Autry. He went on the reserve/COVID-19 list last week and Reich was uncertain about Autry returning this weekend.

The game has been declared a no-contest and there are no plans to reschedule it.

However, the Mountain West said it’s working with Air Force to find another game for the Falcons this weekend.

The day after Minnesota canceled its game against Wisconsin due to a rise in COVID-19 cases within the program, star wide receiver Rashod Bateman has decided to end his season early out of concern for his health with an eye toward his NFL career.

Bateman made the announcement on Twitter. The widely projected first-round draft pick initially opted out of his junior year in August, shortly before the Big Ten pushed the stop button on the season. When the conference revised COVID-19 protocols and relaunched the schedule, Bateman had rejoined the Gophers and had his eligibility restored by the NCAA.

Bateman was the Big Ten Receiver of the Year in 2019 with 60 receptions for 1,219 yards and 11 touchdowns in 13 games, helping Minnesota go 11-2 and finish 10th in the final Associated Press poll.

The Gophers are 2-3 this year. Bateman had 36 catches for 472 yards and two touchdowns in five games.

The Bulldogs learned mid-afternoon of the Columbus State test results, forcing the game to be called off.

Georgia also had to cancel its second scheduled game against Gardner-Webb on Sunday for similar reasons, but the Bulldogs hastily lined up a replacement game against Florida A&M.

That is now set to be the Bulldogs’ season opener, barring any additional setbacks.

The team's game at West Virginia game on Saturday has been postponed in accordance with Big 12 Conference football game interruption guidelines.

The game has been rescheduled for Dec. 12.

Defensive lineman Christian Wilkins was active off the reserve/COVID-19(asterisk) list by the Miami Dolphins and practiced Wednesday.

Wilkins missed the past two games after playing more than half of the team’s defensive snaps in the first eight games.

No. 15 West Virginia will play top-ranked Gonzaga in the Jimmy V Classic on Dec. 2 in Indianapolis.

West Virginia announced the scheduling addition Wednesday, saying it will be the opening game of a men’s basketball doubleheader. No. 2 Baylor will face No. 8 Illinois in the second game.

The Mountaineers had been scheduled to host Youngstown State in their home opener on Dec. 2. That game was postponed after the Penguins paused all team activities due to COVID-19.

The Thanksgiving night game between the Ravens and Steelers has been switched to Sunday because of coronavirus issues with Baltimore.

The NFL announced the move Wednesday, but did not specify a time of game nor which network would televise it. Previously, it was scheduled for NBC’s prime-time telecast.

Lipscomb has canceled its men’s basketball season opener with Campbellsville Harrodsburg hours before tipoff. The game will not be made up.

School officials said Wednesday the cancellation is because of COVID-19-related issues in the Campbellsville Harrodsburg program.

Lipscomb, of the Atlantic Sun Conference, now will open its season Saturday against Lamar in the Tulane Classic.

The men’s basketball program at Monmouth University in New Jersey has been paused following a positive COVID-19 test result from the program’s Tier One members. It will enter a 14-day quarantine period.

Tier One members include athletes, coaches, and support staff. The positive result came from the program’s regularly scheduled testing.

The decision caused the Hawks of the Metro Atlantic Athletic Conference to cancel a game Wednesday night against Hofstra. Games against Maryland on Dec. 1 and Saint Francis of New York on Dec. 4 also have been canceled.

Also Wednesday, the team returned cornerback Winston Rose to the practice squad from the COVID-19 list.

The Atlanta Falcons have activated defensive end Dante Fowler from the COVID-19 list.

Fowler was placed on the list Nov. 14 during the team’s bye week and didn’t play last Sunday in a loss to the New Orleans Saints.

Receiver Laquon Treadwell is now the only Atlanta player on the COVID-19 list.

The Cleveland Browns have had another yet-to-be identified player test positive for COVID-19.

The team released a statement saying it has closed its facility in Berea, Ohio, to conduct contact tracing to see if others may have been exposed to the person.

The Browns still hoped to practice Wednesday, but that can’t happen until tracing is complete.

This has been a familiar pattern for the Browns, who will be without star defensive end Myles Garrett again this week at Jacksonville after he tested positive for the virus. Garrett also missed Sunday’s game against Philadelphia, and Cleveland’s defense stepped up without him by getting five sacks, a safety and scoring a touchdown.

The Jacksonville Jaguars will be without three defensive coaches against Cleveland this weekend because of COVID-19 testing and contact tracing.

Marron and assistant special teams coordinator Mike Mallory will run the defense during practice this week.

Marrone says he has confidence in Dana’s ability to handle the extra workload.

“He’s called the defense here last year during preseason,” Marrone said. “He’s called them in the preseason games, I’m sure some in Atlanta and he’s done it at Georgia Southern. Obviously, we worked together and been on the phones with him.

“That’s something that I think most teams really prepare for in case of an emergency and obviously with COVID everything is kind of ramped up to making sure that we’re all backed up in everything that we do.”