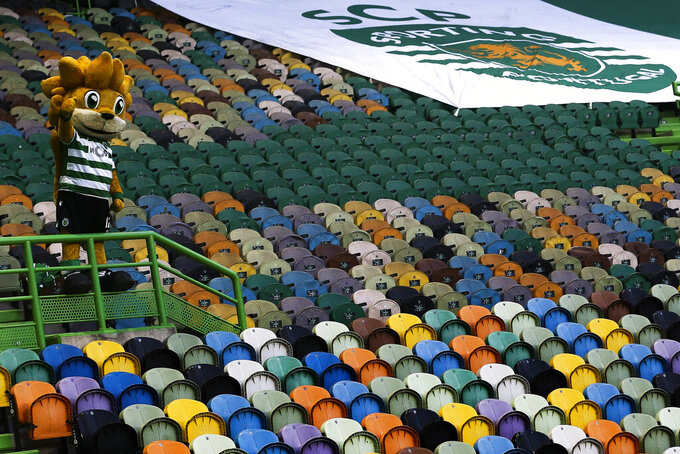 The AVP tour will have a three-week beach volleyball tournament in Long Beach, California, to replace the 2020 season that has been suspended because of the coronavirus pandemic.

The AVP Champions Cup Series will take place on successive weekends from July 18 to Aug. 2 with a total prize pool of $700,000. No fans will be in attendance.

All matches will be streamed on Amazon Prime, and some will be broadcast by NBC.

The International Tennis Hall of Fame is reopening to the public three months after shutting because of the coronavirus outbreak.

Starting Thursday, no more than 20 visitors at a time will be allowed to enter the museum in Newport, Rhode Island. They must wear a mask.

Among the changes since the site closed on March 16: It now will be open Thursday through Sunday from 10 a.m. to 3 p.m. Previously, it was accessible every day from 10 a.m to 5 p.m -- except Tuesdays from January to March.

The hall’s grass-court tennis tournament, usually held after Wimbledon in July, was called off this year because of the pandemic.

The tennis tours have been suspended since March and are now scheduled to resume in August.

Student-athletes at California can begin returning to campus to prepare for voluntary outdoor conditioning workouts.

Cal said Wednesday it has worked with city officials in Berkeley and doctors to develop a plan for supervised small group workouts after a long shutdown in response to the COVID-19 pandemic. Football players will be the first athletes to return to campus followed by other sports throughout the summer.

All athletes and staff must complete mandatory educational training before they are allowed to return to campus. That includes information on COVID-19 signs, symptoms, evaluation, testing, as well as infection prevention and control.

Athletes will be required to quarantine in their residence for seven days after returning and will undergo an antibody test, a COVID-19 test and a physical exam before being allowed to work out.

Anyone entering an athletic facility will be required to take a temperature check and symptom screening.

Athletes will work in groups of 10 or fewer people and facial coverings are required.

All workouts initially will be held outside at Memorial Stadium and Maxwell Family Field.

Two-time major champion and former No. 1 Simona Halep says she does not “currently plan to play” at the 2020 U.S. Open.

Halep adds in a statement emailed by her representative to the AP on Wednesday that her stance “is not set in stone.”

The 28-year-old Romanian is currently ranked No. 2 and is the reigning champion at Wimbledon. She also won the French Open in 2018.

Her best showing at Flushing Meadows was a semifinal appearance in 2015.

“Given the conditions outlined in the U.S. Open announcement this morning, as of today I do not currently plan to play in NYC,” Halep said. “However, as we know, this situation is fluid and that the conditions may change and improve before the entry deadline in mid July. I would like to underline that my decision is not set in stone. I have expressed my thoughts to both (U.S. Open tournament director) Stacey Allaster and (WTA CEO) Steve Simon (WTA CEO) and have explained the personal circumstances around them.”

UCLA will allow student-athletes who participate in fall sports and live locally, along with football players, to return to campus starting Monday.

It’s the start of what the school calls phase one of its four-part return to training plan.

Athletes in football, men’s and women’s soccer, women’s volleyball, men’s water polo and cross-country can choose to return to campus to start the process of resuming voluntary and allowed activities.

The first phase includes COVID-19 and antibody testing, as well as physical and mental health screenings.

Play has resumed in the Premier League after a 100-day suspension because of the coronavirus outbreak.

Sheffield United kicked off against Aston Villa inside a virtually empty Villa Park stadium after a minute’s silence to honor those who have died in the pandemic.

The game began with every player and the referee taking a knee in a tribute to George Floyd, a black man who was killed in the United States last month after a white police officer pressed a knee into Floyd’s neck for several minutes as he pleaded for air and eventually stopped moving.

Players maintained social distancing as they lined up after entering the field.

Manchester City will host Arsenal in the other match being played Wednesday.

England is the latest leading European soccer nation to resume play after Germany, Spain and Italy.

The women’s and men’s professional tennis tours have issued what they are calling “provisional” calendars that would resume sanctioned competition in August after being suspended since early March because of the COVID-19 outbreak.

The WTA said its first event would be the Palermo Ladies Open in Italy the week of Aug. 3.

The ATP said its players would return to action at the Citi Open in Washington beginning Aug. 14. Women also usually compete there but the WTA is still in discussions about its plans for that event.

The next week will have the ATP-WTA tournament that is usually in Cincinnati but the U.S. Tennis Association is shifting to New York as a tuneup at the same site as the U.S. Open, which begins Aug. 31.

The tours will then shift to European red clay in September for tournaments in Madrid and Rome before the French Open’s main draw starts Sept. 27.

The WTA said it anticipates all of its upcoming tournaments will be held without spectators.

The Minnesota Wild have decided to reduce hours for some employees and temporarily furlough others due to the revenue drop from the COVID-19 shutdown of the NHL.

The cuts will take effect on Saturday. The club did not specify how many employees would be affected.

Many other teams around the league have taken similar cost-cutting measures. NHL play was halted on March 12 due to the virus outbreak. The 24 teams that qualified for the revamped postseason are scheduled to start training camp on July 10.

The Wild were the first major Minnesota pro sports team to announce cutbacks.

The Southern Heritage Classic has canceled the Sept. 12 college football game between Tennessee State and Jackson State because of the coronavirus pandemic.

Founder Fred Jones said Wednesday he knows this is a great disappointment to those who see the classic as a major highlight of the year but that health and safety is a top priority. Jones encouraged people to keep practicing safety and social distancing so the game can return as soon as possible.

This is the second cancellation in three years for the Southern Heritage Classic, which is played at the Liberty Bowl Memorial Stadium in Memphis, Tennessee. The 2018 game was called due to poor weather.

The Liberty Bowl is home to the Memphis Tigers. The university expects to have only season-ticket holders at the Liberty Bowl for home games this season, with no single-game ticket sales planned.

Brazilian soccer will make its return on Thursday after a three-month suspension caused by the coronavirus pandemic.

The governing body of soccer in Rio de Janeiro says Flamengo and Bangu will play in an empty Maracanã Stadium in the local league.

More than 45,000 people have died with the virus in the South American country and health specialists say the peak of the crisis is yet to come.

Russian soccer club FC Rostov says its entire team and staff will go into isolation for two weeks after six players gave anomalous results in testing for the coronavirus.

The Russian league plans to restart its soccer season on Friday but the test results mean Rostov will miss at least two games.

Rostov is in fourth place and fighting for a spot in next season’s Champions League. It was scheduled to play Sochi on Friday.

The club says the six players gave results which “deviated from the norm” in coronavirus testing. The entire team and another 42 club employees were considered to have been in close contact with them.

Electronic line-calling will be used instead of line judges for U.S. Open matches at all courts except the two largest arenas.

There also will be three ball people instead of six at courts other than Arthur Ashe Stadium and Louis Armstrong Stadium.

Those are among the changes announced by the U.S. Tennis Association as it outlined plans for running its 2020 Grand Slam tournament amid the coronavirus pandemic.

There will be no mixed doubles, juniors or wheelchair competition during the Aug. 31 to Sept. 13 U.S. Open. There also will not be any qualifying rounds. Men’s and women’s doubles will be reduced from 64 teams each to 32 and only players not in singles may enter.

In each of the 128-player fields for men’s and women’s singles there will be 120 players who get in via their ranking and eight who receive wild-card invitations.

Players will be allowed up to three guests and up to two rooms at a pair of designated hotels. One will be paid for by the USTA and one by the player. There also will be the option for players to rent a house outside of Manhattan.

The USTA has not decided exactly how many entourage members will be allowed on-site at Flushing Meadows during the U.S. Open or the tournament that is being moved from Cincinnati and also staged at the Billie Jean King National Tennis Center from Aug. 21-28.

The French Open already was postponed from May to September because of the coronavirus pandemic and now is being pushed back an additional week.

The French Tennis Federation says its Grand Slam tournament’s main draw will be played at Roland Garros from Sept. 27 to Oct. 11.

That doubles the gap from the Sept. 13 end of the U.S. Open.

The French Open originally was moved from a May start to Sept. 20. Now its qualifying will begin Sept. 21 and finish on Sept. 25.

The federation says it is working with the French government to “set out suitable measures that will ensure the health and safety of all people present.”

The federation adds that “all options will be considered and are susceptible to change.”

The Rogers Cup men’s tennis tournament in Canada won't be played in 2020 because of the coronavirus pandemic.

Tennis Canada announced Wednesday that the event’s start date will be pushed back until Aug. 7, 2021. The annual ATP Tour event, which rotates between Toronto and Montreal, was scheduled to be played Aug. 8-16 in Toronto.

With the Rogers Cup 2020 women’s tournament in Montreal shelved earlier this month and rescheduled for next year in the same city, the men’s event also will remain in Toronto in 2021. Founded in 1881 as the Canadian championships, the men’s tournament has been held every year except for 1905, 1915-18 (World War I) and 1941-45 (World War II).

The Champions League will finish with a 12-day mini-tournament in Lisbon.

The tournament will restart in August after a five-month suspension caused by the coronavirus pandemic.

The UEFA executive committee says eight teams will play from the quarterfinals in knockout games at two venues.

The final will be held at the home stadium of Portuguese club Benfica on Sunday, Aug. 23.

The Europa League will also get an eight-team knockout tournament. It will be played in four stadiums in western Germany starting Aug. 10.

Formula E will resume with six races in Berlin to finish its season.

Formula E says the races will take place from Aug. 5-13 at the disused Tempelhof Airport in a series of two-day double-headers. No other races are scheduled.

Each pair of races in Berlin will use a different track configuration to provide some variety. There will be no spectators, mandatory coronavirus testing and a maximum number of 1,000 people on site.

Formula E got through five races before the season was interrupted by the coronavirus pandemic and most recently raced on Feb. 29 in Morocco. Portuguese driver Antonio Felix da Costa leads the championship with 28 points.

Formula E was scheduled to have a 14-race season. Races in London, New York and Paris are among those which will not be held this year.