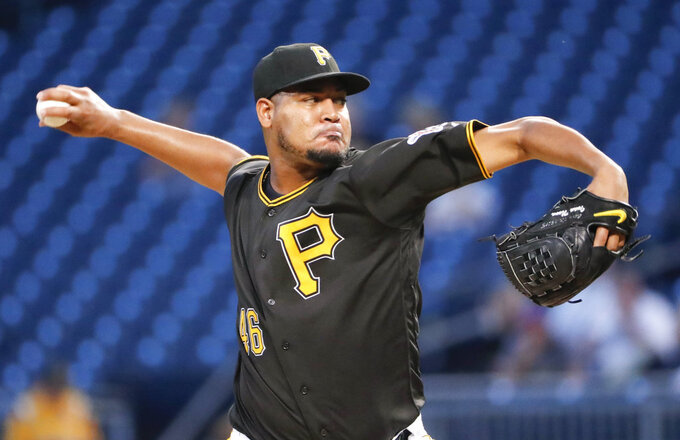 FILE - In this Sept. 21, 2018, file photo, Pittsburgh Pirates' Ivan Nova delivers against the Milwaukee Brewers in the first inning of a baseball game, in Pittsburgh. Nova has been acquired by the Chicago White Sox from the Pittsburgh Pirates for minor league pitcher Yordi Rosario and international signing bonus pool allocation. The trade was announced at the baseball meetings in Las Vegas Tuesday, Dec. 11, 2018. (AP Photo/Keith Srakocic, File) 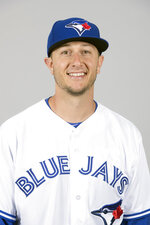 The Red Sox had the highest payroll in the majors for the first time in the free agent era. It was nearly $239 million in late August on Boston's way to a team-record 108 wins in the regular season.

Dombrowski says he thinks the team payroll will be over $246 million next year.

The Oakland Athletics have reached agreement with catcher Chris Herrmann on a $1 million, one-year contract.

General manager David Forst had put getting a catcher among his top to-do items, and the A's found one at the winter meetings.

Kyler Murray has lots of new fans in the Oakland A's organization, even if they cringe watching the Heisman Trophy winner play quarterback for Oklahoma.

The Athletics don't want their most recent first-round draft pick hurt on the football field because they're counting on him wearing an Oakland jersey come spring training.

Murray is a shifty runner, often dashing from the pocket for big gains. He'll next play Dec. 29 when he leads the fourth-ranked Sooners against bruising No. 1 Alabama in a college football semifinal.

"We are big Oklahoma fans right now, for sure. It's kind of tough to watch him scramble around a little bit sometimes. But still, it's exciting," Athletics manager Bob Melvin said.

An outfielder, Murray signed with the A's for $4.66 million.

The 27-year-old Wisdom made his major league debut last season, hitting .260 with four home runs and 10 RBIs in 32 games. He spent most of the season at Triple-A Memphis, hitting .288 with 15 homers and 61 RBIs.

The 26-year-old Robinson batted .183 with three homers and nine RBIs in 47 games for Texas. He is from Las Vegas, where this trade was announced during the winter meetings.

Former Texas pitcher Brandon McCarthy has been hired by the Rangers as special assistant to the general manager.

McCarthy ended his 14-year career by going 6-3 in 15 starts for the Braves last season. He pitched three years for Texas early in his career.

The Rangers say the 35-year-old McCarthy will be involved in all aspects of pitching development at the major and minor league level.

A flurry of offseason trades by general manager Jerry Dipoto sent so many stars out of the Pacific Northwest in the past month.

Whew! See why Mariners fans might understandably be a little apprehensive about the transformation, even after an 89-73 season that failed to end a nearly two-decade playoff drought — they were third in the AL West and missed the playoffs for a 17th straight season.

"We've made a few changes, but we had to make a decision organizationally where we were at," Servais said at the winter meetings. "We weren't quite good enough to get into the playoffs the last three years even though we won a lot of ballgames."

All-Star outfielder Andrew McCutchen and the Philadelphia Phillies have agreed to a $50 million, three-year contract, a person familiar with the negotiations told The Associated Press.

The person spoke to the AP on condition of anonymity because the agreement, which includes a club option for 2022, is subject to a successful physical.

McCutchen spent nine years with Pittsburgh before he was traded to San Francisco last winter. He was dealt to the New York Yankees on Aug. 31 and hit .255 with 20 homers and 65 RBIs in 155 games overall this year.

Philadelphia remains interested in Bryce Harper, the top free agent on the market, but has a surplus of outfielders, including Odubel Herrera, Nick Williams, Aaron Altherr and Roman Quinn.

Rhys Hoskins is moving from left field to first base after the team traded Carlos Santana to Seattle for infielder Jean Segura last week.

Troy Tulowitzki has been released by the Toronto Blue Jays, who owe the oft-injured shortstop $38 million for the remaining two years of his contract.

Now 34, Tulowitzki has not played in the major leagues since July 2017. He was limited that year to 66 games because of a hamstring and right ankle injury. The ankle required surgery last spring and he missed the entire season.

Tulowitzki was taken by Colorado with the seventh overall pick in the 2005 amateur draft and became a five-time All-Star. The Rockies agreed after the 2010 season to a $157.75 million, 10-year contract that added $132 million over seven seasons, then traded him in July 2015 to Toronto in the deal that brought shortstop Jose Reyes to Colorado.

While Tulowitzki helped the Blue Jays reach that year's AL Championship Series, he slumped the next year and then was derailed by injuries.

Right-hander Ivan Nova has been acquired by the Chicago White Sox from the Pittsburgh Pirates for minor league pitcher Yordi Rosario and $500,000 in international signing bonus pool allocation.

Nova has a $8.5 million base salary next year in the final season of a $26 million, three-year contract, then can become a free agent.

A 19-year-old right-hander, Rosario was 1-4 with a 2.57 ERA in 11 starts and three relief appearances last year in the Dominican Summer League and Arizona Rookie League. He struck out 70 in 56 innings.

The trade was announced Tuesday at the winter meetings.