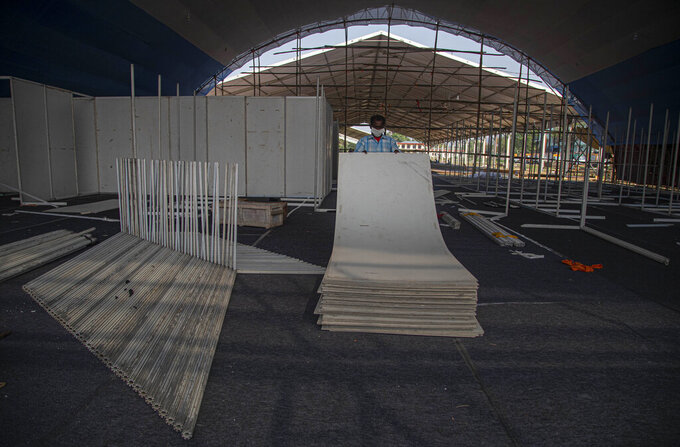 An Indian worker works at a quarantine center at the Sarusojai sports complex in Gauhati, India, Saturday, March 28, 2020. The new coronavirus causes mild or moderate symptoms for most people, but for some, especially older adults and people with existing health problems, it can cause more severe illness or death. (AP Photo/Anupam Nath)

Clemson quarterback Trevor Lawrence and his girlfriend have restarted their efforts to raise money for those affected by the new coronavirus.

They announced their decision Saturday on social media.

The two had set up a GoFundMe page earlier this week until told by Clemson compliance officials the site violated NCAA rules against using an athlete's name, image and likeness for crowd funding. But the NCAA said Tuesday that Lawrence and other athletes could use such sites to raise money in this case.

Lawrence's girlfriend, Marissa Mowry, is a soccer player at Anderson University, about 15 miles from Clemson's campus.

They created the “Trevor Lawrence and Marissa Mowry COVID-19 Relief Fund” designed to provide direct assistance to families affected by the pandemic.

The Colorado Avalanche say a second player has tested positive for the new coronavirus.

The team said it was informed Friday night and the player is in self-isolation.

In their statement Saturday, the Avalanche say those who came in close contact with the player have been informed and remain isolated.

The team says no other Avalanche player or staff member has shown symptoms at this time.

The unidentified player has become the fourth known NHL player to test positive for the virus. The other two are with Ottawa.

Two-time Grand Slam champion Naomi Osaka says she is disappointed that the Olympics in her native Japan were postponed because of the coronavirus pandemic, but she supports the decision to delay the Summer Games to 2021.

In a posting Saturday on social media, she said she's "been thinking about how to articulate my thoughts on this for a couple of days now."

The decision to push back the games from July and August 2020 until sometime next year was announced Tuesday.

Osaka wrote: "Sport will eventually unite us again and be there for us always, but that time is not now."

She also addressed "the people of Japan," where she was born, saying, "stay strong, hang in there and let's show the world our beautiful country when the time is right."

The 22-year-old Osaka figures to be one of the most-watched stars in Tokyo, given that she represents the host country and is a medal contender in tennis. She won the 2018 U.S. Open and 2019 Australian Open and became the first player from Asia to reach No. 1 in the singles rankings.

An A-League soccer player has become the first Australian professional footballer to test positive for the new coronavirus.

The unnamed player, who plays for the Newcastle Jets in New South Wales state, was tested Friday as a precaution before an international flight. He played in recent A-League matches against Brisbane and Melbourne City.

The player is now in quarantine and the A-League is suspended at least until April 22.

Soccer players and celebrities will take part in a global music festival on Saturday organized by the Spanish league in order to raise funds for the fight against the coronavirus.

Barcelona’s Gerard Piqué, Real Madrid’s Sergio Ramos and Sevilla’s Jesús Navas will be among the players involved in the charity event organized to raise money “for the purchase of medical supplies in the battle against the COVID-19 pandemic and to also support fans confined to their homes during the current period of quarantine,” the league said.

The soccer players and celebrities will all participate from their homes. The concert is to be shown live through the league's international broadcasters and streamed via YouTube and Facebook.

The “music extravaganza” will be broadcast in more than 180 countries simultaneously, starting at 1700 GMT (1 p.m. EST).

Barcelona has delivered 30,000 masks to the Catalonia government to help fight the coronavirus pandemic, the club said Saturday.

The masks were made in China and donated by insurance company Taiping, a regional partner of the club.

Barcelona said the “daily use” masks will be distributed to nursing homes.

The club added it is working through its foundation “to do as much as possible to help with this crisis, both locally and internationally.”

Spain, where stay-at-home restrictions have been in place for nearly two weeks, reported 832 more deaths on Saturday, its highest daily count yet, bringing its total to 5,690. Another 8,000 confirmed infections pushed that count above 72,000