The Latest: Cowboys owner confident about having fans 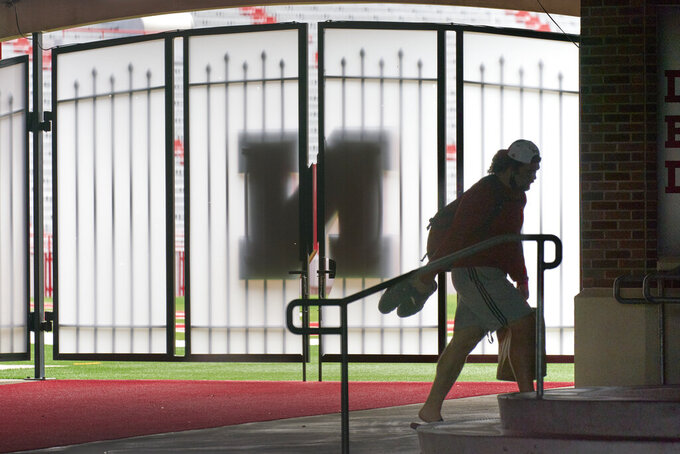 A player carries his shoes and a lunch bag in front of a closed gate leading to Memorial Stadium's playing field in Lincoln, Neb., Wednesday, Aug. 12, 2020. The Big Ten won't play football this fall because of concerns about COVID-19, becoming the first of college sports' power conferences to yield to the pandemic. The move announced Tuesday. (AP Photo/Nati Harnik)

Dallas Cowboys owner Jerry Jones is confident about having fans for all home games, and the club has now announced details toward that end.

The Cowboys say they are selling tickets in groups to try to prevent people who don't know each other from sitting together. The club says fans will only be able to transfer tickets between family and close friends. The Cowboys aren’t saying how big the groups can be.

Jones wouldn’t say how many tickets the team will try to sell. AT&T Stadium’s listed capacity is 80,000, and Texas coronavirus guidelines currently allow for 50% capacity. The Cowboys have already said they won’t sell season tickets in 2020.

The club is planning to allow tailgating while saying groups will be separated by at least one parking space. All ticketing will be on mobile apps, and all concession sales will be cashless.

All fans at least 10 years old will be required to wear masks “except when they are actively eating or drinking.”

The LPGA Tour says the Taiwan Swinging Skirts tournament scheduled for Oct. 29-Nov. 1 has been canceled due to advice from the Taiwanese government over coronavirus travel concerns.

The tournament was scheduled to be played at Miramar Golf Country Club in Taipei. The LPGA said it hopes to return in 2021. Earlier this week, the LPGA Tour also canceled the Buick LPGA Shanghai, scheduled for two weeks earlier, due to similar coronavirus concerns by the Chinese government.

The Horizon League has joined the list of conferences postponing all fall sports competition due to the coronavirus pandemic.

The Horizon League’s board of directors and council will decide later whether fall sports competition can take place in the spring instead. Individual league members will make decisions on training, practice and recruiting in accordance with NCAA regulations, as well as state and local guidelines.

The Southern Conference has canceled its fall conference seasons, shifting competition to the spring because of the pandemic.

The panel said any nonconference competition would be up to the individual school. The conference is made up of 10 schools spread across Alabama, North Carolina, South Carolina, Tennessee and Virginia. It competes in the Football Championship Subdivision.

“Ultimately, we felt it necessary to ensure the health and safety of student-athletes, coaches and staff,” Schaus said.

Tulane University officials say they're “actively pursuing” a new opponent for the school's Sept. 3 home opener after the Southland Conference announced on Thursday it was postponing football and all other fall sports.

Tulane had scheduled Southland Conference member Southeastern Louisiana for its season-opener at Yulman Stadium on the Thursday night before Labor Day weekend.

The Southland’s decision to postpone fall sports while investigating the possibility of playing in the spring has put the Green Wave’s first game in doubt.

Tulane plays in the American Athletic Conference, which for now has maintained its fall football schedule.

Tulane was scheduled to play 12 games before the Southland’s decision, which for now has at least temporarily reduced the Green Wave’s 2020 slate to 11 contests.

The West Coast Conference has postponed all conference fall competition because of the COVID-19 pandemic.

The conference announced the decision on Thursday, saying the “welfare” of the student-athletes was the “guiding principle.”

The league says it is working on plans to ensure a safe environment to conduct the 2020-21 WCC men’s and women’s basketball seasons in the winter.

The postponement does not preclude schools from scheduling non-conference competitions in low-risk sports in the fall.

Houston Baptist and Central Arkansas are still planning to play non-conference football games after the FCS-level Southland Conference decided Thursday to postpone league games this fall with the intent to explore playing those in the spring.

Southland Conference presidents also authorized planning for spring semester championship events for volleyball, soccer and cross country, while allowing schools to participate in limited fall competition if they choose to do so.

“While not unexpected, it is still a sad day for our fall sport student-athletes,” HBU athletic director Steve Moniaci said. “We are taking measures to ensure they can compete safely in a limited capacity this fall and be prepared should the league resume play and reschedule the championships for the spring.”

UCA athletic director Brad Teague said his school was “moving forward with its fall campaign in all sports, playing a reduced schedule.”

Tom Burnett, commissioner of the Southland Conference, said the board determined that an entire fall sports season wasn’t likely.

Five lower-level tennis tournaments in the United States in September have been called off because of the coronavirus pandemic.

The U.S. Tennis Association — which plans to hold the U.S. Open and another tournament in New York starting Aug. 20 — announced Thursday the cancellations of all ITF World Tennis Tour and ATP Challenger events in other cities around the country next month.

Those tournaments are ATP Challengers in Cary, North Carolina, and Columbus, Ohio, and ITF stops in Champaign, Illinois; Fayetteville, Arkansas; and Lubbock, Texas.

The USTA says the sort of “controlled environment” that will be used for the Western & Southern Open and U.S. Open in Flushing Meadows “would logistically and financially be difficult to create” at the smaller tournaments that are being scrapped.

New Mexico State has postponed its football season because of COVID-19 concerns and state restrictions.

The Aggies are the third independent FBS program to decide not to play in the fall, joining Connecticut and Massachusetts. They are the 53rd major college football program overall to opt out.

New Mexico State noted it had four games left on its schedule, plus the state of New Mexico has a 14-day quarantine for those traveling into and out of the state.

New Mexico State says it will explore playing football in the spring.

“Rival New Mexico has postponed its season as part of the Mountain West’s decision to attempt to play in the spring.

New Mexico State competes in the Western Athletic Conference for other sports, and that conference also announced it would not have fall sports this year.

Fans will be allowed into MotoGP races for the first time this season, at the Misano circuit in Italy next month.

The region of Emilia Romagna has given the circuit permission to open to a maximum of 10,000 fans a day for the doubleheader of the San Marino and Emilia Romagna MotoGP rounds.

There will be strict measures in place to protect against the coronavirus, and fans will not be allowed to roam around.

The circuit has a capacity of around 110,000 including more than 40,000 in the stands and welcomed approximately 160,000 people across the three-day weekend last year.

Organizers say in a statement: “It is a decision that makes us emotional because it also represents a green light for the restart of world sport finally in front of the fans.”

The first three MotoGP rounds were held without fans and no spectators will be allowed into the upcoming doubleheader in Austria.

French golfer Alex Levy has been withdrawn from the Celtic Classic, which started on Thursday.

Levy came into contact with a friend who has tested positive for the coronavirus, the European Tour said in a statement.

The contact happened while Levy was at home in France last weekend. When he arrived at Celtic Manor Resort in Wales on Tuesday, he tested negative. He is showing no symptoms, the tour said, but he has been withdrawn from the tournament as a precaution and must self-isolate for 14 days.