The Latest: Muschamp says this is his best Gamecocks team 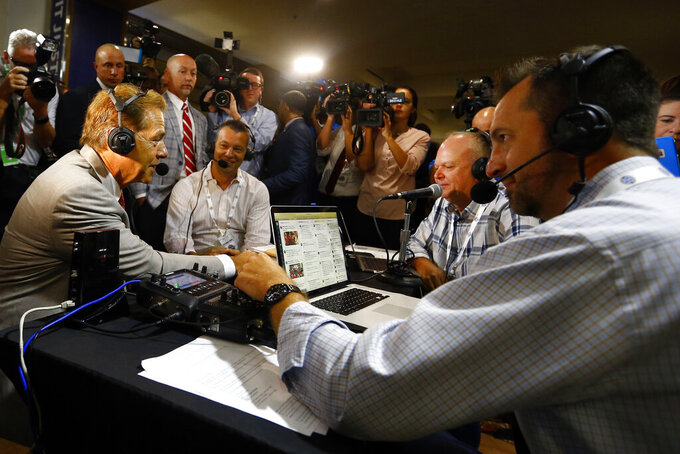 HOOVER, Ala. (AP) — The Latest on SEC media days (all times local):

Will Muschamp believes this will be his best South Carolina team.

If so, the Gamecocks might be able to reverse a trend of futility against ranked teams. Muschamp is 1-10 against Top 25 opponents with the Gamecocks over the past three seasons.

Quarterback Jake Bentley, a 32-game starter, said Wednesday at SEC media days they have "got to find a way to win those games." They'll get some chances with a schedule that includes defending Southeastern Conference champion Alabama and Texas A&M from the Western Division, along with division or in-state rivals like Georgia, Florida and national champion Clemson.

Muschamp says he doesn't worry about having a tough schedule, saying part of being in the SEC is to "have great opportunities every single Saturday."

The Gamecocks coach says reserve safety Jaylin Dickerson is out for the season with a labrum injury. Dickerson, who had 13 tackles last season, had surgery last week but Muschamp says the safety should be back in time for spring practice.

Mississippi State is hoping a graduate transfer quarterback can give a jolt to its struggling offense.

The Bulldogs added Tommy Stevens during the offseason. The 6-foot-5 senior was the backup at Penn State behind Trace McSorley before moving to Starkville.

The coach and QB are familiar with each other: Joe Moorhead was the offensive coordinator at Penn State before taking the Mississippi State job and coached Stevens early in his career.

Moorhead said on Wednesday at SEC media days that "Tommy is a kid with a lot of physical tools. Strong arm. He can really run. He's accustomed to the system so he's going to understand it for the most part coming in."

Stevens will compete with Keytaon Thompson for the starting job. Thompson was Nick Fitzgerald's backup last season and threw for 458 yards, six touchdowns and an interception.

Mississippi State finished with 8-5 record last season, including a 4-4 mark in the SEC. The Bulldogs scored just 16 total points in its four league losses.

Arkansas coach Chad Morris feels like his program is in a good spot entering his second year at the school.

He also says recruiting is a priority, even comparing recruiting to shaving at one point on Tuesday at SEC media days: "If you don't do it every day, you look like a bum."

Hicks played for Morris when he was the coach at SMU. Starkel was Kellen Mond's backup in College Station.

Morris said the battle for the starting job will linger into preseason camp, though he hopes it will be decided quickly "because I want our team to rally around that guy."

Arkansas finished with a 2-10 record last season, including a 0-8 mark in the conference.

Quarterback Tua Tagovailoa believes Alabama learned "many lessons" from the end-of-season drubbing at the hands of Clemson.

The Heisman Trophy runner-up says the team started to get satisfied and feel invincible after being scarcely challenged in the regular season. Then came the 44-16 loss in the national championship game that made that feeling look like a mirage in easily the most lopsided defeat of coach Nick Saban's tenure.

Tagovailoa said Wednesday at Southeastern Conference media days that he knows it sounds bad, "but I'm glad I had that opportunity to feel a loss like that, because what can you learn from winning? You can't learn as much. But when you lose, you start appreciating things a lot more. Many lessons have been learned from that loss."

Saban is counting on it with the Tide again among the national favorites. Even before the Clemson blowout, Alabama had to rally to beat Georgia in the SEC championship game.

The coach says his team didn't play with the kind of discipline or preparation it needed at the end of the season. Saban says there seemed to be "a lot of distractions," and like his quarterback, he's hoping the team learned its lessons.

Nick Saban takes the stage Wednesday with his team once again favored to repeat as SEC champion. But the Crimson Tide also wants to atone for how last season ended.

Alabama took the most lopsided defeat of Saban's tenure after absorbing a 44-16 drubbing from Clemson in the national championship game.

Both Tagovailoa and Jeudy will be on hand at media days, along with linebacker Dylan Moses.

Alabama will be followed by Arkansas coach Chad Morris, Mississippi State's Joe Moorhead and South Carolina's Will Muschamp, along with a few of their top players.