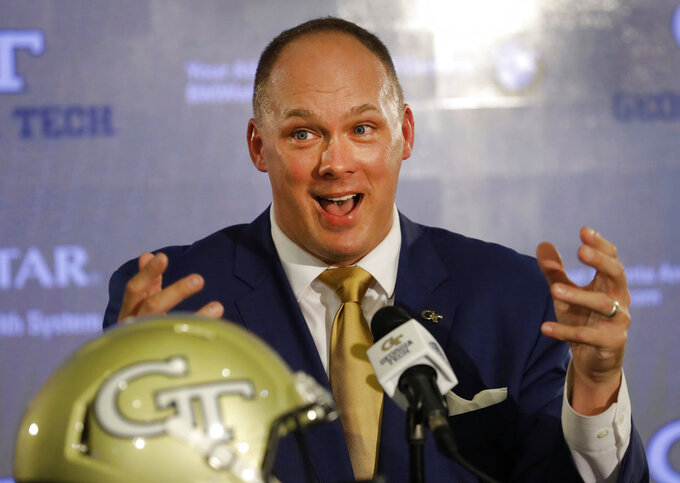 The Latest on the first day of the early college football signing period (all times Eastern):

Howell committed to the Seminoles in the spring, but announced he will instead play for the Tar Heels. Howell is a four-star prospect ranked by 247sports as the nation's No. 3 pro-style quarterback and No. 5 quarterback overall.

Howell's choice is good news for the Tar Heels considering they've had shaky QB play through the two seasons since Mitch Trubisky left for the NFL.

The news is also a big hit to Florida State, which finished 5-7 in its first season under coach Willie Taggart but still hoping to put together a top-10 signing class.

Wisconsin might have its next anchor on the offensive line with 6-foot-6 Logan Brown, a five-star prospect out of Grand Rapids, Michigan. He's a headliner in a good, 19-member recruiting class that is also highlighted by Graham Mertz, a four-star quarterback out of Overland, Kansas.

Coach Paul Chyrst is already talking about how Mertz, the Kansas 2018 Gatorade Player of the Year, has taken a leadership role in the class. The highly-touted Brown could be blocking for him in a year or two. Wisconsin has holes to fill at least at both guard positions with Michael Deiter and Beau Benzchawel leaving after the bowl game as seniors.

Another five-star for Alabama, this one a 390-pound offensive lineman from Florida. Evan Neal, one of the best overall prospects in the country, picked the Crimson Tide.

The SEC is in position to head toward the traditional signing period in February with the four best-ranked classes, according to 247 Sports' composite rankings of the major recruiting websites. Alabama is currently No. 1, followed by Georgia, Texas A&M and LSU.

Alabama added another five-star to what is already considered the best class in the country when running back Trey Sanders from IMG Academy in Florida picked the Crimson Tide over Georgia, Florida State, Texas and Florida.

The Tide is expected to win another recruiting national title after relinquishing the crown to SEC rival Georgia last season.

Texas was back to playing for the Big 12 title this season and Longhorns coach Tom Herman has gone well beyond the conference footprint to sign a recruiting class rated among the best in the nation.

Ten of the of the 21 players to sign with Texas on Wednesday come from outside the Lone Star State in a coast-to-coast recruiting effort stretching from Georgia and Florida to California.

The state of Texas has long been known to produce some of the nation's top high school football talent, and recruiting home-grown talent has long been the lifeblood of the program. A turf war with first-year Texas A&M coach Jimbo Fisher has been intense and Herman has insisted he will recruit nationally.

A&M seemed to win the in-state recruiting battle this year, signing seven of the state's top-20 recruits, as ranked by 247 Sports — more than any other school. Texas signed only

Harrison had played his recruitment relatively quiet and his announcement ceremony only streamed on his high school's website.

The Buckeyes' 2019 class is lagging behind its usual top-five standard, in part because it is likely to be a relatively small and in part because of the uncertainty this season surrounding outgoing head coach Urban Meyer.

Meyer announced earlier this month he will retire after the Rose Bowl on Jan. 1, giving the 39-year-old Day his first head coaching job. He has been Ohio State's offensive coordinator.

Landing Harrison, considered a top-15 player nationally, was a good sign for Day and the Buckeyes.

Cooper Dawson from South Carolina brought a friend with him to his signing ceremony, Kingsley Feinman, who was born with cerebral palsy and is in a wheel chair.

Dawson, a defensive end from Hannah High School, picked Syracuse over Clemson and UCF, and did so by first telling Feinman his choice and letting his friend make the announcement. Video of the announcement was shared by Scott Eisberg, the sports director for WCIV in Charleston, South Carolina, and the tweet had 15,000 likes in four hours.

Dawson told the crowd gathered at the high school that Feinman taught him the only disability was a bad attitude. Dawson missed his senior year with a leg injury, but said Feinman inspired him to keep a positive attitude.

Summerall drew some attention earlier this month when he posted photos on Twitter of himself and his father, dressed in Florida uniforms.

A late flip by a quarterback from Michigan effected Ohio State and Georgia and had some wondering if Justin Fields could have played a part.

Dwan Mathis from Belleville, Michigan, flipped from the Buckeyes to the Bulldogs, a day after Fields' name appeared in the NCAA's transfer database. Fields was a five-star recruit in the 2018 class and it has already been speculated that he could end up in Columbus, Ohio, next season, playing for new coach Ryan Day.

The uncertainty around Fields had Georgia scrambling to add a quarterback to its 2019 class.

Other notable decision on the first day of the early signing period were cornerback Elijah Blades, a top junior college recruit who signed with Texas A&M after been committed to Oregon. The Ducks, who are likely to have a top-10 class, also lost out on defensive back Jeremiah Criddell of California to Oklahoma.

Noah Cain, one of the top running backs in the country from IMG Academy in Florida, picked Penn State over Georgia and Auburn.

An early signing-day surprise: Dax Hill, a five-star defensive back from Oklahoma, flipped from Alabama and signed with Michigan. Hill had been verbally committed to Michigan but switched to Alabama a few weeks ago. Wolverines coach Jim Harbaugh lured him back when it mattered most.

Hill is the younger brother of Oklahoma State running back Justice Hill.

Not much drama was expected with another opportunity for prospects to sign in February, but the top schools figured to have most of their class of 2019 locked in by the end of the day. Maybe even before lunch.

The signed national letters of intent were rolling in as the sun rose, with schools and coaches using their Twitter feeds to celebrate the newcomers. Some more elaborate than others .

The second year of college football's early signing period promises to be busy, with most teams expected to lock up the bulk of their 2019 classes Wednesday and Alabama working on another recruiting championship.

Last season was the first with an early signing period in college football. It quickly replaced the traditional February signing period as the primary time for high school players to make their verbal commitments binding by inking national letters of intent. More than 70 percent of available scholarships in FBS were filled during the early signing period last year and coaches expected that to go up this year.

Based on verbal commitments, Alabama is lined up to again have the No. 1 recruiting class in the country after relinquishing that mythical title last year to SEC rival Georgia.