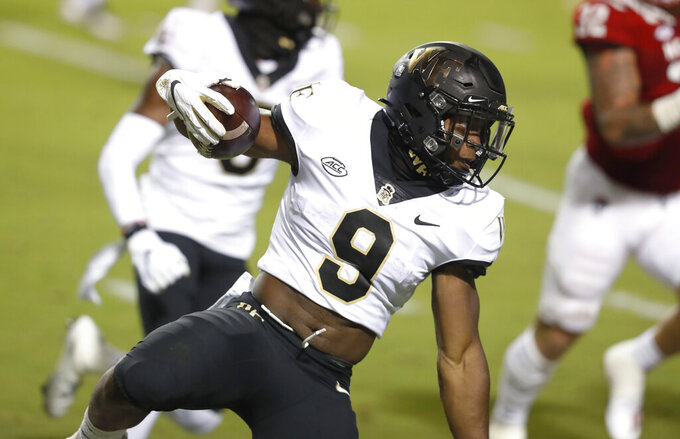 The postponed football game between No. 7 Notre Dame and Wake Forest will be moved to Dec. 12, while the Demon Deacons also are moving their nonconference game against Campbell a week earlier to Oct. 2.

The Atlantic Coast Conference announced the revisions Wednesday. That came one day after Saturday’s game between the Demon Deacons and Fighting Irish had to be postponed due to positive COVID-19 tests within the Notre Dame program, which put 13 players in isolation and 10 more in quarantine.

Wake Forest announced the home game with Campbell in late August, originally setting that matchup with the Big South Conference program for Oct. 9.

The ACC’s revamped scheduling model allows for 11 games to be played over 13 weeks through Dec. 5, as well as the possibility of playing Dec. 12. Another postponed game, Virginia-Virginia Tech, had previously been moved to that date as well.

USF said its team was tested twice last Friday, the day before a loss to the Fighting Irish in South Bend, Indiana, and again on Monday. USF says all those tests were negative, but it decided Wednesday “out of an abundance of caution” to do more tests and put practices on hold. More test were scheduled for Wednesday.

The International Judo Federation has canceled an event in Japan because of the coronavirus pandemic.

The IJF had announced a return to international competition after a months-long pause with Grand Slam events in Budapest, Hungary, next month and in Japan in December. They were intended to be part of qualification for the postponed Tokyo Olympics.

The Budapest competition now needs to be confirmed within two weeks “pending on a decision from the Hungarian government.”