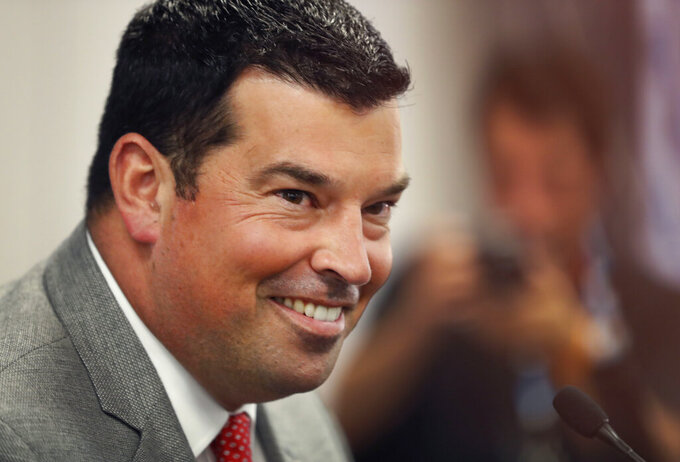 It's never too early for some Ohio State-Michigan sniping.

Cooper was asked about new co-defensive coordinator Greg Mattison, who spent 13 seasons under different coaches at Michigan, including the entire Harbaugh tenure. Cooper said Mattison is great and has a great legacy "with the team up north."

By refusing to name Michigan, Cooper was acting just like former Buckeyes coach Woody Hayes, who famously refused to mention his rival by name.

The Huskers' charter flight Thursday was delayed and, once it finally was in the air, was forced to land in Peoria, Illinois, about 170 southwest of Chicago. The weather ruled out a Chicago landing, which meant another flight to Gary, Indiana, and a car trip into Chicago. That second flight was a bumpy one, too.

Quarterback Adrian Martinez was there were times when the plane dipped — and so did their stomachs.

All of this made Nebraska late to Big Ten media days, but they made it in the end.

Michigan State welcomes back most of the pieces of the Big Ten's stingiest defense, which leaves plenty of room to fix an offense that often sputtered as the Spartans limped to a 7-6 finish last season.

There will be no doubt about who will be under center if coach Mark Dantonio can help it.

Brian Lewerke led the Spartans to a 10-3 season as a sophomore while throwing for almost 2,800 yards and 20 touchdowns against just seven interceptions. Injuries limited him to 10 starts last fall and his performance suffered, too. He finished the year with eight touchdown passes and 11 picks as Michigan State's offense managed just averaged 17.2 points in Big Ten play.

Rocky Lombardi won two of his three starts in Lewerke's place, but Dantonio said the redshirt sophomore will start the season second on the depth chart.

The defense allowed only 16.6 points per game in league play.

Outgoing Big Ten Commissioner Jim Delany says he thinks some serious mistakes were made in the 1970s that still create problems today.

Delany, who is in his 31st and final year as commissioner, kicked off Big Ten football media days by saying the loss of the four-year scholarship, the ending of the $15 weekly laundry stipend for athletes and allowing freshmen to play have all contributed to the issues in college athletics today.

In the mid-70s, the NCAA ruled schools no longer could provide athletes with a monthly living expenses stipend. "Cost of attendance" stipends have only recently been offered to athletes.

Delany will retire in 2020 and Kevin Warren will take over on Jan. 1.

Delany says he and Warren will begin working together in September.