The Latest: Packers to continue playing without fans 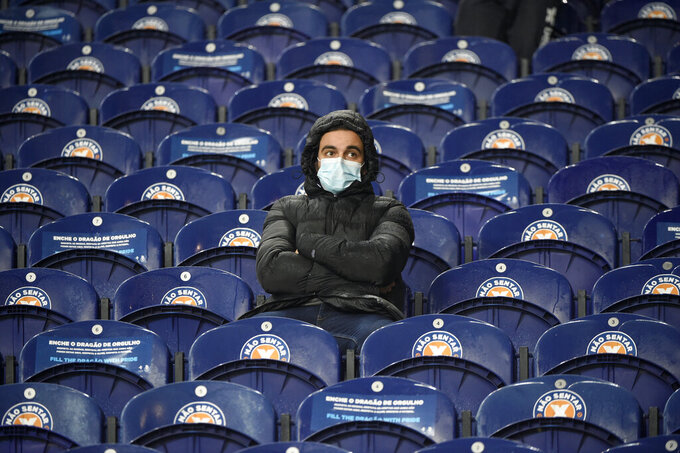 A fan wearing a face mask sits alone on the stands before the start of the Champions League group C soccer match between FC Porto and Olympiacos at the Dragao stadium in Porto, Portugal, Tuesday, Oct. 27, 2020. Only 3,750 fans were allowed on the stands. (Miguel Riopa, Pool via AP)

The Green Bay Packers say they will continue playing without fans at home games indefinitely due to the high levels of COVID-19 cases in the state of Wisconsin.

The Packers haven’t allowed spectators at any home games this season. Team officials announced Wednesday they also won’t admit fans to their next home game Nov. 15 against the Jacksonville Jaguars.

Packers officials said they won’t have fans at home games until COVID-19 rates in the area subside substantially.

The Packers plan to install face masks on the statues of former Packers coaches Curly Lambeau and Vince Lombardi in front of the Lambeau Field atrium Thursday to show support for front-line workers and encourage community members to wear masks.

Detroit Lions quarterback Matthew Stafford was placed on the Reserve/COVID-19 list, which was created for players who test positive for the coronavirus or who have been in close contact with an infected person or persons.

The Lions put linebacker Jarrad Davis on the list the previous day.

Before the Lions announced Stafford’s status on Wednesday after practice, coach Matt Patricia said there was no need to shut down the team’s training facility.

Some NFL teams have closed their training centers after players and or staff members tested positive for COVID-19.

Tulane says a limited number of tickets will be made available to the public for the Green Wave’s final two home games, against Army and Memphis.

Tulane has been allowing coach and player family members to attend home games in New Orleans this season as fan access has been limited across college football because of the coronavirus pandemic. More recently, Tulane began allowing students and band members into Yulman Stadium.

In addition to those spectators, the university announced Wednesday that 350 tickets will be made available for Army’s visit on Nov. 14.

The number of available tickets is expected to increase to 1,350 when Memphis visits on Nov. 28 because a number of students are expected to leave campus during Thanksgiving break, Tulane officials said.

Tickets for both games will be sold in groups of two or four to allow for social distancing throughout the stadium, which under normal circumstances holds about 30,000, the university said.

Total test results for the entire period of Aug 1-Oct 31 show 63 players and 99 other personnel were confirmed with positive cases. More than 550,000 tests were administered to players and personnel during that period.

Lampard says the Germany international is undergoing a period of self-isolation.

Havertz is also likely to miss Germany’s three upcoming games during the international break. The Germans play the Czech Republic in a friendly next week, followed by Nations League group games against Ukraine and Spain.

Conference USA has rescheduled seven football games that were postponed earlier this season because of COVID-19 issues. All will be played the first two weeks of December.

The updated schedule includes three games on Saturday, Dec. 5, the original date for the C-USA championship game that was previously rescheduled to Friday, Dec. 18.

UAB at Rice and North Texas at UTEP are now scheduled for Saturday, Dec. 12.

The University at Albany in New York's state capital has temporarily suspended all men’s basketball activities after an individual associated with the team was part of a pool of tests that came back presumptively positive for COVID-19 during routine pooled surveillance testing.

The university says the action is being done “out of an abundance of caution” while it awaits the results of diagnostic testing to confirm the result. The individual is in isolation and the school says no other teams’ activities are affected at this time.

A determination on when men's basketball can resume will be made pending additional test results.

To date, the university’s pooled testing program has analyzed more than 18,500 saliva samples with a presumed positivity rate of about 0.5%.

Lesesne is in isolation and is expected to return for next week’s Southeastern Conference tournament in Orange Beach, Alabama.

A cricket player in Pakistan has tested positive for the coronavirus.

The Pakistan Cricket Board did not name the player but it says he has been put in isolation at his team’s hotel in Karachi.

The player tested positive during a match in the Quaid-e-Azam Trophy tournament.

The board says all the other players, support staff and match officials taking part in the competition have tested negative.

The PCB has so far conducted more than 1,400 COVID-19 tests since resuming after a six-month break because of the pandemic.

Dynamo, Verl and Meppen say they have canceled training ahead of more coronavirus tests or rulings from local health authorities. Zwickau says it has only one positive test from a staff member and it won’t affect the team’s ability to play. Verl had two coronavirus cases last week.

Two games in the league have previously been rescheduled because of coronavirus testing results.

The lower leagues in Germany have been extensively disrupted by the pandemic. Most of the regional leagues have already suspended play under national lockdown measures which shut down non-professional sports. The leagues mix some fulltime professional players with part-timers from smaller clubs.