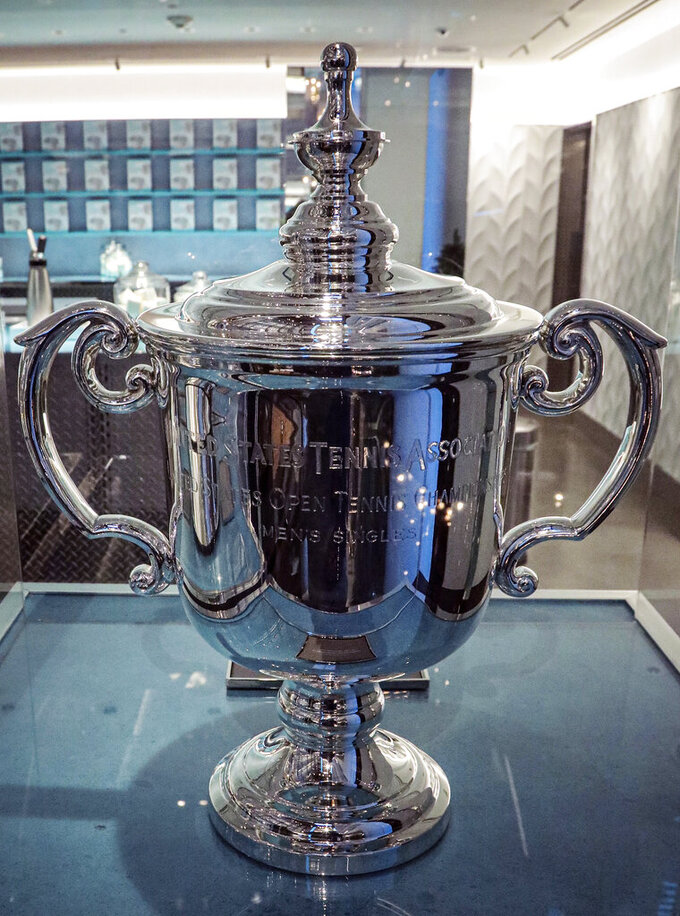 FILE - In this Dec. 6, 2019, file photo, the United States Tennis Association Men's U.S. Open Trophy, one of the world's most recognized sports trophies, is displayed at the Tiffany Men's Pop-Up store in New York. The USTA says it is overseeing a commitment of more than $50 million to help the sport deal with the effects of the coronavirus pandemic. (AP Photo/Bebeto Matthews, File)

Rutgers football players have had family members get sick with the coronavirus and some have dealt with a death, coach Greg Schiano says.

Speaking to the media for the first time since the COVID-19 pandemic shut down the Big Ten Conference university and its athletic programs last month, Schiano said Thursday his biggest concern is the health of his players and their families.

Schiano said none of his football players is known to have had the virus. Once he hears about a virus-related illness in a player’s family, Schiano telephones the player to ask how the school can help.

While the start of horse racing season at Belmont Park is being postponed from the original April 24 date, the New York Racing Association says it’s committed to holding the Belmont Stakes in this year.

NYRA on Thursday announced the spring/summer meet will be delayed but did not set a new opening day. It continues to assess options for the Belmont Stakes, scheduled for June 6, including shifting the third jewel of the Triple Crown to a later date.

The Kentucky Derby has already been rescheduled from May 2 to Sept. 5. The Maryland Jockey Club has canceled infield activities for the Preakness Stakes in Baltimore but not announced whether it would be held May 16 or a later date.

Racing at Belmont Park is scheduled to go on through July 12 before New York racing shifts to Saratoga in upstate New York.

The new CEO of the U.S. Tennis Association says he expects a decision on the status of the 2020 U.S. Open to be made by June and calls the prospect of holding the Grand Slam tournament without spectators because of the coranivirus pandemic “highly unlikely.”

Mike Dowse, whose term began on Jan. 1, said in a conference call with reporters Thursday that “time is on our side at this point” because the U.S. Open is not scheduled to begin until late August.

It would be the next major tennis championship on the calendar because the French Open’s start was postponed from May until September and Wimbledon was canceled altogether.

The men’s and women’s tennis tours are on hold entirely until at least mid-July, and one tournament in August already has been scrapped.

As for holding the U.S. Open with no fans, Dowse said the USTA is “not taking anything off the table, but right now, I’d say that’s a highly unlikely scenario.”

He did add that the USTA “may reconsider.”

The International Skating Union has formally canceled its figure skating and short track world championships because of the coronavirus pandemic.

The ISU made the decision after an online meeting of its governing council.

The World Synchronized Skating Championships in Lake Placid, New York have been formally canceled as well. That event was originally set for April 3-5.

The ISU plans another online meeting April 28 to discuss scheduling possibilities for the 2020-21 skating season.

The Home Plate Project initiative was originally scheduled to launch its second year in the fall. But Brooks, Wainwright and Gibson saw the urgency now to provide meals for children who rely on free or reduced-price meals at schools that are closed because of the pandemic.

Wainwright founded Big League Impact in 2013. He says the big leaguers felt the need to jump in right away to help feed kids in their cities.

Italian second-division soccer club Ascoli has fired its coaching staff because of the economic crisis caused by the coronavirus pandemic.

Ascoli says it made the decision only after coach Roberto Stellone and his staff refused to terminate their contracts consensually with a settlement agreement.

The Serie B team says the move is part of measures being taken to “safeguard” the squad’s future “amid the temporary situation we are experiencing.”

Stellone was hired in February to replace Paolo Zanetti. The former coach and his staff are still under contract with the club.

Youth team coach Guillermo Abascal has been promoted to direct the first squad.

Ascoli is in 15th place in the 20-team division.

No soccer games have been played in Italy since March 9. That was when the government ordered a nationwide lockdown. The lockdown is set to expire after May 3.

Former NFL coach Don Shula and three of his former Miami Dolphins players are providing free meals to those seriously affected by the coronavirus crisis. The program is funded by a $250,000 grant from team owner Stephen Ross.

Shula, John Offerdahl, Kim Bokamper and Bob Brudzinski -- all involved in the restaurant business -- have teamed to help deliver breakfast, lunch or dinner to those most at risk.

Mike Conley Jr. expected to spend this week starting a quest for a championship with the Utah Jazz.

He’s playing for the NBA HORSE title instead.

Conley is one of four semifinalists in the tournament. The conclusion will be streamed Thursday night on the ESPN platforms. The other semifinalists are retired NBA champion Chauncey Billups, Chicago Bulls guard Zach LaVine and WNBA All-Star Allie Quigley of the Chicago Sky.

The HORSE tournament was born to give basketball-starved fans some content and Conley says it scratched his itch to be competitive again as well.

Conley says “HORSE is something that we’ve all played growing up and it’s something I actually play after most of my workouts in the summertime.”

Conley adds “I like to still have fun and throw shots off the backboard, the walls, bounce stuff in. It’s just good to get the creative juices flowing again and I know all the competitors are feeling that way.”

The Canadian Open golf tournament has been canceled because of the to the coronavirus pandemic.

The event was scheduled for June 8-14 at St. George’s Golf and Country Club in Toronto.

The Canadian Open is the third oldest event on the PGA Tour schedule behind the British Open and the U.S. Open.

The French soccer federation is preparing a rescue package for its 14,000 amateur clubs.

The FFF says it will announce its “massive support plan for amateur soccer” in the coming days. It says the plan will support clubs when their leagues restart next season.

The FFF canceled all its leagues this season because of the coronavirus pandemic except the third division and the women’s first division. The top two men’s leagues in France and the League Cup are run by the LFP.

The French Cup final on April 25 and the women’s French Cup semifinals on March 21 have been postponed but not canceled.

The U.S. Tennis Association says it is overseeing a commitment of more than $50 million to help the sport deal with the effects of the coronavirus pandemic.

The USTA says it is shaving more than $20 million from its budget by reducing salaries of its management and eliminating programs in player development and marketing.

The group that runs the U.S. Open says the total future support provided by the USTA and its industry partners for the sport at the grassroots level “will be determined by the financial performance” of the 2020 Grand Slam tournament in Flushing Meadows.

The USTA says it still plans to stage its tournament as scheduled from Aug. 31 to Sept. 13.

The U.S. Open would be the next major tennis championship on the calendar after the French Open was postponed and Wimbledon was canceled.

The WTA and ATP professional tours are currently suspended until at least July and one tournament in August already has been called off.

World Rugby is offering a $100 million relief fund for national unions distressed by the coronavirus pandemic.

World Rugby says “it is designed to assist the maximum number of unions for the maximum amount of time while there is a rugby void.”

The body adds “the financial package will potentially involve a combination of advances and loans” for Six Nations and Sanzaar unions and that “World Rugby is also committed to supporting emerging nations and regional associations where required.”

The Indian Premier League has been suspended indefinitely because of the coronavirus pandemic.

The IPL has become cricket’s primary annual competition in April and May but India this week extended the world’s biggest lockdown to May 3. That has dashed hopes by the Board of Control for Cricket in India of a shortened IPL in May possibly without spectators.

The BCCI bowed to the inevitable to suspend the Twenty20 competition until further notice.

BCCI honorary secretary Jay Shah says “the health and safety of the nation and everyone involved in our great sport remains our top priority and ... the IPL 2020 season will only commence when it is safe and appropriate to do so.”

The eight-week IPL was to begin on March 29 but was then pushed back to April 15.

Nice coach Patrick Vieira has been thanked by the city’s mayor for donating 250 iPads to elderly people in four public care homes.

The 43-year-old Vieira is a former player who won the 1998 World Cup with France.

Mayor Christian Estrosi says “together we’re always stronger and I thank Patrick Vieira and Nice for their generosity.”

Estrosi says the tablets are essential in helping people maintain contact with their families “and limit the isolation of our elders during the confinement period.”

Up to 1,200 meals per day are being prepared in the kitchens of the Parc des Princes in western Paris. They are then delivered by volunteers from the Street Food en Mouvement (Street Food on the Move) association.

Volunteers from the association have used the stadium kitchens since April 9. Four trucks have been used to take more than 5,000 meals to seven hospitals.

PSG president Nasser Al-Khelaifi says the hospital workers are “true heroes” who should continue to be applauded.