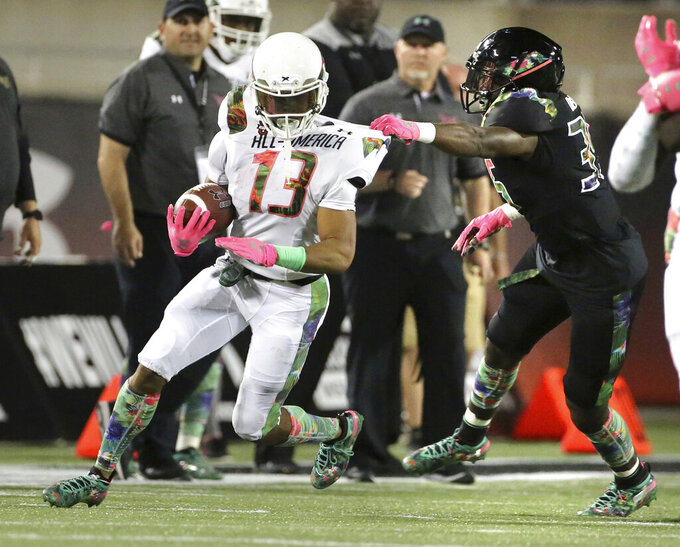 FILE - In this Jan. 3, 2019, file photo, Team Flash running back Jerrion Ealy, left, gets snagged by a defender during the Under Armour All America Game in Orlando, Fla. Some drama on signing day might be drummed up around the few remaining unsigned five-star prospects. Darnell Wright, an offensive lineman from West Virginia, is expected to choose between Tennessee and Alabama. Ealy, a running back from Mississippi, will pick between Clemson and Ole Miss. (Joe Burbank/Orlando Sentinel via AP, File)

The Latest on national signing day (all times Eastern):

Tennessee has added a pair of top-50 recruits with offensive tackle Darnell Wright and linebacker Henry To'oto'o both choosing the Volunteers.

The additions of Wright and December signee Wanya Morris (28th in the 247Sports Composite) should provide a big boost to a Tennessee offensive line that has struggled mightily the last two seasons.

To'oto'o is ranked 44th in the 247Sports Composite. Tennessee beat out Alabama and Washington for the California prospect.

Syracuse has signed defensive lineman Jason Munoz, a nice get for coach Dino Babers, whose Orange won 10 games and finished ranked No. 15.

Munoz, of Hollywood, Florida, originally inked with Miami during the early signing period but changed his mind after Mark Richt resigned as head coach.

New Miami coach Manny Diaz opted to grant Munoz his release from the program and Munoz decided on Syracuse after a visit. He was one of four players to sign with the Orange on Wednesday.

"We got into some crucial battles down to the end," Babers said. "I think that those gentlemen can see maybe down the road where this program is going and maybe it helped them make a choice ... to come up north instead of going somewhere else."

Clemson has brought in the twin sons of ESPN announcer Kirk Herbstreit to its national championship program. The Tigers added wide receiver Tye Herbstreit and defensive back Jake Herbstreit as preferred walk-ons.

Does this mean their dad has to say nice things about the Tigers on his broadcasts? "I don't think it works that way," Clemson coach Dabo Swinney said. "We have our job to do and he has his."

Laviska Shenault Jr. was one of the best receivers in the country through the first half of last season but a foot injury all but ruined his second half and was part of the reason Colorado failed to make a bowl.

Alabama and LSU routinely compete for recruits, especially on the Tigers' turf in Louisiana. The Crimson Tide scored a big win on signing day when four-star defensive tackle Ishmael Sopsher from Amite High School decided to leave the state for college.

The Tide will have some holes to fill on the defensive line with Quinnen Williams, Raekwon Davis and Isiah Buggs off the NFL. The 330-pound Sophser could see some early playing time at Alabama.

Less than a week after dismissing Deondre Francois, Florida State continues to have quarterback issues.

That comes after top-100 prospect Sam Howell signed with North Carolina in December. Howell had been verbally committed to Florida State for several months before signing with the Tar Heels.

The signing of the 6-foot-5, 263-pound guard cushions the blow of the Buckeyes losing four-star offensive lineman Doug Nester, who flipped to Virginia Tech on Wednesday.

Vimahi is listed as the No. 7 guard and No. 124 player in the nation in 247Sports.com's composite rankings.

Mississippi has landed an elite running back prospect by beating out Alabama and Clemson for Jerrion Ealy.

Ealy is the nation's No. 29 overall prospect in his class according to composite rankings of recruiting sites compiled by 247Sports.

Ealy also is a talented baseball player and a potential first-round pick in June's draft, which could force him into deciding whether to play football at Ole Miss or launch a professional baseball career.

Les Miles recruited Thomas MacVittie hard coming out of high school while he was still the coach at LSU, only to watch the big pro-style quarterback honor his commitment to Pittsburgh.

Miles, now the coach at Kansas, will finally get an opportunity to tutor him.

After a stint at Mesa Community College, MacVittie has signed with the Jayhawks and will serve as the centerpiece of a recruiting class that Miles hopes will serve as the foundation of a massive rebuilding effort.

Georgia has added another five-star player to its recruiting class with wide receiver George Pickens, who was committed to Auburn before choosing the Bulldogs.

The 6-foot-4 Pickens went to Hoover (Alabama) High School. He becomes Georgia's 23rd signee and the fifth five-star player in the class.

There will be opportunity for Pickens to play immediately. Georgia lost juniors Riley Ridley and Mecole Hardman to the NFL draft. Georgia signed receivers Dominick Blaylock and Makiya Tongue in the December early period.

Georgia already has 14 early enrollees. Georgia had the nation's top-ranked signing class in 2018 and was ranked behind only Alabama in the 247Sports composite ranking through the early signing period this time.

Alabama already has the No. 1 recruiting class in the country locked up so losing a four-star or two on signing day is no reason to worry about the Crimson Tide. After having defensive end Khris Bogle flip from Alabama to Florida early in the day, another former Tide commit decided to sign elsewhere.

It wasn't shocking that defensive back Christian Williams, from Daphne, Alabama, signed with Miami, but it was an important get for the Hurricanes. New Miami coach Manny Diaz took advantage of the staff turnover at Alabama to land the four-star cornerback.

Late coaching changes after the early signing period can cause high school player to reconsider their commitments. For example, Isheem Young, a four-star safety recruit out of Philadelphia, was verbally committed to West Virginia, but after Dana Holgorsen left Morgantown to become coach at Houston, Young started shopping around again.

Young signed at Iowa State, boosting a class that has a chance to be the highest rated since Matt Campbell took over three years ago.

For Young, Iowa State is also giving him a second chance. He was arrested and charged in connection with a robbery in Philadelphia. Pennlive.com reported that Young pleaded guilty on three counts, including robbery, conspiracy and possession of an instrument of crime, in May. Young, who was 17 at the time of the incident, also agreed to be adjudicated delinquent and to be committed to a juvenile facility.

Campbell says Young is a "highly motivated young man who has expressed tremendous gratitude for the opportunity" to join the Cyclones.

The first notable flip on signing day was good news for Florida. Khris Bogle, a pass rusher out of Fort Lauderdale, had committed to Alabama during a national high school all-star game last month. But on signing day Bogle, a four-star prospect, signed with coach Dan Mullen's Gators.

Florida is lining up a potential top-10 class that could give the Southeastern Conference five of the 10 best 2019 recruiting hauls, joining Alabama, Georgia, Texas A&M and LSU.

Virginia Tech also made some news early in the day, landing offensive lineman Doug Nester from West Virginia. Nester had verbally committed to Ohio State in 2017 and Penn State was also pushing for him.

Signing Day Part II is here and while nobody is catching Alabama for the recruiting crown, there is still some work to be done and a few blue-chippers to sign.

About 80 percent of available scholarships in FBS were scooped up during the early signing period in December. The traditional February signing period, which begins Wednesday, is more of an afterthought.

Some drama might be drummed up around the few remaining unsigned five-star prospects. Darnell Wright, an offensive lineman from West Virginia, is expected to choose between Tennessee and Alabama. Jerrion Ealy, a running back from Mississippi, will pick between Clemson and Ole Miss.

Miami and Southern California are trying to recover from underwhelming Decembers, and Florida State looks to finish strong after a disappointing first season under Willie Taggart.