The Latest: UCLA has 3 positive tests in athletic department 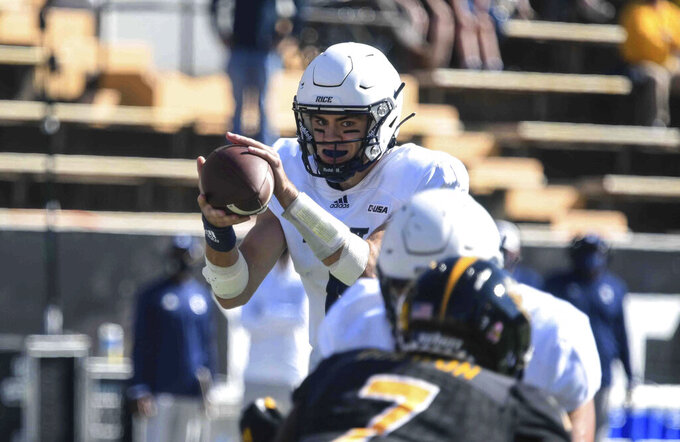 UCLA’s athletic department has had three people test positive for the coronavirus, including a football player.

The Pac-12 Conference has already postponed two games, but the Bruins’ season-opening matchup at Colorado is still on. Players will be tested before kickoff per conference policy.

UCLA, which is issuing testing updates every Friday, also reported a rowing team member and a support staff member within the athletic department have tested positive.

The Detroit Lions had a staff member test positive for COVID-19 and the team entered the league's intensive protocol.

The unidentified staffer immediately self-quarantined and had not been in the Lions' practice facility for the last 48 hours.

“We will continue to take precautionary measures at our Allen Park practice facility,” the Lions said in a statement. "The health and safety of our players, coaches and staff remains our top priority. We will continue to follow the guidance of the NFL, its medical staff and our team doctors as we prepare for Sunday’s game against Minnesota.”

For that game, Detroit WR Kenny Golladay (hip) has been ruled out, along with DBs Jamal Agnew (ribs) and Tracy Walker (foot).

The list is for a player who has tested positive or has been in close contact with an infected person.

Barnes played in the Packers’ 34-17 victory over the San Francisco 49ers on Thursday night. The Packers announced in the first half he had left with a calf injury.

Two Conference USA games scheduled for this weekend have been postponed due to COVID-19 positive tests and contact tracing protocols.

Charlotte’s game at Middle Tennessee and UTSA’s visit to Rice have both been called off. In all, nine Bowl Subdivision games this week were either canceled or postponed because of the coronavirus pandemic, bringing the total to 46 since Aug. 26.

“We are extremely disappointed to have to postpone our game at Middle Tennessee,” said Mike Hill, the 49ers athletic director. “The health and safety of everyone involved, however, remains the top priority during these challenging times.”

Attempts will be made to reschedule both games.

“After a great win last week at Southern Miss, I know our team was excited to get back on the field at home and renew the series with UTSA,” Rice athletic director Joe Karlgaard said. “But the virus remains a constant challenge to our efforts to play this season.”

The team said in a statement that players have not been in the facility since Wednesday and will not return until next week. The Bengals have a bye week and don’t play again until Nov. 15.

Even with an off week, players had to remain in Cincinnati and are being tested for the coronavirus daily. The players with positive tests were not identified.

The Bengals beat the Tennessee Titans last week and are 2-5-1 at the season’s halfway point.

Ifedi was placed on the list along with backup offensive tackle Jason Spriggs on Tuesday. Coach Matt Nagy said this week that Spriggs tested positive for the coronavirus and Ifedi was put on the list because of a close contact.

The Bears canceled practice and closed their facility Thursday after another player tested positive. The team was cleared that night by the NFL to practice Friday.

Chicago plays at Tennessee on Sunday.

Italy coach Roberto Mancini has tested positive for the coronavirus days before the international break.

The Italian Football Federation says Mancini shows no symptoms and is self-isolating at his home in Rome.

The Italy squad will meet up on Sunday. It plays an international friendly against Estonia on Wednesday, and hosts Poland in the Nations League four days later.

The Atlanta Falcons canceled practice and worked virtually Friday after a member of the football staff tested positive for COVID-19.

The Falcons said the move was “out of an abundance of caution” while contact tracing is used to determine if anyone else might have been exposed.

The team expects to play Sunday’s game against the Denver Broncos.

A Miami Dolphins assistant coach tested positive for COVID-19 and was quarantined, and the team entered the NFL’s intensive protocol, the Dolphins said in a statement Friday.

The identity of the coach was not revealed.

It was the first coronavirus case involving the Dolphins since Aug. 19, but their regular-season schedule was changed because of outbreaks involving other teams.

The Houston Texans returned to their facility on Friday, a day after it was closed following a positive COVID-19 test by a player.

Interim coach Romeo Crennel said the team had no more positive tests and it would resume practice Friday for Sunday’s game at Jacksonville.

Linebacker Jacob Martin’s positive test on Wednesday night forced the closure of the facility Thursday. Linebackers Whitney Mercilus and Dylan Cole will also miss Sunday’s game after the NFL determined they had been in close contact with Martin.

Jockey Christophe Soumillon has left Keeneland and is in isolation after positive PCR COVID-19 tests.

A statement from the Breeders’ Cup says the French rider was tested Wednesday and is not showing symptoms. Those he came in contact with since arriving have received negative results after additional testing. Connections for both horses have also been notified.

Soumillon was scheduled to ride Irish horses Order of Australia in the Breeders’ Cup Mile and Tarnawa in the Turf. His positive test was the only one of 55 given to all Breeders’ Cup jockeys.

The top two divisions in Czech soccer will be allowed to restart after a month break caused by the coronavirus pandemic.

Sports competitions were stopped in the Czech Republic on Oct. 12 amid a record surge in virus infections.

The government has agreed to allow exceptions under strict conditions. Soccer will be the first to resume. The games will be played in empty stadiums.

The top division says all players and staff will have to undergo virus tests between games. The league will restart with a match between Jablonec and Brno on Friday.

Czech clubs Sparta Prague, Slavia Prague and Liberec were allowed to play in the Europa League despite the ban on games in the country. They all currently have several players who have tested positive for the coronavirus.