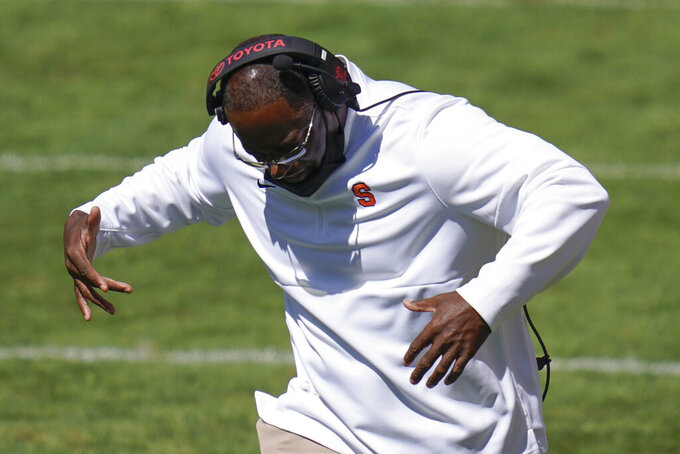 Syracuse head coach Dino Babers yells to his team as they play against Pittsburgh during the second half of an NCAA college football game, Saturday, Sept. 19, 2020, in Pittsburgh. Babers is in the midst of a second straight subpar season and not much relief is in sight. (AP Photo/Keith Srakocic)

Trevor Lawrence has been at his best from the start for top-ranked Clemson.

The junior is again putting up big numbers but avoiding interceptions that plagued him early last season, which has the Tigers’ offense humming at a pace difficult to match. That’s why the Heisman Trophy candidate and potential No. 1 overall NFL draft pick was picked as the Atlantic Coast Conference’s top offensive player through the season’s first half in voting by The Associated Press writers covering league teams.

Lawrence received seven of nine votes. Backfield teammate Travis Etienne – a two-time ACC player of the year and Heisman candidate himself – had two.

Most notably, Lawrence is playing nearly mistake-free football for the Bowl Subdivision’s No. 3 scoring offense (48.4).

After a national-title run, Lawrence threw 14 touchdowns with eight interceptions through last season’s first seven games. This year, he has thrown for 15 scores with one interception for the Tigers (5-0, 4-0 ACC), ranking second in FBS in TD throws despite having just 37 second-half passes all year – 11 in the fourth quarter – in Clemson’s lopsided victories.

“It’s like a shooter (in basketball) or a hitter in baseball: you’ve got to let him work through those things,” Clemson offensive coordinator Tony Elliott said. “But we’re blessed right now that Trevor is taking care of the football.”

As the league’s coronavirus-altered schedule crosses the midway point, here are some of the ACC’s best, worst and most notable developments so far in voting by AP writers:

The Hokies (3-1, 3-1) started without 23 players and two full-time coaches amid a combination of coronavirus and injury issues against North Carolina State, including starting quarterback Hendon Hooker. That number has gradually declined, hitting 13 players last weekend against Boston College.

“With all the players they’ve missed and all the coaches they have missed, and to be here 3-1 and playing at the level they are, that’s a really good coaching job,” Wake Forest coach Dave Clawson said.

Pittsburgh defensive end Patrick Jones II has an FBS-best seven sacks, including three against both Louisville and Boston College. The two-time ACC defensive lineman of the week has helped the Panthers rank seventh nationally in total defense (274.7 yards).

Georgia Tech true freshman Jahmyr Gibbs has provided steady production at running back. He missed the opener, but has run for a team-high 299 yards – including 105 against Syracuse – and has 605 all-purpose yards with five offensive touchdowns in four games.

Kansas graduate transfer Khalil Herbert is averaging an FBS-best 148 yards rushing for Virginia Tech. Herbert had a 291-yard performance in 2017, but had just three 100-yard outings in 35 career games with Kansas. He’s already had four with the Hokies and had 357 all-purpose yards – most in FBS this year – at Duke.

N.C. State (4-1, 4-1) was picked to finish 11th in the 15-team league, but sits at No. 23 in the AP Top 25 after a start that includes road wins against then-ranked Pittsburgh and Virginia. And after Saturday’s trip to 14th-ranked rival North Carolina, N.C. State closes with four of five at home.

Louisville won eight games in Scott Satterfield’s debut season and was picked fourth in the ACC, but the Cardinals (1-4, 0-4) have struggled with defensive and pass-blocking issues to sink to the bottom of the standings.

Syracuse coach Dino Babers led the last ACC team to beat Clemson (in 2017) and won 10 games in 2018, securing him a contract extension. But the Orange (1-4, 1-3) have lost 11 of 17, while preseason AP All-American safety Andre Cisco recently opted out of the rest of the season after a freak pregame injury.

“I know there’s better days to come,” Babers said, “and hopefully I’m here to get to see all of it.”

Devin Leary’s second-year development as N.C. State’s starting quarterback helped fuel the Wolfpack’s climb. But Leary had surgery Sunday for a broken left leg suffered against Duke. The projected recovery time is four to eight weeks, leading coach Dave Doeren to say Leary is “probably” out for the regular season.