Leach: Washington St needs to focus on improving every week 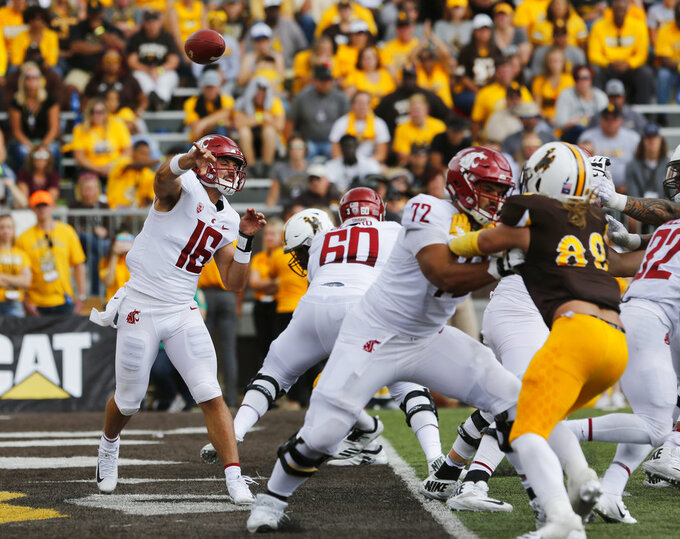 PULLMAN, Wash. (AP) — Washington State's next opponent is San Jose State but coach Mike Leach says his Cougars should be focusing on themselves.
"The biggest thing and most important thing is to worry about yourself and try to get better," Leach said. "We need to get a week better this week. That's what we need to focus on."
A week after opening the season with an impressive 41-19 victory at Wyoming, Washington State (1-0) is a five-touchdown favorite over the Spartans (0-1), who lost to UC Davis of the FCS in their opener.
The Spartans are 45-152 all-time against Pac-12 opponents. But the Cougars have lost home openers to Portland State and Eastern Washington in recent years, so they can't be too confident.
"They've got some explosive guys," Leach said. "Early in the season, they are trying to find their identity like everybody else."
Washington State trailed Wyoming 19-13 early in the second half last week before an impressive finish as the Cougars notched their first season-opening win on the road since 2004.
The Cougars finished with 320 passing yards and 74 rushing yards against Wyoming. Highly touted freshman running back Max Borghi had a receiving TD and another on the ground.
Questions about the Washington State defense under new coordinator Tracy Claeys were answered as the Cougars gave up just 206 total yards, and only 67 passing yards. Wyoming scored just three points in the second half.
San Jose State coach Brent Brennan said the Washington State secondary is outstanding and the defense continues to improve each year.
The Spartans, meanwhile, are continuing to try to build a quality program, Brennan said.
"You have to flush it and get ready for the next one," Brennan said of the loss to UC Davis. "We need to take a deep breath, walk out on that stage and execute at a high level."
Josh Love started at quarterback for the Spartans last week, throwing for 109 yards and a touchdown. Montel Aaron relieved him, throwing for 254 yards and two touchdowns in the loss. It's not clear who will start this week.
The Spartans defense gave up 589 yards to UC Davis, and will be challenged by the Cougars' Air Raid offense.
"As an offense, you know, they're hard to stop," Brennan said.
Other things to know as Washington State opens its home schedule against San Jose State:
HONORING HILINSKI: This will be the Cougars' first home game since Washington State quarterback Tyler Hilinski took his own life last January. The Cougars will remember Hilinski this season by wearing decals with his No. 3 on their helmets and maintaining his locker. A Hilinski's Hope flag, advertising the foundation started by Hilinski's parents, will be displayed inside the stadium. The Hilinski family will raise the Cougar flag prior to Saturday's game. "One of our brothers isn't here playing with us. We're always going to remember Ty," defensive back Hunter Dale said. "The season is dedicated to him."
MICROSOFT ASSIST: An engineer for Seattle-based Microsoft is helping Leach design some plays this season. The Cougars used a trick play designed by the engineer twice in last weekend's win, netting a total of nine yards. "He's got a lot of ideas," Leach said. "So he came up with a bunch of formations."
GOOD GARDNER: Graduate transfer quarterback Gardner Minshew had a big debut for the Cougars, throwing for 319 yards and three touchdowns with one interception. He was not sacked. "He got better as the game went on," Leach said. "Him getting in sync in the fashion he did was impressive."
NUNN BETTER: Patrick Nunn is a freshman defensive back for Washington State. His brother Leki is a freshman wide receiver for the Spartans.
THE SERIES: Washington State leads the series 7-4-1, but this is the first time the teams are meeting this century. Their last game was in 1996, when a WSU team led by quarterback Ryan Leaf posted a big win. All four San Jose State wins in the series came in the state of Washington.
___
More AP college football: https://apnews.com/tag/Collegefootball and https://twitter.com/AP_Top25