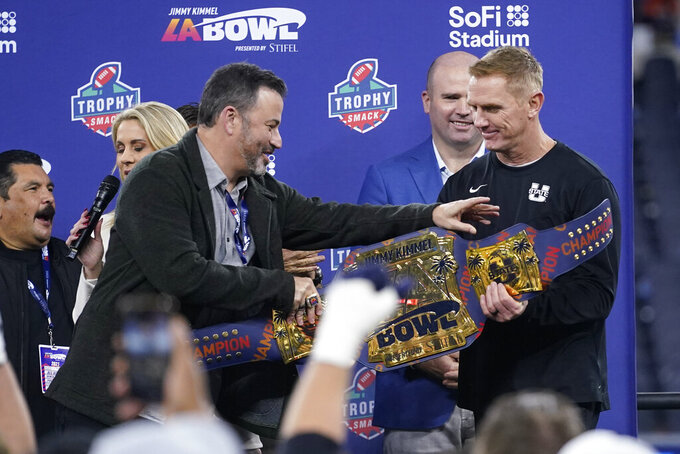 The sophomore came off the bench to throw a touchdown pass on his first collegiate attempt and helped lead the Aggies to a 24-13 victory over Oregon State.

Legas came in when starter Logan Bonner suffered a knee injury during the first quarter. Andrew Peasley was Bonner’s backup throughout the season, but was ruled out prior to kickoff due to a shoulder injury he suffered Nov. 26 against New Mexico.

Legas’ only action this season was late in the New Mexico game. Coach Blake Anderson said Legas had received very limited team snaps all season, but that he has an extremely high football IQ.

Legas showed that on his first snap when he connected with Deven Thompkins on a 62-yard touchdown strike to tie it at 7. Thompkins got a couple steps on defensive back Jaydon Grant, hauled it in at the Oregon State 25 and was gone to the end zone.

“It was a checked play by him at the line of scrimmage based off the look that he saw. That is probably the first time he’s checked, physically check to that particular play, and it came at the most critical time for us," Anderson said.

Legas also had a 5-yard scoring toss to Brandon Bowling with under four minutes remaining in the third quarter to extend the Aggies lead to 24-13. He also had a 34-yard reception on a double pass from Derek Wright.

“Nothing really changed with the system today when he went in. We stayed true to form, we stayed with the plan, and just put him in a position where hopefully guys could take the heavy lifting off of him. But he exceeded every expectation I had of what he could do,” said Anderson about Legas.

Thompkins had six receptions for 115 yards and set a single-season school record with 102 catches. The senior — who was named the Offensive MVP of the game — said he had confidence that Legas would be able to step up

“I told all the wide receivers we got to help Coop, just build that confidence, play good. And, honestly, he didn’t even need it," Thompkins said. "He was ready to go, and it showed the future he’s going to have here as a Utah State Aggie so I’m definitely proud of him.”

Calvin Tyler Jr., who was at Oregon State for four years before transferring, ran for 120 yards. He also scored what ended up being the go-ahead touchdown on a 15-yard run with 4:24 remaining in the second quarter to give Utah State (11-3) a 14-10 advantage.

Oregon State (7-6) received the opening kickoff and scored 58 seconds into the game when Jesiah Irish went 20 yards up the left sideline on a jet sweep. That would prove to be the Beavers only touchdown though as its other points came on a pair of field goals by Everett Hayes.

“We helped them out and had a lot of self-inflicted wounds,” coach Jonathan Smith said. “I thought we had enough defensively but weren’t able to do anything on offense.”

The Mountain West champion has won four of the past five bowl games when paired against the Pac-12.

The Utah State victory also gave the MWC a 6-5 advantage over the Pac-12 in games this season. It is the third time since 1999 and first since 2008 that the conference has had a winning record over the Pac-12.

The Aggies ended up having two of the wins. They opened the season with a 26-23 victory at Washington State. It is the first time Utah State has had two wins over Power Five teams in a season.

Defensive end Nick Heninger, who had three sacks and five tackles for loss to capture Defensive MVP honors, said the past two Utah State wins have meant something extra to him.

“I came from a Pac-12 team, University of Utah. And knowing that San Diego State had beat Utah and Oregon State had beat Utah, I kind of had a little extra motivation," he said. “I like to think it doesn’t matter who we play. We’re going to go out there and we’re gonna put our best on the line,”

Late-night host and comedian Jimmy Kimmel, who is one of the presenters of the game, was frequently seen on the videoboard and sidelines throughout the game. He played clarinet with the Oregon State band before the game.

Kimmel had both teams as guests for tapings of “Jimmy Kimmel Live!” leading up to the game.

Utah State: After being picked to finish fifth in the Mountain Division in the preseason, the Aggies capped a great season in Anderson's first year with the program's first conference title since 2012 and a bowl victory.

Oregon State: Despite the loss, the Beavers finish with their first winning record since 2013. They will return most of their starters, but Baylor — a first-team, All-Pac 12 selection — hasn't made a decision on if he will leave early for the NFL draft.

Utah State: Begin the 2022 season on Aug. 27 against Connecticut.

Oregon State: Kicks off next season by hosting Boise State on Sept. 3.