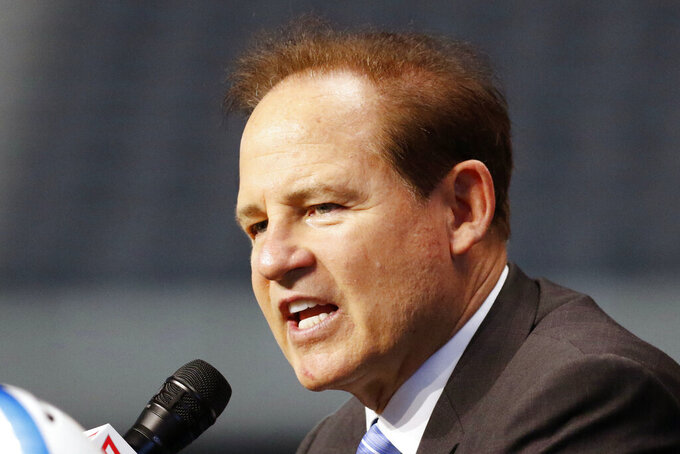 FILE - In this July 15, 2019, file photo, Kansas head coach Les Miles speaks on the first day of Big 12 Conference NCAA college football media days in Arlington, Texas. Les Koenning has to be careful every time the new offensive coordinator at Kansas walks into one of the Jayhawks’ meeting rooms, making sure to address the right person by the right name. There’s Miles Kendrick and Miles Fallin, Manny Miles and Ben Miles. Throw in new coach Les Miles and you have miles and miles of Miles in Lawrence these days. (AP Photo/David Kent, File)

LAWRENCE, Kan. (AP) — Les Miles walked around the office on the first Monday of his first game week at Kansas wearing a dapper pinstriped suit, sharp red tie and a broad grin that made him look like a kid.

"There's a point in time," Miles said happily, "where you have to get to the field."

That point comes Saturday, when Miles leads his new-look Jayhawks against Indiana State in their season opener. The coach who built Oklahoma State into a winner before leading LSU to a national title has spent the past 10 months doing legwork — he overhauled the coaching staff, brought in new players, reshaped the program inside and out — and now gets to put everything in motion.

"I've done this before. There will be some recall but I'll enjoy it," said Miles, who is 142-55 as a head coach. "It's an honor any time you take the field and represent a quality football team and a group of men that sacrificed to play some really quality football, big-time, come-after you football."

If the Jayhawks even approach quality, it would be a step in the right direction.

They haven't had a winning season since 2008, the penultimate year of Mark Mangino's tenure, and churned through four head coaches and an interim since their Insight Bowl appearance that year.

Fan apathy reached such a nadir last season, when David Beaty was leading the team to a 3-9 finish, about 10,000 fans would show up on game day. By halftime, half that was left in the stadium.

The resume that Miles brought gives him instant credibility, and the solid class that he put together in a condensed recruiting cycle helped raise expectations. And now, optimistic fans believe the Jayhawks can challenge for a middle-of-the-pack finish in the wide open Big 12.

"New team, new coaches, new energy," wide receiver Stephon Robinson Jr. said. "We don't focus on last year or anything that happened before that. This is a new year. New goals."

Part of the Miles resume includes an assistant coaching stint at Michigan, where he helped tutor a young linebacker name Curt Mallory. Fast-forward three decades and Mallory will be staring across the field as the coach of Indiana State on Saturday.

"It'll be exciting. A great opportunity to get going," said Mallory, who went winless his first year but ended last season with five straight wins to go 7-4. "We have a great challenge ahead of us."

The Jayhawks are likely to play veteran quarterback Carter Stanley and transfer Thomas MacVittie, and Miles declined to say who would start. He did say they have slightly different skillsets and the key would be utilizing them.

Standout running back Pooka Williams will serve his one-game suspension for an off-the-field incident, so the Jayhawks will lean on Dom Williams and Khalil Herbert in the backfield. Both have plenty of experience, and they are backed by talented freshman Velton Gardner.

"It'll be nice to get Pooka back," Williams said, "but it gives us a chance to show what we can do. And when Pooka gets back, it'll be even better."

Kansas should know better than to underestimate a Football Championship Subdivision foe. Nicholls State rolled into Lawrence and won the opener last season, and South Dakota State — from the same league as Indiana State — shocked the Jayhawks to open the 2015 season.

Indiana State linebacker Jonas Griffith is on the watch list for the Buck Buchanan Award, given to the best defensive player at the FCS level. Ryan Boyle is back at quarterback after he was picked the Missouri Valley Conference newcomer of the year last season. Running back Ja'Quan Keys had 13 touchdowns rushing in seven games for the Sycamores last season.

Kansas fans may be jazzed about their new coach, but Indiana State fans are just as excited about their future. The Sycamores' five Valley wins last season tied for most in school history.

"There's anticipation," Mallory said, "and an expectation to be a championship program here."