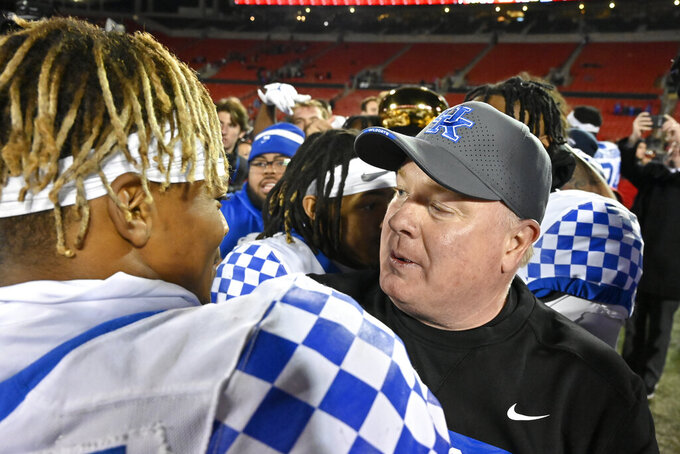 LOUISVILLE, Ky. (AP) — Given the huge holes to run through and time to throw the ball, Will Levis gladly took advantage of both strengths.

Levis rushed for career highs of four touchdowns and 113 yards, and Kentucky scored on its first four possessions to cruise past rival Louisville 52-21 on Saturday night and win the Governor’s Cup for the third consecutive time.

Big contributions by his feet and arm helped the Wildcats’ junior quarterback outgain Louisville by himself (195-144) by halftime. With huge holes on draw plays, Levis rushed for TDs of 29 and 7 yards on their first two possessions, then followed Matt Ruffolo’s 43-yard field goal with a 5-yard score with 1:53 remaining in the second quarter.

He added a 1-yard TD early in the third to put Kentucky (9-3) up 31-7 on the way to topping his previous rushing best of 108 yards against Rutgers on Nov. 30, 2019 while at Penn State. Levis also completed 14 of 18 passes for 149 yards to outshine Louisville counterpart Malik Cunningham in a matchup of mobile quarterbacks.

“We called the same play four or five times," said Levis, who matched his career high for TDs set twice this season, including last week against New Mexico State. "There were some run plays. I saw an opening, and it benefits to have a quarterback that has legs and can run."

Cunningham rushed for 2-yard TD to tie the game at 7-apiece and completed 12 of 20 passes for 145 yards before being taken to the dressing room with 10 minutes left. Evan Conley came in and threw an 8-yard TD pass and Maurice Burkley rushed for an 7-yard TD with eight seconds left for the Cardinals (6-6).

“They had the ball most of the first half and it was just one of those nights where it’s just snowballing at that point," Louisville coach Scott Satterfield said. "If you’re not doing something good on one side of the ball, you hope the other side picks you up. That didn’t happen tonight.”

Kentucky’s third consecutive victory capped its first nine-win regular season since 2018. Most important for the bowl-bound Wildcats, they claimed the Governor’s Cup for the fourth time in five meetings, including a third triumph on its rival’s home field. Kentucky has won the past three meetings by a combined margin of 153-44; the series paused last year as both teams played conference-only schedules because of the pandemic.

Despite consecutive routs of Vanderbilt and NMSU, Kentucky entered as a 2 1/2-point underdog to Louisville. That didn't sit well with Wildcats coach Mark Stoops or his team for that matter as they dominated the Cardinals a third straight time.

Kentucky took control quickly and effectively behind Levis, whose four-TD effort last week against NMSU included two turnovers. Giveaways didn't happen as he had plenty of running room and a clean pocket to pass. The Wildcats outgained the Cardinals 511-352 and shut down of an offense that had scored 93 points the past two games.

“For that offense to be effective you have to run the football,” coach Mark Stoops said. “The physical presence has to be there, and it was there tonight.”

Louisville initially looked like it might keep pace offensively with Kentucky, but its defense could neither stop nor contain Levis when he took off. That created a long day for that unit and a deep hole for the Cardinals that Cunningham’s dual skills couldn’t overcome. That leaves plenty of corrections to make before their bowl game.