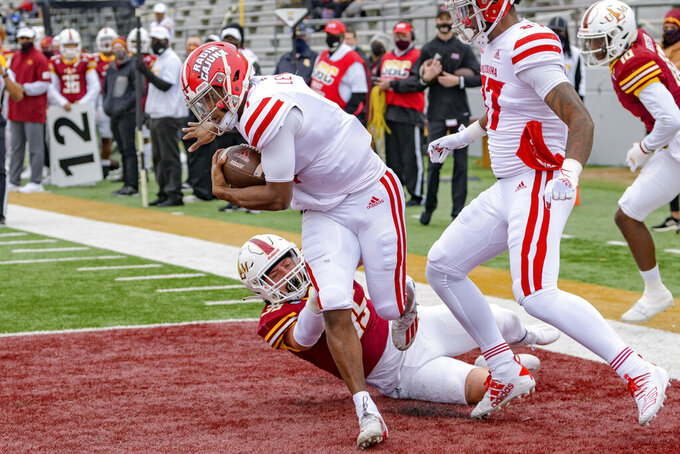 MONROE, La. (AP) — Louisiana-Lafayette coach Billy Napier didn't complain about being stuck at home recovering from COVID-19 while the No. 23 Ragin' Cajuns prepared for a rivalry game.

Rather, Napier saw it as an opportunity for key players to put their leadership on full display — and he wasn't disappointed.

Levi Lewis passed for three touchdowns and ran for two more in less than three quarters, and Louisiana-Lafayette routed winless Louisiana-Monroe 70-20 on Saturday.

“Certainly a little bit of unique week," said Napier, who was able to rejoin the team after traveling separately to Monroe on Saturday morning. “Ownership from the veteran players was huge. We had a lot of conversations with guys early in the week. They stepped up to the plate. We wanted to start fast and I thought we did that.”

Running backs Trey Regas and Elijah Mitchell each rushed for more than 90 yards and scored one touchdown apiece for Louisiana-Lafayette (8-1, 6-1 Sun Belt). Bralen Trahan returned an interception 53 yards for a score during a second quarter in which ULL scored four unanswered touchdowns.

The Ragin' Cajuns have won five straight since their lone loss to 16th-ranked and unbeaten Coastal Carolina, which is scheduled to host ULL in the Sun Belt title game on Dec. 19.

“We are playing with more balance and I think that’s who we’ve got to be if we want to continue to advance here and accomplish the things we’ve got in mind,” Napier said.

Jeremy Hunt had one touchdown passing and one rushing for Louisiana-Monroe (0-9, 0-6), which was playing for the first time in three weeks because of a COVID-19 outbreak that led to the cancellation of a game against Louisiana Tech last weekend after ULM had the previous weekend off.

“Obviously not a very good performance by our guys at all,” coach Matt Viator said. “We just didn't have our guys ready to play and that's on me.”

The Ragin' Cajuns also had an outbreak that led to the cancellation of their Nov. 14 game against Central Arkansas, with Napier among those affected.

Trahan, who now leads the team with four interceptions, said having the previous week off might have provided some beneficial late-season rest.

“If anything, it helped us," Trahan said. "We got back this week, practiced hard and it showed today.”

ULL took the lead for good on Regas' 11-yard scoring run less than four minutes in. Lewis' 11-yard touchdown run made it 14-0 before ULM responded with Hunt's 1-yard TD pass to Camero Darling.

Mitchell's 44-yard run through the middle made it 21-7 and the Warhawks responded once more, briefly pulling within a touchdown again on Hunt's 7-yard run.

ULL then scored 35 straight points, starting with Lewis' 1-yard pass to Neal Johnson. The Cajuns' fourth TD of the second quarter came when Lewis hit Kyren Lacy from 22 yards out with 17 seconds left in the half.

Lewis led one more touchdown drive in the third quarter before he and several other starters were substituted out for good.

Lewis finished 18-of-25 passing for 147 yards without an interception. He also rushed for 55 yards.

He noted that studying ULM's defense helped him recognize when it made sense to run.

“I kind of took initiative for that,” Lewis said. “I knew I was going to be able to run the ball.”

The Cajuns have forced at least two turnovers in five straight games.

Trey Amos made ULL's 13th interception this season when he snagged ULM backup Garret Kahmann's deep pass and returned it 51 yards to the ULM 16.

Louisiana-Lafayette: The Ragin' Cajuns not only overcame Napier's absence from practice but also weren't distracted by reports of South Carolina's interest in their coach for the Gamecocks' vacancy. They were favored by four TDs and led by more than that after racing to a 49-14 first-half lead. The Cajuns also clinched a third straight season of going unbeaten against Sun Belt West teams.

Louisiana-Monroe: The Warhawks gave the Cajuns tough games each of the previous two seasons, but this year’s contest was as much a mismatch on the field as on paper. Roster upheaval caused by COVID-19 and injuries haven't helped.

Louisiana-Lafayette: Concludes its regular season at Appalachian State on Friday.

Louisiana-Monroe: Visits Arkansas State on Saturday for the first of two scheduled road games to finish the season.