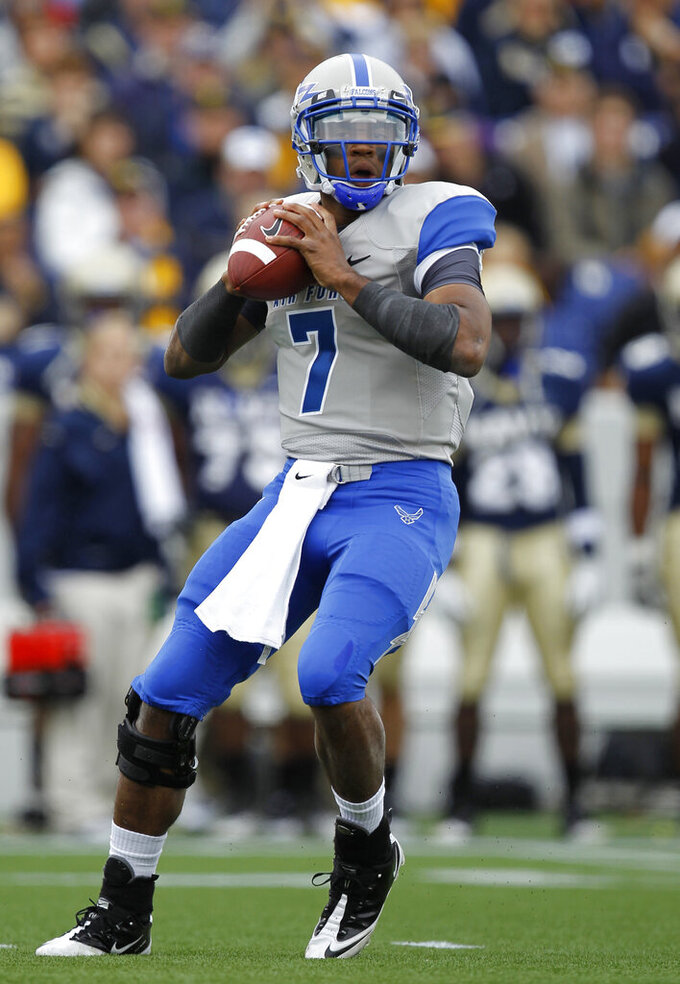 FILE In this Oct. 1, 2011, file photo, Air Force quarterback Tim Jefferson Jr. drops back to pass during the first quarter of an NCAA college football game against Navy in Annapolis, Md. The attacks on Sept. 11, 2001 played a role in Jefferson's decision to join the Air Force. (AP Photo/Luis M. Alvarez, File)

On a clear day, the New York skyline is visible from the top of Army’s Michie Stadium at West Point.

So after the second plane hit the World Trade Center, former Black Knights coach Todd Berry ran to the top. Some of his staff members, too.

To watch in horror. In fear. In disbelief.

The awful impact of the 2001 terrorist attacks can be gauged in countless ways. Some measure it in what was lost that day and in the days that followed. Others look to America's resolve and response.

For Berry and others in charge of the hundreds of young athletes at the nation's three service academies that day, the memories that have stuck are tinged with sadness, anger and, above all, immense pride in watching their players realize that their mission to protect their country had suddenly been put front and center. And they were ready for it.

“There was a little bit of a comfort level in knowing,” Berry said, “that’s the group that’s going to respond to this crisis.”

There will be football games played around the country on Saturday, the 20th anniversary of the attacks, and those games include Air Force at Navy and Army hosting Western Kentucky. There will be powerful tributes and memorials to remember those lost at the World Trade Center, the Pentagon and in a field in rural Pennsylvania, along with first responders who rushed to help.

The truth is, what happened that day is never far from anyone's mind at the academies.

The significance didn't really fully hit senior linebacker Demonte Meeks until he arrived at Air Force. Only through time has he understood the magnitude.

“Once you realize the amount of pain that went into this event and the amount of people that are still going through it, that’s when you start to realize it,” Meeks said. “For me, it really hit home when everyone started graduating and commissioning and it’s like, ‘Dang, these people have a job and actually have a role to fill.’ That’s where I’m sitting at right now.”

For Berry, this will always remain rooted in his heart: That midnight vigil at Army after the attacks — cadets heard but not seen in the dark until a spotlight shined on them. There were bagpipes and the drum corps playing “Amazing Grace,” with an American flag punctuating the moment.

“At the end of the vigil,” Berry recalled, halting as he fought back tears, “the Corps of Cadets just broke out into the alma mater spontaneously. It just was such a moving moment because you recognized for that group that their whole life just changed at that moment."

Navy senior linebacker John Kelly III was born and raised on Staten Island, New York. His father was — and remains — a firefighter for Engine 201 in Brooklyn. His dad was at a golf outing as part of a fundraiser for firefighters in need on the day of the attacks.

“Once everything happened, he came right home, kissed me and my mom and my other brother Patrick goodbye,” Kelly said. “Took his stuff, went in, and my mom had to say her prayers.”

Kelly’s father headed to ground zero to help. He survived that day, but four members of his firehouse didn’t.

“What saved him I can say was the fact that he was at this golf outing,” Kelly said. “There’s so many stories like that: ‘What if I was on duty?’ He’ll say that himself.”

Kelly, who was 20 months old at the time, grew up with constant reminders of 9/11. Jake Siller was Kelly’s best friend growing up, and his father Stephen was a firefighter who died that day. So was the father of Kelly’s girlfriend.

The tragedy played a big role in leading Kelly to Navy, one of the untold numbers of service academy enlistees who — as Army coach Jeff Monken puts it — "will run toward trouble and when they know others are in danger they’ll be there to serve.”

“I would say that is my why, for coming and serving, period, besides the football aspect and coming here and playing,” said Kelly, whose father will attend Saturday's game. “It took on a whole new meaning of what happened and who was affected, and all the people I knew, families, my best friend ... who lost their fathers and husbands.”

Navy punter Kellen Grave de Peralta was born on July 25, 2001. His mother, Tiffany, who worked at the Pentagon as a human resources officer, happened to be on maternity leave with him and not in the building on Sept. 11. His father, Ricardo, is a former Navy SEAL who was in Virginia training with an FBI SWAT team that day.

“Once he received word of the attacks, they immediately raced back to D.C., and he actually ended up passing the Pentagon that was on fire at the time,” Grave de Peralta said. “Two weeks later, he was assigned to the 9/11 investigation and spent the next two-plus years helping put four al-Qaida terrorists, who were part of the 9/11 plot, in Guantanamo Bay.”

In seventh grade, he was picked up by his mom soon after a camping trip in Georgia when she burst into tears. That wasn't like her. He was stunned. When they got home, she told him to go outside and play basketball.

Only later did he realize why. They had relatives in New York City and she was frantically trying to reach them. They were safe.

The moment crystalized one thing: He wanted to defend this country for his mom. For his family. For everyone.

The versatile QB who etched his name into Air Force's record books over his playing career (2008-11) became a fighter pilot — call sign “Blitz.” He's been deployed to Afghanistan. He now trains the next generation of fighter pilots at Sheppard Air Force Base in Texas.

Jefferson's been back to Falcon Stadium — above it, even, in his plane as part of a flyover for an Air Force/Navy game in 2018. It’s never lost on him the role the academies play, which was why he signed up.

“I get to be in the military,” Jefferson said. “And I get to help defend the country against future attacks such as the ones that we had on September 11.”

Berry coached Army from 2000-03 and now serves as the executive director of the American Football Coaches Association. His youngest daughter was born right after Army beat Navy in the season finale that December. She’s about to turn 20.

“She obviously knows about it but didn’t feel those emotional experiences," Berry said. "I think it’s important for her generation and for her as an individual to understand what happened and why, what some of the outcomes were from that, and to get my perspective on it at least and not just a textbook.

“While I recognize the time has passed, like many events that are very emotional days, they say you don’t remember days, you remember moments,” he added. "I remember it like it was yesterday.”