Linderbaum is centerpiece for Iowa team on 6-game win streak 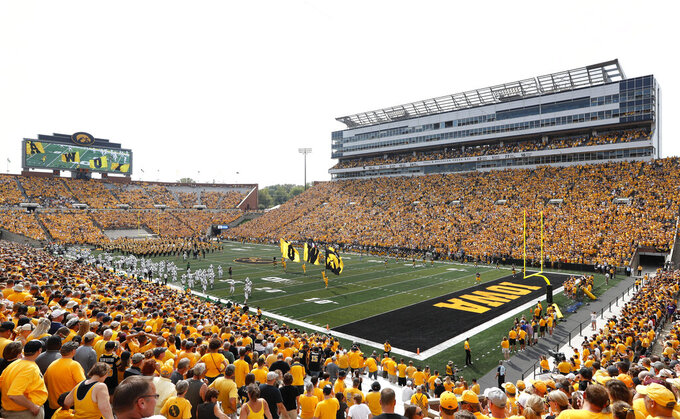 FILE - Fans cheer before an NCAA college football game between Iowa and North Texas at Kinnick Stadium in Iowa City, Iowa, in this Saturday, Sept. 16, 2017, file photo. The field at Iowa's Kinnick Stadium will be named for Duke Slater, the trailblazing Black player who was an All-American tackle a century ago, played in the NFL and became a pioneering Chicago judge. The university's Board of Regents approved the naming of the field during its meeting in Cedar Falls on Wednesday, July 28, 2021. (AP Photo/Charlie Neibergall, File)

IOWA CITY, Iowa (AP) — The move from defensive line to center pushed Iowa's Tyler Linderbaum out of his comfort zone.

You wouldn't know it now.

Linderbaum has started all 21 games at center the last two seasons and is considered the top player on a Hawkeyes team that will begin the season on a six-game win streak.

The 6-foot-3, 290-pounder from Solon, Iowa, was voted to the 2020 Associated Press All-America second team and was a finalist for the Rimington Trophy.

Linderbaum quickly adapted to playing center in a program that traditionally produces some of the college game's strongest offensive lines. He said Iowa's emphasis on fundamentals and drill work pushed him along.

“I played center in high school,” he said, "but the speed of the defensive linemen, and the freakish athletes you go against, is something you need to get used to. You need the repetitions.”

Jack Plumb, who started two games at right tackle last season, has moved to left tackle and Cody Ince is back at left guard after starting six games at that spot.

The succession plan for Banwart became complicated when Kyler Schott broke his foot while baling hay on his family’s farm. Schott will be out indefinitely, leaving Justin Britt to take over at right guard. Nick DeJong is No. 1 at right tackle.

“I couldn’t tell you who’s going to be starting when we get the season going here,” coach Kirk Ferentz said. “I expect Linderbaum to be in there playing, but after that it’s wide open.”

ON THE DEFENSIVE SIDE

The Hawkeyes' defensive line lost AP Big Ten defensive player of the year Daviyon Nixon, another all-conference pick in Chauncey Golston and Jack Heflin. Zach VanValkenburg is the only returning starter. John Waggoner is set to start at left end, Noah Shannon at left tackle and Yahya Black at right tackle. Shannon is the only one who has started a game.

Tyler Goodson is the Big Ten's No. 2 returning rusher after running for 762 yards, including four games with at least 100.

“He’s got good energy, good effort,” Ferentz said. “Just everything he does is quality.”

HIS TIME HAS COME

Caleb Shudak waited until his sixth year to be the No. 1 kicker. He handled kickoffs the last two seasons and replaces All-American Keith Duncan on extra points and field goals.

“I know Caleb wasn’t our starter, but we feel like he was,” Ferentz said. “It literally was almost flipping a coin between him and Keith Duncan. They were on each other’s tails. They were really close.”

Shudak enters this season with one career field-goal attempt, a 52-yarder that clanked off the right upright and was no good at the end of the first half of last season's 21-20 loss to Northwestern.

Shudak had entered his name in the NCAA transfer portal after the 2019 season but decided to stay.

“I definitely thought about just hanging up the cleats, go out, find a job, start my career,” the civil and environmental engineering major said. “But I kept seeing improvement. My best friends are here. I just wasn’t ready to give it up.”

Ferentz said he and his staff continue to urge players to get the COVID-19 vaccination. He said the number of vaccinated players was in the mid 70s in late July and that the total has gone up since, but he didn't say by how much.

“When September rolls around, we expect to be in a pretty good position,” he said. “But that remains our players’ choice what they choose to do. We’re not going to mandate, but we are going to continue to educate.”

Iowa opens Sept. 4 with a Big Ten game against Indiana in Iowa City. The Cy-Hawk Game is the following week at Iowa State.

“The margin for error is always tight, and we traditionally have not always been sharp early, or at least where we need to be," said Ferentz, whose team opened 0-2 in 2020. "Last year is a good example of that. It’s a good reminder for all of us that we don’t have time to waste.”