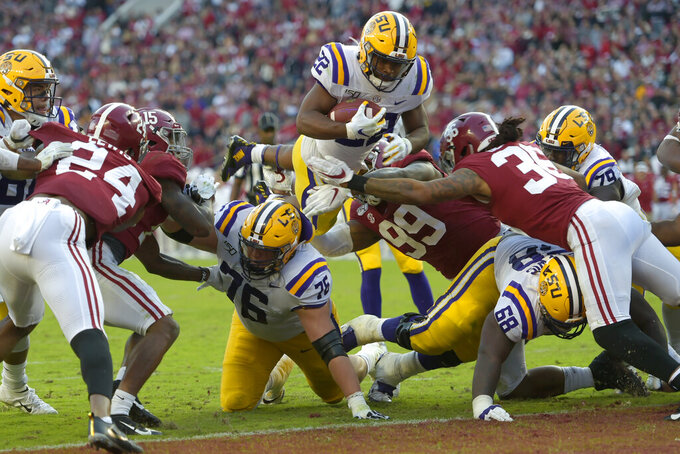 LSU running back Clyde Edwards-Helaire (22) dives over Alabama's Raekwon Davis (99) and Markail Benton (36) to score a touchdown in the first half of an NCAA college football game, Saturday, Nov. 9, 2019, in Tuscaloosa, Ala. (AP Photo/Vasha Hunt)

TUSCALOOSA, Ala. (AP) — Clyde Edwards-Helaire had seemingly sealed one of the most satisfying victories in the history of LSU football with a tackle-breaking touchdown run late in the fourth quarter. Back on the sideline as delirious Tigers fans began to celebrate in Bryant-Denny Stadium, Edwards-Helaire could hardly control his emotions.

The junior running back who grew up 20 minutes from Tiger Stadium in Baton Rouge, Louisiana, was practically sobbing as he hugged an assistant coach.

His work was not yet done, though. Just like that, Alabama scored again. LSU needed another first down to finally put an end to an eight-game losing streak against its SEC West rival. The Tigers gave the ball to Edwards-Helaire and the 5-foot-8, 209-pounder powered for 12 yards.

"It was just an overwhelming feeling," Edwards-Helaire said.

Justifiably, quarterback Joe Burrow was hailed as the hero of LSU's 46-41 victory against Alabama on Saturday, but the contributions of the Tigers' diminutive workhorse could not be understated. Edwards-Helaire carried 20 times for 103 yards and three touchdowns, and he led the team with nine catches for 77 yards and another score. Time and again, the former three-star recruit made plays that stemmed the Tide's attempt at a comeback.

"He creates such a matchup disadvantage for the defense," Burrow said. "He runs great routes. Then you also have to stop him on the downhill runs. He's going to play for a long time."

LSU has built its offense around powerful tailbacks in recent years, from Jeremy Hill to Leonard Fournette to Derrius Guice. Edwards-Helaire, who followed Guice at Cathlolic High School in Baton Rouge, has a different skill set — one that fits perfectly into LSU's new offense.

"I came into this year, kinda the starter," Edwards-Helaire said. "Solidified myself, being able to play in these games. Week in and week out, always being doubted. Come in, probably be doubted again next week. But that's something that motivates me."

Running a spread similar to the one first-year passing game coordinator Joe Brady brought with him from the New Orleans Saints, LSU wants to create space for Edwards-Helaire as a runner and receiver. If Burrow plays the part of Drew Brees, Edwards-Helaire is LSU's Darren Sproles, the consummate versatile and undersized tailback who has spent 14 years frustrating NFL tacklers.

Against Alabama, Edwards-Helaire did his best Sproles impression. On a fourth-and-goal from the 1 with 26 seconds left in the first half, Edwards-Helaire leaped over the line for his first touchdown. Moments later, he slipped out of the backfield for a 13-yard touchdown reception.

Early in the fourth quarter, after Alabama had trimmed a 20-point deficit down to 6, Edwards-Helaire took a pass from Burrow in the flat and busted through Alabama defenders for a crucial third-and-10 conversion.

"Kind of a low ball. Joe had to get rid of it quick. He had some pressure in his face. Reached down, caught the ball," Edwards-Helaire explained. "Probably ran like 6 yards without any contact. I know for a fact that a lot of guys key in on the fact that I might make a move on them so I gave him a little hesitation move to get his feet planted and then get the first down. Tried to run through his chest to keep this drive alive."

Four players later, Edwards-Helaire spun off a tackler in the backfield and strolled into the end zone for a 5-yard score.

"Nothing's too hard for Clyde," LSU coach Ed Orgeron said. "He is an outstanding back. Outstanding man from Louisiana."

LSU had quite a party on Tide turf Saturday night. The Tigers got to sing their fight song. There were hugs and dancing and tears. LSU assistant Dennis Johnson was bouncing around, yelling to anyone who would listen, "It's a new day in the West!"

This was only Edwards-Helaire's third game against Alabama, but few LSU players understand better the frustration of years of being dominated by Alabama.