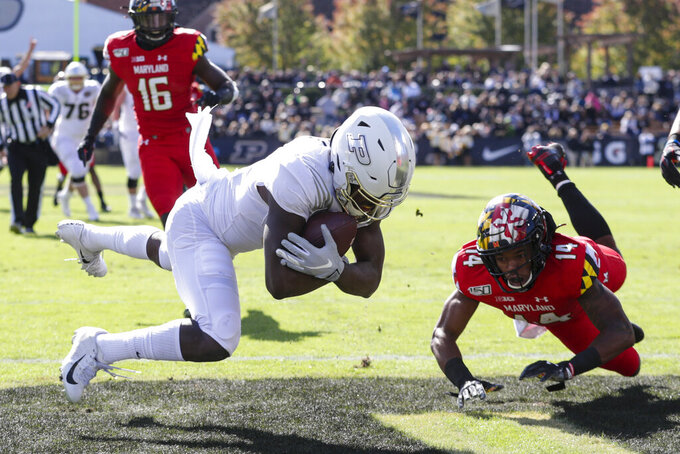 Purdue wide receiver David Bell (3) makes a catch for a touchdown over Maryland defensive back Deon Jones (14) during the first half of an NCAA college football game in West Lafayette, Ind., Saturday, Oct. 12, 2019. (AP Photo/Michael Conroy)

COLLEGE PARK, Md. (AP) — The erratic play of Maryland's defense has proven to be more of a problem for first-year coach Mike Locksley than losing his starting quarterback to injury.

Tyrrell Pigrome ran for a 61-yard score and threw for 218 yards at Purdue last Saturday as the replacement for Josh Jackson , who was out with high ankle sprain. Unfortunately, the Boilermakers amassed 547 yards and walloped the Terrapins 40-14 .

"We didn't play great team defense," Locksley acknowledged Tuesday. "We missed a lot of tackles and we didn't play with the energy our defense has displayed throughout the course of the season."

The Terrapins (3-3, 1-2 Big Ten) opened with a shutout of Howard and entered the Purdue game coming off a 48-7 rout of Rutgers. But Maryland also gave up 59 points to Penn State and stumbled mightily against Purdue, which moved the chains on 11 of 18 third-down attempts — including conversions of 11, 13 and 23 yards that left Locksley shaking his head.

He can only hope that Maryland's defense — currently ranked 11th in the 14-team conference — can get it right Saturday against Indiana (4-2, 1-2). The Hoosiers are averaging 33.3 points per game and rank second in the Big Ten in yards passing behind Purdue.

The Terrapins will be without senior defensive back Tino Ellis, who is out for the year with an upper body injury after starting the first six games. Ellis started all 12 games last season and was honorable mention Big Ten.

Even before Ellis was removed from the mix, Maryland was relying heavily two true freshmen, defensive backs Deonte Banks and Lavonte Gater.

"We were getting beat with slants, which are fundamental issues that we'll get cleaned up and get fixed," Locksley said. "The more experience those guys get, the better we'll be."

Locksley has no intention of re-writing the game plan to accommodate an ever-changing starting lineup.

"We're going to continue to attack. We've got to be aggressive up front," he said. "We're not a big interior defensive line group, so to sit back and play zone defense (won't work). The quickest way to get beat is to allow people to run the ball."

Perhaps the best player on Maryland's defense is safety Antoine Brooks Jr., who leads the Big Ten with 5.8 solo tackles per game and ranks second on the Terps with 38 tackles overall.

Brooks usually roams the field while focusing on taking out the ball carrier, but opposing teams have been making it harder for him to be a factor.

"One of the things people have done to us to negate Antoine Brooks is they've spread us out, so he's not close to the box where he has been able to create a lot of issues for people on offense," Locksley said. "We're making some adjustments there to keep him in the game."