Long's streak on line when Lobos face No. 25 SDSU 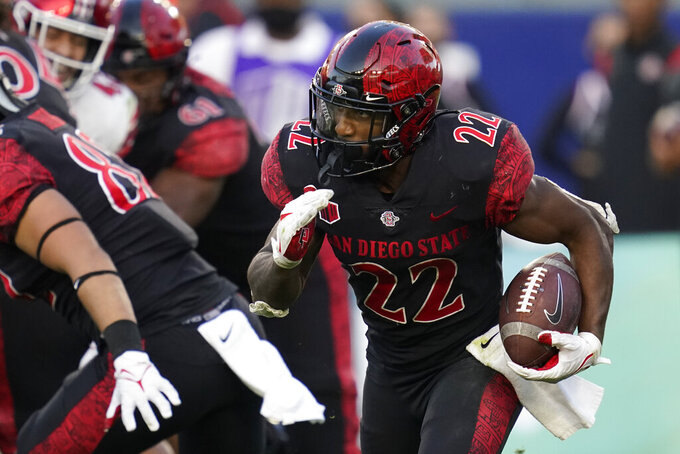 San Diego State running back Greg Bell (22) runs the ball during the second half of an NCAA college football game against Utah Saturday, Sept. 18, 2021, in Carson, Calif. (AP Photo/Ashley Landis)

SAN DIEGO (AP) — If Rocky Long’s mojo is still intact in the New Mexico-San Diego State series, then the underdog Lobos stand a chance of upsetting the No. 25 Aztecs.

Less than a month after he retired as SDSU’s head coach following the 2019 season, Long returned to his alma mater as defensive coordinator under new Lobos coach Danny Gonzales.

The Aztecs (4-0) and Lobos (2-3, 0-1 Mountain West) will meet for the first time since then on Saturday night in Carson, the Los Angeles suburb where the Aztecs are playing until their new stadium in San Diego is ready. It will be the conference opener for SDSU, which was picked to finish third in the MWC West Division in a preseason poll. The Aztecs are 19 1/2-point favorites against the Lobos, according to FanDuel Sportsbook.

“Coach Long has been on the right side of that game for years,” said Gonzales, who played for Long for one season at New Mexico, coached under him at both New Mexico and San Diego State, and now is his boss. “I’ll blame him if we lose. It’s his fault that we couldn’t keep it going. And he can blame me because I’m the one in charge, not him. It will be fun.”

Hoke, in his second stint as SDSU’s coach, said Saturday’s game will be a tough one.

“I don’t like playing against friends. I never have,” Hoke said. “It’s not fun and it’s not fun for wives, especially on how friendly you are with that person. But Dan’s doing a heck of a job and they’ve got a very good football team. You can see the recruiting effects they’ve had on the younger players and how they’ve played. It’s going to be a heck of a football game. They’ll be very stingy defensively and it will be a game of toughness I would think.”

Long hired Hoke as defensive line coach for the 2019 season. When Long “retired” from SDSU on Jan. 8, 2020, Hoke was immediately promoted to head coach.

Gonzales thinks SDSU is the best team in the MWC. “I told our team in the locker room on Saturday, the team you’re getting ready to play next week, a guy in this locker room, coach Long, started that process with coach Hoke way back in 2009,” Gonzales said. “Coach Hoke left after 2009 and coach Long really got them going.”

Gonzales said the Lobos need to be business-like. “Is there incentive to beat them even more because coach Hoke and I are friends and coach Long and I were there? For sure. That’s human emotion. But you can also screw it up with human emotion by trying to do what we did last week and that’s trying to be so perfect and do so many things that you don’t give your kids a chance. That won’t be the case this week.”

The Lobos were run over by Air Force last week, allowing 408 yards rushing and five touchdowns in a 38-10 loss.

SDSU senior running back Greg Bell is expected back from an undisclosed injury to his left shoulder area suffered early in a victory against Towson two weeks ago. Bell opened the season with three straight 100-yard games. He’ll be going against Long’s 3-3-5 defense.

TWO WHO GOT AWAY

“I’m glad they’re here in San Diego instead of being in Albuquerque because both of them have contributed to this program,” said Hoke, who called Byrd one of the fastest players in the conference.