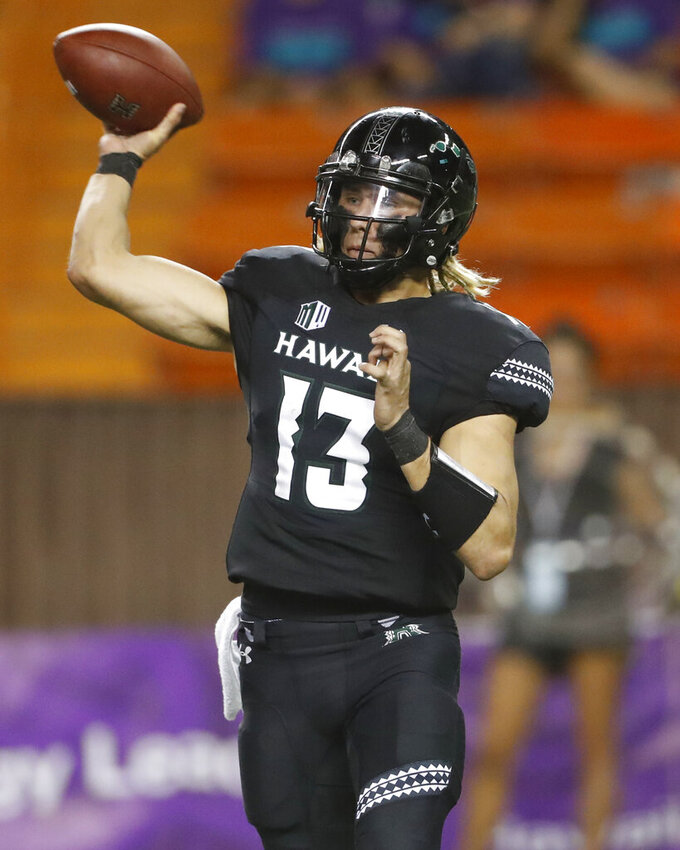 FILE - In this Oct. 20, 2018, file photo, Hawaii quarterback Cole McDonald (13) makes a pass against Nevada during the fourth quarter at an NCAA college football game, in Honolulu. The Warriors are seeking their seventh bowl victory in 12 appearances, including their eighth trip to the Hawaii Bowl. Hawaii takes on Louisiana Tech in Hawaii on Saturday.(AP Photo/Marco Garcia, File) 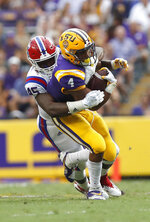 The Warriors are seeking their seventh bowl victory in 12 appearances, including their eighth trip to the Hawaii Bowl. The Bulldogs are in a bowl game for the 11th time overall and looking for a fifth consecutive season with a bowl win.

Hawaii QB Cole McDonald vs. Louisiana Tech secondary. McDonald has thrown for 300 or more yards seven times this season and eclipsed the 400-yard mark in three games. His 3,790 passing yards rank fifth nationally and his 35 passing touchdowns, seventh. He will be tested by a Bulldogs pass defense that allows just 193.6 yards per game, good for 28th in the country.

Louisiana Tech: DE Jaylon Ferguson is 1.5 sacks away from tying the all-time NCAA career record held by Terrell Suggs. Ferguson leads the nation in sacks (15.0) and is second in tackles for loss (23.5). His 42.5 sacks make him the nation's active career leader.

Hawaii is playing in the Hawaii Bowl for the second time in three seasons. . The Rainbow Warriors last bowl appearance was a 52-35 win over Middle Tennessee in the 2016 Hawaii Bowl. They lost their last three bowl games prior to that. . Hawaii is 6-5 all-time in bowl games and 4-3 in the Hawaii Bowl. . Rainbow Warriors have scored at least 50 points in three of their four Hawaii Bowl victories. . Louisiana Tech is playing in its fifth consecutive bowl game, a first in program history. It is one of only four teams nationwide to win four straight bowl games (Georgia, Utah and Wisconsin). . Four of Louisiana Tech's seven wins came in one-possession games. It is 4-1 on the season in games decided by eight points or less. . Hawaii and Louisiana Tech met every season from 2003-11, when they were members of the Western Athletic Conference. The last time they faced off was in Ruston, Louisiana, in 2011. Hawaii won 44-26. . Bulldogs sixth-year coach Skip Holtz is 1-0 in the Hawaii Bowl. He coached East Carolina to a 41-38 win over Boise State in the 2007 Hawaii Bowl. . Louisiana Tech defensive back Daniel Lewis played for Hawaii from 2014-17 before joining the Bulldogs as a graduate transfer this season.