Louisville airs it out in 34-20 win over NC State 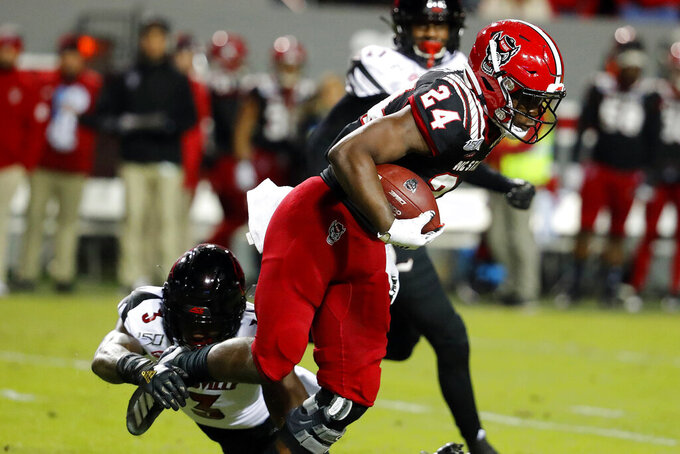 North Carolina State's Zonovan Knight (24) tries to break the tackle of Louisville's Russ Yeast (3) during the first half of an NCAA college football game in Raleigh, N.C., Saturday, Nov. 16, 2019. (AP Photo/Karl B DeBlaker)

With the Wolfpack missing its top five cornerbacks because of injury, Cunningham completed deep scoring passes of 43 yards to Dez Fitzpatrick, 74 yards to Tutu Atwell and 42 yards to Marshon Ford before adding a 1-yard touchdown throw to Evan Pfiefer. Placekicker Ryan Chalifoux added a fifth pass for a score with a 7-yard completion to Ford on a fake field goal as Louisville improved to 6-4 overall, 4-3 in the ACC.

“That’s kind of been our game plan all year,” said Louisville coach Scott Satterfield. “We want to run the football, and if guys are playing us one-on-one on the outside, we’ve got to take our shots. We connected on a lot of those shots.”

N.C. State (4-6, 1-5), which has five starters overall out for the season due to injury, led 10-7 at halftime after a 15-yard, second-quarter scoring pass from Devin Leary to Emeka Emezie, but gave up two touchdowns in the first 2:30 of the third quarter to fall behind by a double-digit margin.

Louisville has a reputation for big gains in the passing game as Cunningham and speedy wideouts Atwell and Fitzpatrick have stretched defenses vertically all season. The Cardinals’ 17.0 yards per completion entering Saturday’s game ranked fifth in the nation, and Louisville had 13 completions of at least 40 yards in its first nine games.

That deep-passing ability made the Cardinals an extremely challenging matchup for the banged-up N.C. State defensive backfield. Fitzpatrick got wide open behind the defense for the first touchdown of the game, and the speedy Atwell got matched up with a linebacker for the go-ahead score on the opening possession of the third quarter.

“In the first half, I missed a couple throws, a couple guys over the middle,” Cunningham said. “That’s what we went into halftime and corrected, those mistakes. And we executed well in the second half.”

Cunningham was 13-for-20 passing for 242 yards, but Chalifoux provided the most memorable play of the night on a fake field goal play the Cardinals have been practicing all season. Chalifoux rolled right and saw nothing but N.C. State players in front of him at first. But he patiently held the ball until Ford got free of the defense to allow the kicker to deliver the pass.

Shortly afterward, the team marked its return to the postseason with a raucous celebration in the locker room.

“That was something you’re going to remember the rest of your life,” Chalifoux said. “Being able to be those guys celebrating a win, celebrating Louisville coming through, bouncing back this year, being able to become bowl-eligible. … Being a part of something special, that’s a once-in-a-lifetime thing.”

N.C. State succeeded in its plan to slow down a Louisville rushing attack that was averaging 218.1 yards per game. The Cardinals ran for just 77 yards but took advantage of opportunities against a depleted secondary as the Wolfpack crowded the line of scrimmage.

“We can’t give up the big, explosive plays, and we’ve got to make plays on the football that are there to be made,” said N.C. State coach Dave Doeren. “Even the fake field goal, we had a guy right there and it went right through his hands into their guy’s hands. That’s what happened.”

Louisville: The Cardinals won after trailing at halftime for just the second time this season; they had been 1-4 when behind at the intermission. Becoming bowl eligible with two games to go is a good indicator of progress under first-year coach Satterfield after a 2-10 effort in 2018.

N.C. State continued its recent trend of turnover-prone efforts after a stellar start to the season with respect to ball security. The Wolfpack lost two fumbles and threw an interception on a shovel pass, and now have suffered 10 turnovers in their past three games after committing just six turnovers in their first seven games.

With 67 yards on 16 carries, Louisville redshirt freshman running back Javian Hawkins finished the game with 1,045 rushing yards for the season. He is 2 yards short of the Cardinals’ freshman season rushing record set by Victor Anderson in 2008.

Louisville: Plays its only November home game on Saturday against Syracuse.

N.C. State: Meets Georgia Tech on Thursday night in its final road game of the season.