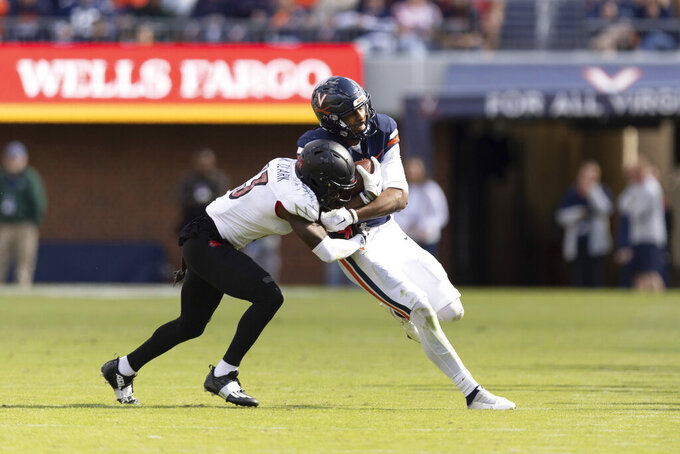 CHARLOTTESVILLE, Va. (AP) — Brock Doman proved an able replacement for injured Malik Cunningham, throwing for one touchdown, running for another and leading Louisville to a 34-17 victory at Virginia on Saturday.

Domann overcame a slow start — his first completion was to former teammate Anthony Johnson, now a Virginia defensive back — and evoked thoughts of Cunningham when he took off on a 44-yard run for a tying touchdown.

“That even tricked me,” Louisville strong safety M.J. Griffin, who also started, said. “I didn't even think he had the ball honestly.”

Domann found out he was starting on Sunday, but even with a week to prepare, said it took him awhile to get settled.

“I was in my own way in the first quarter," he said after finishing 17 for 30 for 275 yards with two interceptions. "As much as you want to prepare for your first start, you need to get out of your own way. Once I did that, this team was amazing.”

The Cardinals (3-3, 1-3 Atlantic Coast Conference) were without Cunningham, who had started a school-record 40 consecutive games, as he remained sidelined by a concussion sustained last week against Boston College.

Brennan Armstrong threw for a touchdown and ran for one for the Cavaliers (2-4, 0-3), but also helped kill Virginia's first quarter momentum when he fumbled the ball away and threw a pair of interceptions.

Virginia coach Tony Elliott said Armstrong is trying to do much at times and needs others to come along, but Armstrong said that wasn't the problem.

“I don’t really feel like I’m trying to play outside the offense, but I mean I’m just making mistakes also with trying to play and make plays,” he said.

Virginia led 10-0 and had the crowd roaring when the fumble was lost.

“That was really huge right there because if they were to score, it would have been 17-0,” Griffin said. He also had one of the Cardinals' two interceptions.

Trevion Cooley and Jahwar Jordan ran for touchdowns for Louisville, with Jordan's making it 34-17 with 11:03 left and sending fans streaming out.

Those who stayed saw Mike Hollins stopped on a fourth-and-1 try from the Cardinals' 5 with just over 8 minutes left on a call that was initially ruled a first down, but overturned on review, all but sealing Virginia's loss.

The road victory surely helped Cardinals coach Scott Satterfield, rumored to be on the hot seat. The victory also ended a remarkable nine-game losing streak for Louisville in games they led or at least tied in the fourth quarter.

“I don't know about me. I do know they showed up and supported Brock,” Satterfield said, praising how the offense and defense both got better.

Louisville: With two weeks to get Cunningham back, the Cardinals at least don't have to worry about Domann. He overcame his slow start, completed many clutch passes and may have surprised himself with the long TD run.

Virginia: The Cavaliers continually made things hard of themselves in key spots. Armstrong's fumble at the Louisville 18 came with them ahead 10-0 and driving for a third consecutive score. Sure-handed Keytaon Thompson had two drops in three plays to kill their ensuing drive, and with the Cardinals going backwards on penalties, Anthony Johnson's pass interference call in the end zone gave them a first-and-goal at the 2. Cooley ran it in from there.

The Cardinals have a week off, then are at home against Pittsburgh.

Virginia has a week off, then plays at Georgia Tech on a Thursday night.