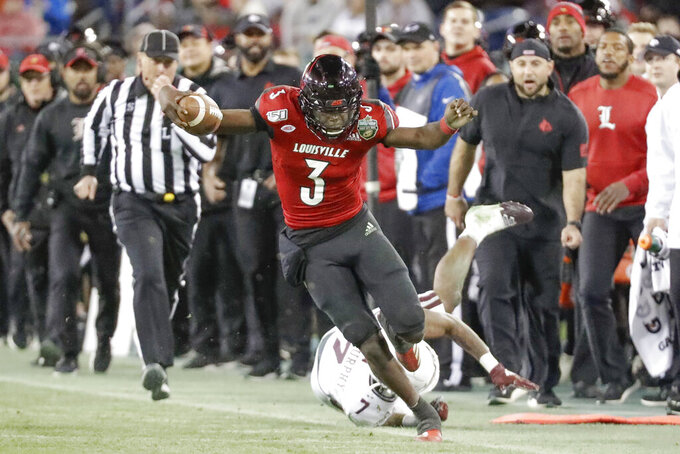 Louisville quarterback Micale Cunningham (3) tries to stay in bounds as he carries the ball against Mississippi State in the second half of the Music City Bowl NCAA college football game Monday, Dec. 30, 2019, in Nashville, Tenn. (AP Photo/Mark Humphrey) 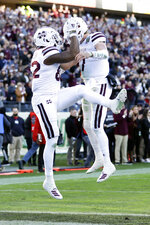 Micale Cunningham threw for 279 yards and two touchdowns and ran for 81 more, and Louisville beat Mississippi State 38-28 Monday in the Music City Bowl.

“The guys that stuck it out with us is so rewarding to them to be able to come in here and finish it off with a big-time bowl win,” Satterfield said. “I'm so proud of these guys, particularly the seniors. But I'm excited for the young guys who'll be coming back so we can build off this. ... The momentum is going to be huge for us.”

“This season was a book in and of itself,” Moorhead said of a season marred by suspensions. “Certainly 6-7 was not the outcome we desired. To get bowl eligible, win an Egg Bowl and have this opportunity to play in a bowl game to me is a credit to these seniors, a credit to this staff and credit to these leaders that we were able to battle through a ton of adversity this season.”

“It popped right in my hands, a perfect bounce,” Pass said.

Louisville was poised to take control on its opening drive, going from the Cardinals 3 down the field. Cunningham hit Dez Fitzpatrick on a 19-yard pass only to be stripped of the ball by linebacker Willie Gay Jr., with linebacker Tim Washington recovering for the Bulldogs just short of the end zone.

Louisville finally got on the board with a bit of trickery. Micale Cunningham lateraled left to wide receiver Tutu Atwell, who threw back across the field to a wide-open Marshon Ford, who then ran in for a 33-yard TD midway through the second. Ryan Chalifoux added a 31-yard field goal as the first half expired to pull Louisville within 14-10.

Cunningham put Louisville ahead to stay with a 24-yard TD pass to Devante Peete with 5:01 left in the third. Pass scored when he recovered the ball after Gary McCrae chopped it out of Stevens' arms. Cunningham added an 8-yard TD pass to Ford early in the fourth for a 31-14 lead.

“We got down 14 points early in the game, and the kids didn't flinch,” Satterfield said. “I mean they kept playing, they kept battling. The next thing you know you're right back in the game. We grabbed the momentum and poured it on.”

Mississippi State: Junior running back Kylin Hill, the Southeastern Conference's leading rusher with 1,347 yards, stuck around for this bowl despite his plans to enter the NFL draft. Hill came in needing 45 yards to break the Bulldogs' single-season rushing record held by Anthony Dixon, but he finished with 3 yards on seven carries after apparently hurting an ankle early.

“He tried to fight through it,” Moorhead said of Hill's injury. “That's credit to him and his toughness and what he thinks of his teammates.”

Louisville: The Cardinals lost starting middle linebacker Dorian Etheridge early in the second quarter. The linebacker's left leg was under Bulldogs tight end Geor'quarius Spivey, and Etheridge tried to jerk his leg free and then kicked at Spivey trying to get free. It didn't matter, not with an offense filled with so many playmakers. Atwell caught nine passes for 147 yards, setting the single-season record with 1,276 yards receiving.

Mississippi State: Moorhead does have quarterback Garrett Shrader for next season after an upper-body injury kept the freshman out of this game.

Louisville: The future is very bright for Satterfield's second season with much of his starting offense back led by Cunningham, Hawkins and Atwell.