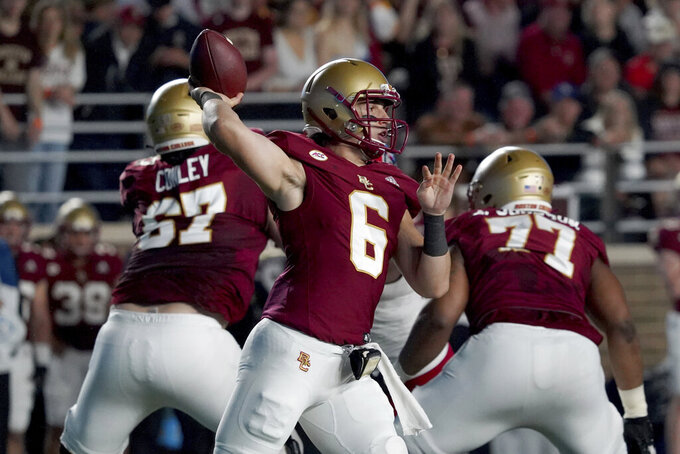 Boston College quarterback Dennis Grosel (6) looks to pass during the first half of an NCAA college football game against the North Carolina State, Saturday, Oct. 16, 2021, in Boston. (AP Photo/Mary Schwalm)

The Cardinals’ challenge against Boston College is making sure the Eagles don’t break through their defense in the clutch as others have in recent weeks.

Louisville (3-2, 1-2 Atlantic Coast Conference) has hung tough in shootouts against No. 16 Wake Forest and Virginia, scoring at least 33 points each time behind dual-threat quarterback Malik Cunningham. But the Cardinals have only a pair of losses by four total points for their effort after the defense couldn’t come up with the stop it needed.

Defensive coordinator Bryan Brown cited his unit’s lack of focus down the stretch as a factor, which he said was addressed during the off week.

“We’re not a senior-laden team, we’re a really young team and we have to understand how to finish games,” Brown said. “You’ve got to close games out. That’s one thing we need to do.

“And I have to do a better job of making sure our guys are prepared in every single situation. We’ve got to execute when it’s time to execute.”

Louisville needs to get its problems corrected to become bowl eligible. Four of its final six foes have winning records, with North Carolina State and rival Kentucky both ranked.

Considering how the Cardinals’ offense is clicking, they're looking for as many opportunities to score as possible. To get more possessions against BC, Louisville will have to shut down a rushing attack averaging nearly 171 yards per game and anchored by standout guard Zion Johnson.

While Louisville also features a strong ground game, BC coach Jeff Hafley is most wary of Cunningham’s dual skills throwing and running the football. And how quickly his team must account for either skill.

“What’s different about them is just the speed in the quarterback,” he said. “You have a play stopped and you’re covered, then all of a sudden you look up and you’re trying to figure out why the ball’s not thrown and he’s 20 yards down the field running. That’s the challenge.”

Malik Cunningham is playing perhaps the best football of his career for Louisville. The junior has thrown at least one touchdown pass in his past nine games and 22 of 23. Most importantly, he’s spreading the ball around while showing more patience in the pocket.

“The chemistry and the relationship have always been there,” said Cunningham, who has passed for 1,577 of his 1,924 offensive yards and 8 of his 18 touchdowns. “I tell those guys that their time was going to come, and now it’s time to show you guys what they can do.”

BC quarterback Dennis Grosel has faced Louisville twice, but this is the first time he is starting. In 2019, Grosel had his first extended action of his career after Anthony Brown sustained a season-ending injury at Louisville.

Louisville was a combined 7 for 25 on third down in those two losses and is converting just 36% overall to rank 12th in the ACC. By contrast, BC is second at nearly 48%.

Of the Eagles' back-to-back losses to ranked teams, their most recent was worse. They were crushed at home by N.C. State, and Hafley pointed to a third period when BC allowed three TDs to turn a three-point game into a blowout.

“What I’ve learned as a young head coach is, if you don’t learn from moments like that, I’m not doing my job," the coach said.

BC can even things at 7-all with a second consecutive win and first in Louisville since 2017.