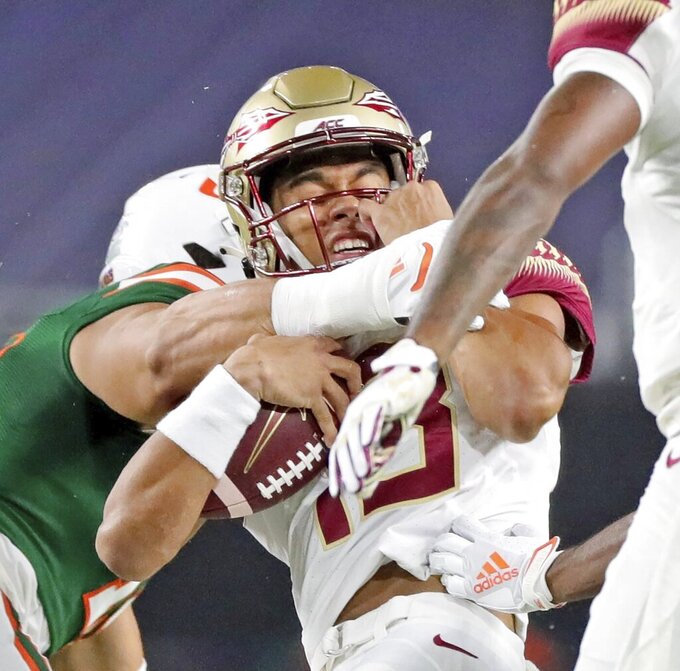 Nearly five weeks have passed since Louisville’s last home game. It's been even longer since the Cardinals' last victory.

The Cardinals have lost four consecutive games since a season-opening win over Western Kentucky on Sept. 12, their longest slide since losing 10 straight over the 2018-19 seasons. A little more than half the season remains to get back on track, and Louisville (1-4, 0-4 Atlantic Coast Conference) enters Saturday’s game against Florida State (2-3, 1-3) determined to end the skid.

“It’s never too late to turn it around,” senior receiver Dez Fitzpatrick said. “That’s one thing that we’ve learned. A lot of those guys on that (2018) team were not too positive.

“Knowing what negativity can do when it’s already spiraling down, I just preach positivity and staying in the game, keeping your nose down and working, regardless if it’s a win or a loss.”

In a way, last week’s 12-7 loss at No. 3 Notre Dame has given Louisville reason for optimism.

The Cardinals held the Fighting Irish to 338 yards and were within a touchdown in the fourth quarter. They just couldn’t get the ball back down the stretch as Notre Dame controlled the final 7:55 to seal the outcome.

Back in familiar surroundings, Louisville plans to contain FSU the same way.

“One thing we worked on really hard on this week is getting off the field on third down,” Louisville defensive coordinator Bryan Brown said. “That’s been our nemesis. The guys are responding. They can see some light at the end of the tunnel, and we’re excited to get out there and hopefully have a better performance.”

Similarly challenged to halt a three-game skid, Florida State responded with a 31-28 home upset of then-No. 5 North Carolina. The Seminoles scored all they needed in the first half before holding off the Tar Heels' rally in the final 30 minutes.

FSU has steadily improved toward that breakthrough win, and its mission is maintaining that momentum and earning its first ACC road win.

“It was important, it was big for our program, all those things,” first-year coach Mike Norvell said. But if we don’t capitalize on the learning experience that we just had, then we’re cheating ourselves.

“This week, we have to be better. We have to go out there and have that same sense of urgency in improvement because that’s what we’re trying to do.”

Some other things to watch as FSU visits Louisville:

FSU quarterback Jordan Travis briefly played on that 2-10 Louisville squad in 2018 (mostly under Bobby Petrino) before transferring to Tallahassee. The sophomore didn’t say much about his experience with the Cardinals, but Fitzpatrick remembers encouraging Travis and recognizing his potential as a QB. Travis showed multiple skills against UNC with three TDs, including two scores rushing and 298 yards of offense in just his second start.

Louisville sophomore tight end Marshon Ford continues to make the most of his opportunities. He has caught a TD in three consecutive games and four of five overall to tie for the team lead. Ford is tied for third on the Cardinals with 14 receptions for 139 yards and stands fourth in career TDs by a tight end with 11.

FSU ranks first nationally with five blocked kicks this season. Defensive tackle Marvin Wilson has three for the Seminoles, the only team to block at least one field goal, point after touchdown and punt.

Louisville didn’t allow a sack or commit a turnover at Notre Dame, ending a frustrating run of games featuring a combination of both mistakes. Most importantly for the Cardinals, they recorded four sacks and denied the Irish explosive plays.

“We’ve just got to continue doing little things correctly, finding ways to make plays offensively and defensively,” coach Scott Satterfield said. “We hope what we did last week instilled a little bit of confidence and encouragement to our guys to continue what they’re doing.”

FSU leads 16-4 and is 6-2 in Louisville. The Seminoles are also 4-2 in ACC play against the Cardinals and have won the past two.