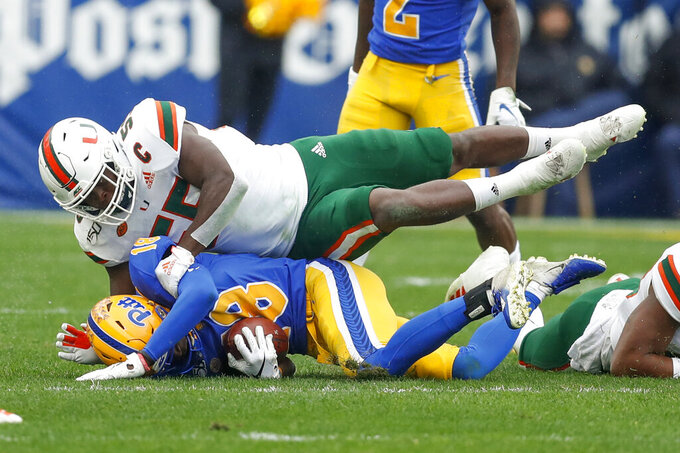 The Cardinals' coach, however, remembers them well.

Scott Satterfield was coaching at Appalachian State in 2016 when that school faced the Hurricanes, back when Pinckney and Quarterman were making just the third appearance of their careers. And now he'll see them again Saturday when Louisville (5-3, 3-2 Atlantic Coast Conference) visits Miami (5-4, 3-3) in the final home regular-season game for the Hurricanes' most experienced linebackers.

"They were really good back then, too," Satterfield said. "And they've just gotten better."

Barring an Orange Bowl appearance, this will be the final time Quarterman and Pinckney play at Hard Rock Stadium as collegians. Miami doesn't have a particularly big senior class, but losing those two linebackers — Quarterman hasn't missed a start yet in his career — will certainly leave a void.

And while there will be a bit of nostalgia during the Senior Day pregame ceremony, the Hurricanes have bigger items to deal with — such as getting the sixth win of the season and securing bowl eligibility. Miami has won two straight and is coming off a 27-10 win in the annual rivalry game with Florida State.

"We feel like we are improving," Miami coach Manny Diaz said. "The players are starting to gain some confidence, and we're going to need it because this Saturday we play a very dangerous Louisville football team who had a week off to think about nothing but the Miami Hurricanes."

The Cardinals are improving as well.

They were 2-12 in a 14-game stretch spanning the last game of 2017 and the first game of this season. They're 5-2 since, and like the Hurricanes they're also a win shy of becoming bowl-eligible in Satterfield's first season.

"We know we've got four really good teams that we've got to play in the month of November, and we're excited about that," Satterfield said. "We talk about how we're going to finish, what we're going to be remembered for this year, and it starts with Miami."

Some other things to know about the Louisville-Miami matchup:

Louisville gains 218 yards per game on the ground, led by Javian Hawkins. He has five 100-yard games so far and is 113 yards shy of being the first Louisville back to gain 1,000 in a season since Bilal Powell in 2010. Miami's run defense gives up just 98 yards per game, 12th-best in the country.

Miami defensive end Gregory Rousseau has 12 sacks on the season — seven in his last two games alone. He's recorded at least one sack in seven of Miami's nine games this season.

Miami tight end Brevin Jordan, who leads the Hurricanes with 495 receiving yards and is a key blocker, is expected to be a game-time decision with an unspecified leg injury.

Louisville has never won at Miami (0-5-1), but has won the last three games head-to-head against the Hurricanes. The Cardinals won home games in 2006 and 2014, plus a bowl game at Orlando in 2013. The teams — even though they're conference rivals — won't play again until 2025, at the earliest.

Miami, which has had a revolving door at kicker this year, has seemed to settle — for now — on Camden Price. He's 3 for 4 on field goals this season; Miami's other two kickers are a combined 6 for 13. Louisville will have a new kicker, after senior Blanton Creque's college career ended when he tore his ACL making a tackle late in the Virginia game. Creque was 8 for 11 on field goals and perfect on 33 extra-point tries this season. Ryan Chalifoux is expected to take over the job.