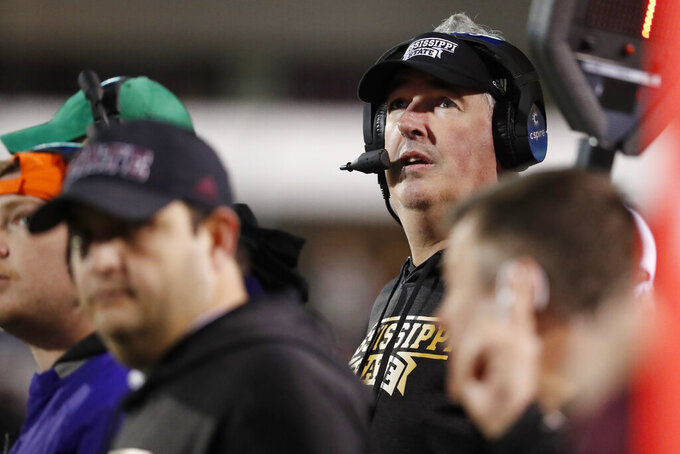 NASHVILLE, Tenn. (AP) — Both Louisville and Mississippi State have new coaches since the last time these programs met just two years ago — and of course Lamar Jackson also is long gone to the NFL.

There's still some Cardinals who want a little payback from that last meeting when they meet Monday in the Music City Bowl.

“I know for me, yes I'm doing the best I can to make sure that we win this time ...,” Louisville junior guard Robbie Bell said. “I didn't enjoy losing last time.”

Mississippi State has won all five games between the programs, though the Bulldogs had to vacate wins in 1975 and 1976. Louisville was so close to its first victory in the series in 2017, leading 24-17 in the third quarter of the TaxSlayer Bowl before losing 31-27. Defensive end Amonte Caban remembers the Cardinals' problem well.

“We just didn't finish in the end,” Caban said. “We just got to finish.”

That also applies to this group of Cardinals (7-5), who bounced back in coach Scott Satterfield's debut season after going 2-10 in 2018. They did manage to wrap up the regular season with a 45-13 loss to Kentucky.

There were reports that Mississippi State coach Joe Moorhead might not survive a loss in the Egg Bowl a month ago. Instead the Bulldogs (6-6) became bowl eligible with a 21-20 win over Mississippi that cost Matt Luke his job. Now the Bulldogs, who lost in the Outback Bowl a year ago, are trying to finish this season with a third straight victory.

With Louisville and Mississippi State among the nation's best rushing teams, Moorhead is expecting a very physical game.

“They pride themselves on running the ball as do we,” Moorhead said. “We need to stop the run and run it well. It's a little different approach than we took last year.”

An upper-body injury has derailed Mississippi State's plan to start freshman Garrett Shrader for a fifth time this season. So graduate transfer Tommy Stevens will start for the Bulldogs. Shrader led Mississippi State averaging 175.7 yards total offense per game, but Stevens is second with 155.5 yards per game. The quarterback who started at Penn State has thrown nine TDs and ran for three more.

“I'm really excited about the opportunity and hopefully get ready to get No. 7,” Stevens said.

Javian Hawkins is the big reason why the Cardinals rank 23rd nationally averaging 214.1 yards rushing per game. He set a freshman school record running for 1,420 yards as the Cardinals' first 1,000-yard back since Bilal Powell (1,405) in 2010. Hawkins has six 100-yard rushing games this season, including 233 yards in a win over Syracuse, and already is being mentioned as a Heisman Trophy candidate for 2020.

Mississippi State ranks 18th in the country averaging 226.9 yards rushing thanks to Kylin Hill, the Southeastern Conference's leading rusher with 1,347 yards and eight 100-yard rushing games. The junior is heading to the NFL draft, but he stuck around to play in this bowl. Hill is 45 yards shy of Anthony Dixon's program record for most yards rushing in a single season.

Each team will be without a starter bypassing this game to prepare for the NFL draft. Louisville left tackle Mekhi Becton had started 33 straight games with the 6-foot-8, 370-pound junior a big piece of the Cardinals' offensive line. Sophomore Adonis Boone, who has played 22 games, will replace Becton in the lineup.

Mississippi State safety Brian Cole II also is sitting out to prepare for the Senior Bowl. Fred Peters, a junior college transfer, will replace Cole on a defense that ranks 56th nationally against the run allowing only 148.6 yards per game.

Cowbells aren't allowed inside Nissan Stadium, home of the NFL's Tennessee Titans. That didn't stop Louisville from pumping cowbell noise over speakers at practices before the game to get the Cardinals prepared for what Mississippi State fans love to clang during games. Bell said he found them annoying the last time these teams played, and Robinson hopes being illegal will keep them out of this stadium.