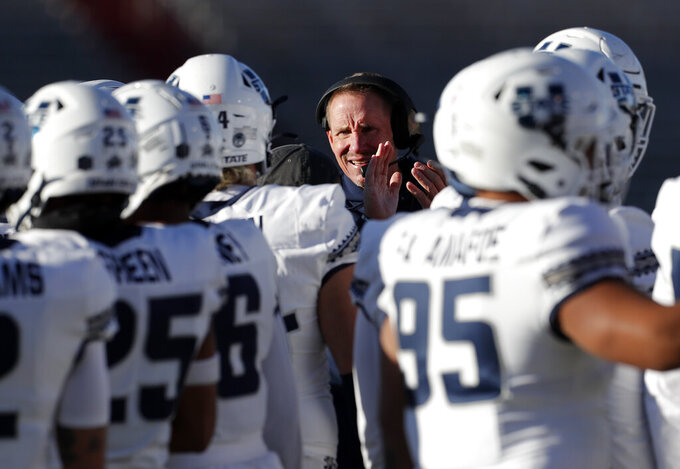 Utah State coach Gary Andersen cheers to his players during a timeout in the first half of an NCAA college football game against New Mexico on Saturday, Nov. 30, 2019 in Albuquerque, N.M. (AP Photo/Andres Leighton) 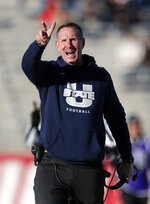 “This game was so important because there are no guarantees on a bowl game with six wins,” Aggies coach Gary Anderson said.

“I thought he played really hard and did some good things,” Davie said.

Leading 7-0 after a quarter, the Aggies (7-5, 6-2 Mountain West) rolled to four touchdowns in the second quarter to hold a 31-6 lead at the break. Utah State took advantage of two fumble recoveries and an interception in the quarter to fuel its surge.

New Mexico (2-10, 0-8) got as close as 31-18 in the third quarter before Love completed his third scoring pass, this one to Siaosi Mariner, restoring a three-score advantage.

“When a team turns around and makes a run like New Mexico did in the third quarter with back-to-back touchdowns and they got a three and out and all of sudden, it’s back to game on,” Anderson said. “And our offense goes down and drives.”

Utah State finished with four turnovers, with D.J. Williams squelching New Mexico on the Aggies’ 32 with his second interception of the game.

“We knew it was going to be a fight,” Anderson said. “We watch New Mexico play every week. They play hard and they play physical. They have a good scheme.”

“They bounced back hard from a tough loss last week and got to 6-2 in the conference and no matter what anybody says, it’s hard to get to 6-2 in the Mountain West Conference,” said Anderson.

New Mexico: The Lobos concluded their third straight losing season and sixth in eight years under Davie. The Lobos end the season with a nine-game losing streak. This is the first time the team has gone winless in Mountain West play and the first time without a conference win since 1990.

“It hit me a little bit more than I thought,” Davie said of his final game. “It seemed a little surreal.”

With Hall starting for New Mexico, he became the fourth different starting quarterback for the Lobos on the season.

Utah State: The Aggies look forward to a bowl appearance and several projections are putting the Aggies in the Famous Idaho Potato Bowl in Boise on Jan. 3.

New Mexico: With the end of the regular season, the Lobos will begin the search for a new head football coach immediately, New Mexico athletic director Eddie Nuñez said earlier in the week.

“This has been a unique, unique, unique challenge,” Davie said. “And it’s time for the next guy and I wish him well, whoever that is. And I wish these players well.”