LSU and Alabama defenses gearing up to slow down offenses 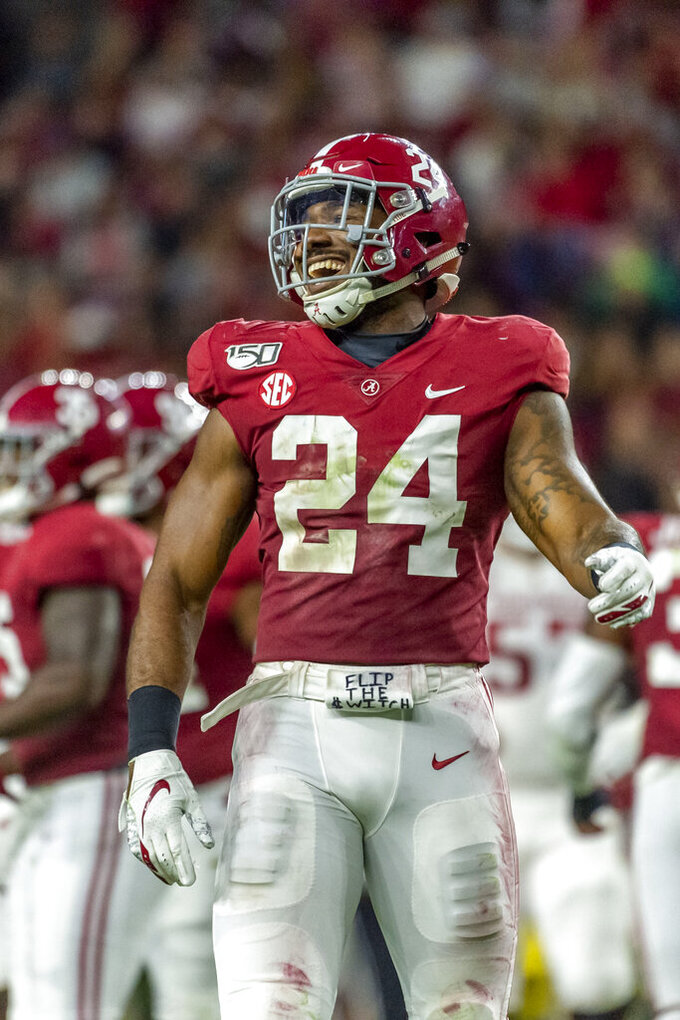 Alabama linebacker Terrell Lewis (24) grins after a stop of Arkansas during the first half of an NCAA college football game, Saturday, Oct. 26, 2019, in Tuscaloosa, Ala. (AP Photo/Vasha Hunt)

Something will have to give when the top-ranked Tigers visit No. 2 Alabama next Nov. 9 following open dates for both squads.

The teams each have battled injuries in the front seven while replacing stars now in the NFL. They also have standout freshmen, like LSU cornerback Derek Stingley Jr. and Alabama nose guard DJ Dale.

The Crimson Tide have especially relied on young talent; six freshmen have logged starts on defense for Alabama, the most of any FBS team.

If not great, it's become quite good. The Tide ranks second in the SEC in scoring defense and pass defense and third in total yards allowed per game.

Linebacker Terrell Lewis has emerged as one of the Southeastern Conference's top pass rushers. Cornerback Trevon Diggs has scored defensive touchdowns in each of the past two games. And those freshmen aren't doing so badly either.

Alabama's defense has dominated in its past two games, albeit against two of the league's worst offenses in Tennessee and Arkansas. With the status of quarterback Tua Tagovailoa (ankle) uncertain, the defenders could have to deliver big again against a much more challenging offense led by Joe Burrow.

"We have taken a huge step from the first game," Tide cornerback Patrick Surtain Jr. said. "We know we needed some things to work on from this point. We've (cut down) a large amount of defensive errors we've made and we've communicated better and we're just flying around to the ball."

LSU, meanwhile, is fourth in total defense and second against the run. The Tigers appear to have made significant strides since allowing 38 points against Vanderbilt.

After missing 18 tackles in the Vanderbilt game, Orgeron said, LSU "went back to the fundamentals of tackling, footwork and positioning.

"So I think that's a lot better," he said. "The play of the front with us rotating the front has been better. Tyler Shelvin is playing at a high level inside. That's helping us. Patrick Queen and Jacob Phillips are coming into their own, so those things have improved."

The players' production has been impressive:

— Phillips, who is leading the team in tackles, and Queen have taken on greater roles following the departure of Devin White for the NFL last spring.

— Stingley, the only freshman named a semifinalist for the Bednarik Award. The 5-star prospect has four interceptions and 13 passes defended, ranking second in the SEC in both categories in average per game.

— Dale was a much less-heralded recruit but won the starting job in the preseason, replacing Quinnen Williams.

— Middle linebacker Shane Lee has put up solid numbers in trying to fill another big void. He replaced Butkus Award finalist Dylan Moses, who went down to a knee injury in fall camp. Lee has 50 tackles and 3.5 sacks, starting alongside fellow freshman Christian Harris.

Lewis missed last season with a knee injury and Diggs only played in six games before a season-ending foot injury.

Diggs returned a fumble 100 yards to waylay Tennessee's comeback attempt and returned an interception 84 yards for another touchdown in the Arkansas game. Lewis was credited with six quarterback hurries against Arkansas.

The Volunteers and Razorbacks managed a combined 444 total yards against Alabama, which forced six turnovers. The Tide also has nine sacks in the past three games, including five against Texas A&M.

Saban likens Lewis and Diggs to 3-point shooters in basketball.