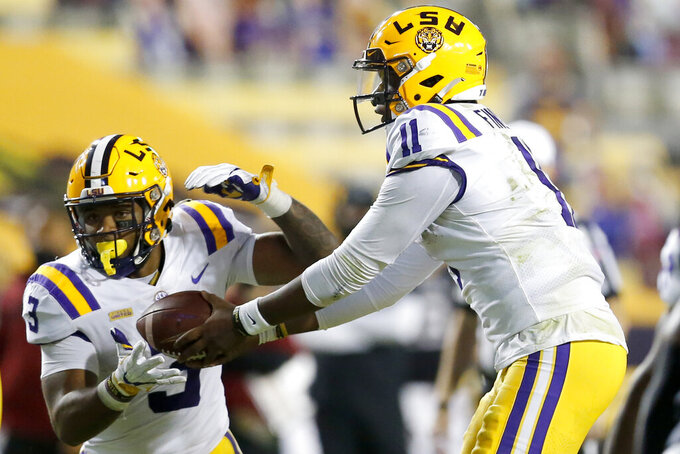 LSU quarterback TJ Finley (11) hands off the ball to running back Tyrion Davis-Price (3) during the first half of an NCAA college football game against South Carolina in Baton Rouge, La., Saturday, Oct. 24, 2020. (AP Photo/Brett Duke)

BATON ROUGE, La. (AP) — LSU freshman TJ Finley was a picture of poise and decisiveness, unfazed by the prospect of making his college debut or anything South Carolina's defense tried to do.

Finley passed for 265 yards and two touchdowns, Trey Palmer scored on a 93-yard, sideline-to-sideline kickoff return and the Tigers defeated the Gamecocks 52-24 on Saturday night.

“He was very calm before the game and during the game," running back John Emery Jr. said of Finley, a sought-after recruit from Ponchatoula, Louisiana. “For a freshman coming in and just balling like that, that was unbelievable.”

Filling in for injured starter Myles Brennan, Finley completed his first three passes and capped his first series with a 1-yard keeper for a touchdown. It was an auspicious start to a game in which Finley delighted the Death Valley crowd of 21,855 by completing 17 of 21 passes, including touchdowns of 7 and 51 yards to Terrace Marshall Jr.

“I entered this contest really relaxed,” Finley said. "Football is football. There’s only so many things a defense can do to trick you.”

Marshall continued his torrid start to this season. He finished with six receptions for 88 yards and now has 27 catches for 532 yards and nine touchdowns through four games this season.

South Carolina was unable to maintain its form from a week earlier, when the Gamecocks beat Auburn for the first time since 1933. Collin Hill was 12 of 22 for 234 yards and one touchdown, but also was intercepted by Eli Ricks, who returned the ball 45 yards for the first of LSU's two non-offensive touchdowns during the game.

Running back Kevin Harris largely carried the Gamecocks' offensive with 126 yards and two TDs on 12 carries.

“We got outcoached and outplayed," South Carolina coach Will Muschamp said. "That’s the bottom line. Tell it like it is. Give them credit."

LSU’s much maligned defense gave up several more big plays, but largely redeemed itself with several drive-stalling sacks and held South Carolina to a field goal after Finley's lone interception gave the Gamecocks the ball inside the LSU 40. South Carolina settled for field goal tries on four promising drives, and kicker Parker White missed three from 54, 34 and 40 yards.

Palmer's kickoff return for a touchdown was the first by LSU in Tiger Stadium since Eric Martin did it in 1981. The return hardly looked promising when Palmer mishandled the kickoff and had to stop and bend over to pick it up at his own 7 as South Carolina's kickoff unit converged. But Palmer was able to side-step a couple tacklers, made his way across the width of the field and outran remaining pursuers down the opposite sidelined from which he started.

LSU also looked determined to show it could run the ball after struggling do so in a 45-41 loss in Missouri on Oct. 10 in which the Tigers failed to take a final-minute lead despite having first-and-goal from the 1. LSU rushers combined for 276 yards against the Gamecocks, with Emery and Tyrion Davis-Price each scoring from inside the 5.

“We didn’t tackle," Muschamp said. "We just did not play the run very well at all, and that creates some things in the throwing game.”

“We have our swagger back. This is a big win for LSU,” Finley said. “ Our offense had big plays; explosive runs and explosive plays. The defense had explosive stops with an interception and a pick-6... I feel like we just came together today.”

LSU coach Ed Orgeron said he wanted to play fellow freshman QB Max Johnson —- son of ex-NFL QB Brad Johnson — more in the game but couldn't take Finley out because “he was on fire.”

Still, Orgeron dismissed the notion that Finley's performance could create a QB controversy at LSU.

“Myles is going to be our stating QB," Orgeron began. "But I know this: If Myles ain’t doing well, we can put in TJ and feel good about it.”

South Carolina: The Gamecocks saw their two-game winning streak halted by an LSU team with a lot to prove. South Carolina was pushed around up front, struggled to stop the run or get pressure on Finley, who was not sacked. The Gamecocks did not force one punt.

“That’s what I was concerned about coming into the game: the size of their offensive line,” Muschamp said. “Their ability to run the ball created some issues for us rushing the passer.”

LSU: Standout performances by true freshmen made the Tigers' future look bright. In addition to Finley's winning debut and Ricks' third interception of the season, defensive end BJ Ojulari had three of LSU's five sacks to give him four this season.

South Carolina has next weekend off before hosting Texas A&M on Nov. 7.

LSU plays Saturday at Auburn, which lost to South Carolina on Oct. 17.