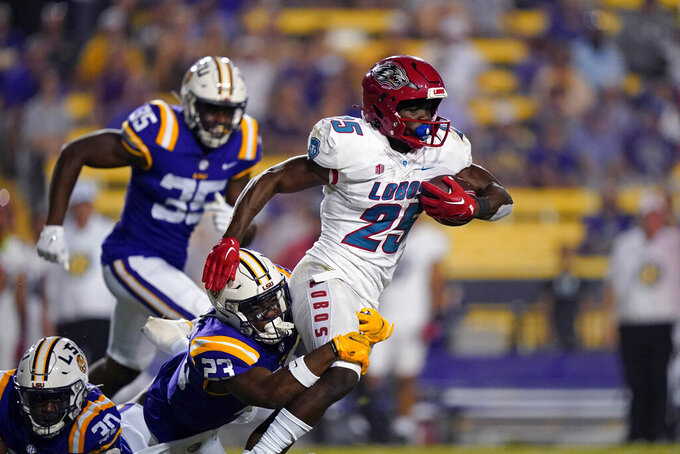 “Once is an accident, twice is a coincidence, three times is a habit,” LSU head coach Brian Kelly said. “Three wins in a row. Our guys are building good habits.”

While the defense helped propel the Tigers (3-1, 1-0 SEC) to their first shutout victory since 2018, LSU did see Daniels exit the game in the third quarter with an injury.

Scrambling for 16 yards on a fourth-down play, Daniels was slammed to the ground by AJ Haulcy and Dion Hunter. He didn’t return to the game.

Kelly said Daniels could have gone back into the game.

“Strained his lower back,” Kelly said. “He could have went back in, but there was no need at that time of the game. He was cleared by the doctors, he was good.”

Before exiting the game, Daniels had one of his most efficient efforts thus far, completing 24 of 29 passes for 279 yards.

The LSU offense got going on its opening drive, marching 57 yards in eight plays, culminating with a 5-yard touchdown run by Armoni Goodwin for a 7-0 lead. After a 31-yard field goal by Damian Ramos made it 10-0, Daniels led LSU on a methodical, 15-play, 88-yard drive with Goodwin capping things off with a 1-yard touchdown run to make it 17-0.

Averaging 27.3 points coming into the game, New Mexico (2-2) struggled to develop any sort of rhythm offensively, crossing midfield only once.

“It’s difficult to shut out anybody in football,” Kelly said. “College football is set up for success on offense. Had to juggle the lineup defensively and the guys really rallied. It was pretty clear that they were going to have a difficult time moving the football on us. Our game plan was excellent.”

Lobos senior quarterback Miles Kendrick completed only 5 of 7 passes for 47 yards. Nate Jones led the Lobos with 33 yards rushing on eight carries and Jaden Hullaby had the biggest play of the night for New Mexico when he hauled in a 38-yard pass from Kendrick that moved the ball to the LSU 38-yard line — its deepest penetration of the night.

Sophomore Garrett Nussemeier replaced Daniels in the third quarter, leading the Tigers to three touchdown drives to put the game away.

Transfer Noah Cain had touchdown runs of 49 and 1 yard. Nussemeier connected with Brian Thomas for a 57-yard touchdown to make it 38-0.

New Mexico: The Lobos fell to 1-14 all-time in games against Southeastern Conference schools. New Mexico’s lone win against an SEC team came in 2005 when they defeated Missouri 45-35 in Columbia, when the Tigers were a member of the Big 12. Missouri joined the SEC in 2011.

LSU: Playing with the same starting lineup on the offensive line for the first time this season, LSU dominated the game statistically, but saw a pair of touchdowns negated by penalties in the first half.

New Mexico: The Lobos travel to play UNLV on Sept. 30.

LSU: The Tigers hit the road to take on Auburn on Oct. 1.