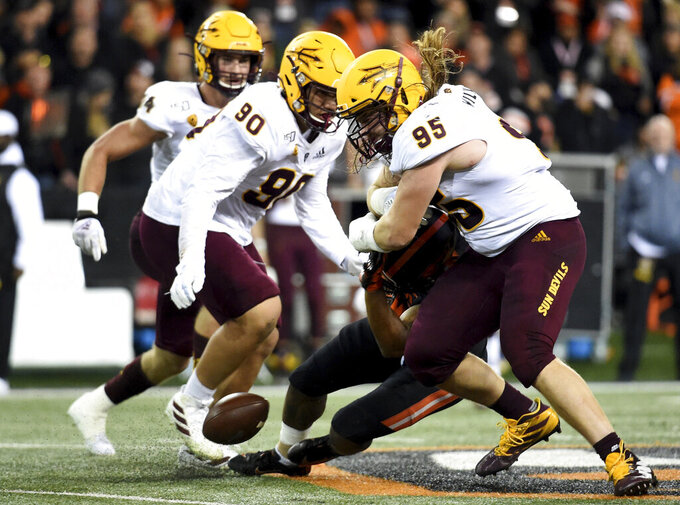 Oregon State running back Artavis Pierce fumbles the ball as he is hit by Arizona State defensive lineman Roe Wilkins during the second half of an NCAA college football game in Corvallis, Ore., Saturday, Nov. 16, 2019. (AP Photo/Steve Dykes)

CORVALLIS, Ore. (AP) — For as much growth as Oregon State has displayed in year two of the Jonathan Smith era, a signature home victory had eluded the Beavers.

That is no longer the case.

Jake Luton, one of 16 players honored during pregame festivities on senior day, passed for 288 yards and four touchdowns, leading Oregon State to a 35-34 victory over Arizona State on Saturday night.

Oregon State’s defense came up with two second-half turnovers, and a key stop on a 2-point conversion attempt to help preserve the win.

The Beavers (5-5, 4-3 Pac-12), who won just two games last season, are one victory away from becoming bowl eligible for the first time since 2013. Arizona State (5-5, 2-5) lost its fourth consecutive game after a promising start.

“Honestly, we just kept on fighting,” said OSU linebacker Hamilcar Rashed Jr., who had two sacks and four tackles for loss. “We finished it and there’s nothing else to say. We did what we had to do.”

The outcome was in doubt until the final seconds.

On fourth-and-8 from the Beavers 12-yard line with less than two minutes left, ASU quarterback Jayden Daniels delivered a strike over the middle to Brandon Aiyuk for a touchdown.

The Sun Devils elected to go for the 2-point conversion but running back Eno Benjamin had nowhere to go on a pitch left and his desperation heave into the end zone was intercepted by cornerback Nahshon Wright.

OSU recovered the ensuing onside kick and ASU never got the ball back.

On fourth-and-2 from ASU’s 44 with 42 seconds left, Luton’s pass intended for Trevon Bradford was incomplete, but cornerback Jack Jones was called for pass interference to give the Beavers a first down to seal the win.

After a slow start, Daniels completed 24 of 36 passes for 334 yards and three touchdowns. He missed the Sun Devils’ previous game against USC with a knee injury.

“I felt good. I wasn’t really thinking about my knee,” said Daniels, a true freshman. “I just wanted to win.”

The Sun Devils had 408 total yards of offense compared to 393 for the Beavers, who defeated ASU for the first time since 2014.

Luton completed 26 of 35 passes with no turnovers. He did his best work in the first half, connecting on 15 of 18 for 196 yards and three touchdowns.

Fans celebrated with players on the field after the game.

“I ran over to the family section, we were gonna like sing the fight song,” Luton said. “I turned around and saw the huge pile and ran back out there and celebrated with everyone. It was a lot of fun.”

It’s been a long time coming. The Beavers last Pac-12 home win came against Oregon in the 2016 Civil War.

“It starts with the players and then choosing to go to work and believe,” said Smith, who was the starting quarterback on OSU’s Fiesta Bowl team of 2000.

ASU was in position to score the game-tying touchdown with 10 minutes left, but Benjamin fumbled at the 1 after a hit by safety David Morris. The ball was recovered in the end zone by safety Jalen Moore for a touchback.

Tight end Noah Togiai’s 12-yard touchdown reception, which featured a highlight-reel leap over Jones at the 5, extended the Beavers’ lead to 35-21 at 4:14 of the third quarter. He had his best game of the season with a team-high eight receptions for 76 yards and one touchdown.

“I just went out and played the same as I always do,” Togiai said. “I just got a little more opportunity to make plays and Jake was feeding me the ball.”

The score was set up by defensive end Simon Sandberg’s strip sack of Daniels, whose fumble was recovered by linebacker Riley Sharp at the Sun Devils’ 28-yard line.

Back came the Sun Devils.

A 56-yard pass to Aiyuk, who got behind OSU’s secondary, led to an 8-yard touchdown pass to Kyle Williams, cutting the lead to 35-28 at 2:19 of the third quarter.

Artavis Pierce fumbled the ball away after a hit by defensive end Roe Wilkins on the ensuing possession — the Beavers’ first lost fumble of the season — and ASU took over on OSU’s 41.

But the Beavers’ defense stepped up. Linebacker Omar Speights’ 13-yard sack of Daniels on third-and-long forced a punt.

After not scoring an offensive touchdown in last week’s 19-7 loss to Washington, OSU took the opening kickoff and went 80 yards on eight plays, culminated by Luton’s 24-yard touchdown pass to Jesiah Irish.

Arizona State: The Sun Devils have to beat Oregon or Arizona to become bowl eligible for the ninth time in the last 10 years. … Benjamin, who rushed for a school-record 312 yards in last season’s 52-24 win over the Beavers in Tempe, Arizona had 70 yards on 15 carries and one touchdown Saturday. … Williams extended his streak to 38 games with at least one reception, the fourth-longest current streak in the FBS.

Oregon State: The Beavers have won four Pac-12 games for the first time since 2012. … Senior tackle Blake Brandel made his 45th consecutive start. … Rashed Jr. recorded two sacks giving him 14, a single-season school record. … Hodgins’ second quarter touchdown reception gave him 13 on the season, the second most single-season mark in school history behind Brandon Cooks (16 in 2013).