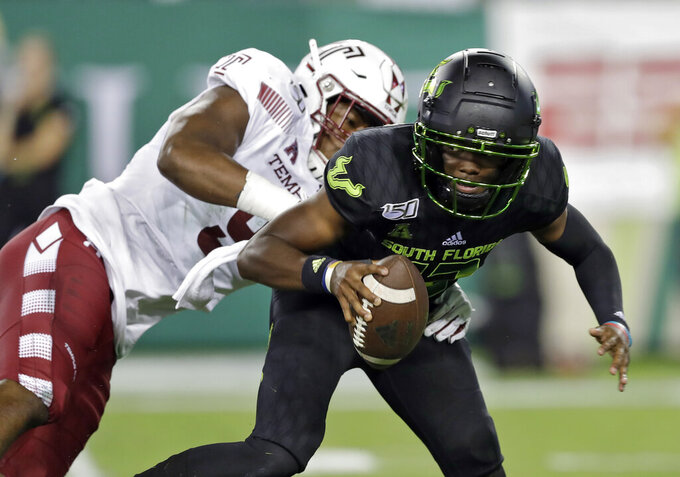 File-This Nov. 7, 2019, file photo shows South Florida quarterback Jordan McCloud (12) eluding a sack by Temple defensive end Quincy Roche during the first half of an NCAA college football game in Tampa, Fla. Roche was named American Athletic Conference Defensive Player of the Year after ringing up 13 sacks, including 10 in the Owls' final four games. In a pivotal victory over then No. 21 Maryland, the 6-foot-4, 235-pounder had a sack, a blocked kick and six tackles. (AP Photo/Chris O'Meara, File)

ANNAPOLIS, Md. (AP) — During a season in which North Carolina endured an inexplicable loss to Appalachian State and stood at 4-6 in mid-November, the Tar Heels can complete a satisfying comeback -- by the team and coach Mack Brown -- with a victory over Temple on Friday in the Military Bowl.

Brown first coached the Tar Heels from 1988-97 before taking over at Texas, where he stayed through 2013. In November 2018, after a five-year hiatus from coaching, Brown signed on again with North Carolina at age 67 to take care of some unfinished business.

“As much as anything, I love fixing things, and right now we're struggling,” Brown said at the time, referring to a program coming off successive nine-loss seasons.

The Tar Heels (6-6) are back, at least to a degree. After defeating Mercer and rival North Carolina State to close out the regular season, UNC is playing in its first bowl game since 2016 and hopeful of winning in the postseason for the first time since defeating Cincinnati in the 2013 Belk Bowl.

“I felt like in preseason that we could be a bowl team,” said Brown, who began to question that assertion after the Tar Heels fell to Wake Forest and Appalachian State on successive weekends in September.

“I didn't get a feel that our team knew how important the in-state game was with Wake. We just didn't have a buzz and we didn't play very well," Brown recalled. “And the next week, same thing.”

The Tar Heels rallied, however, and now stand on the brink of completing a winning season.

Temple (8-4) is headed to a bowl game for the fifth straight season, this time under first-year coach Rod Carey, who took the job after a six-year run at Northern Illinois. On the day it was announced that Temple would be playing in the Military Bowl, Carey was asked if he might change the fashion in which he prepared the Owls in light of his 0-6 record in bowl games.

"Whatever I've adjusted hasn't worked,"' he acknowledged. “We're going to wipe the slate clean and try something else this year. The good thing is, these guys on this team have won a bowl game so I'm going to follow their lead."

Some other things to know about the North Carolina-Temple matchup:

North Carolina quarterback Sam Howell threw for 3,347 yards, and 35 touchdown passes were the most by a true freshman in FBS history.

Howell was a high school star in North Carolina and easily made the transition to the college game.

“Sam was a great player in this state that we knew we had to have,” Brown said. “I think he grew up wanting to come here.”

Temple is allowing only 212.5 yards passing per game, in part because opposing quarterbacks have found it difficult to comfortable in the pocket.

Junior Quincy Roche was named American Athletic Conference Defensive Player of the Year after ringing up 13 sacks, including 10 in the Owls' final four games.

In a pivotal early-season victory over then No. 21 Maryland, the 6-foot-4, 235-pounder had a sack, a blocked kick and six tackles.

Brown was given a one-year extension earlier this month, stretching his contract through the 2024 season.

Now 68, Brown intends to be coaching at North Carolina well into his 70s.

“I'm going to coach here as long as I can,” he said. “As long as I'm effective for North Carolina, I will be the football coach here.”

BEEN THERE, DONE THAT

Temple and the Military Bowl have quite a history together. This marks the third time the Owls have played in this bowl, beginning in 2009 when it was called the Eagle Bank Bowl and held in Washington, D.C.

North Carolina junior linebacker Chazz Surratt was a quarterback until this season, when Brown moved him to the other side of the ball.

The switch has been enormously successful. Surratt completed the regular season with 110 tackles, six sacks, an interception and 13 1/2 tackles for a loss.

“It's just amazing to see how much he's improved and what he's done and how hard he works and how smart he is," Brown said. “I didn't know if he could do it or not, quite honestly. It's a remarkable story."