Malzahn, Auburn get boost, vote of confidence after wins 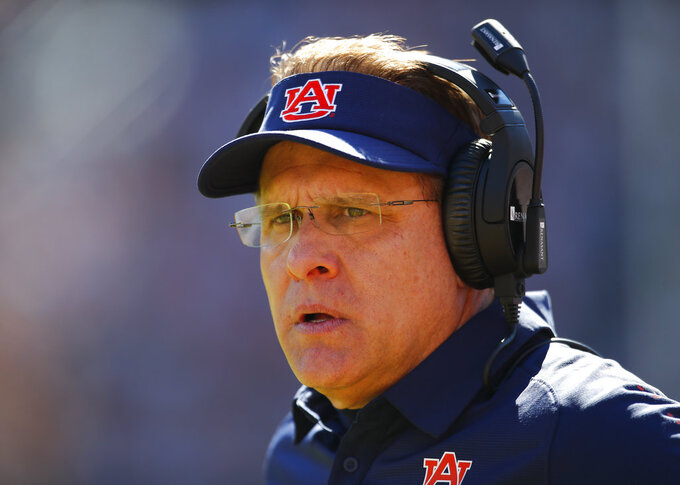 Auburn head coach Gus Malzahn watches on against Texas A&M during the second half of an NCAA college football game, Saturday, Nov. 3, 2018, in Auburn, Ala. (AP Photo/Todd Kirkland)

AUBURN, Ala. (AP) — The Auburn Tigers have rescued a season from the brink and helped make sure coach Gus Malzahn's job is safe in the process.

"He's our coach for the future," Greene said. "He'll be the coach next year. He's already proven he can get through adversity."

Malzahn and the Tigers (6-3, 3-3, Southeastern Conference) have received a jolt of confidence — and now a vote of confidence — with two straight wins, including a comeback over Texas A&M .

The Tigers are still two-touchdown underdogs but have won back-to-back games after dropping two straight. They rallied from 10 points down over the final seven minutes to beat the Aggies 28-24.

Greene told reporters after Malzahn's Tuesday news conference that the coach is coming back.

Malzahn was already feeling pretty good about the team's situation after the win over the Aggies.

"You could tell Sunday, it felt different from a confidence standpoint," Malzahn said. "That's exactly what we needed, that kind of win to help give us some momentum moving forward."

The wins have dramatically changed the mood for a team that has still fallen short of expectations. The struggles, especially on offense, had raised questions about Malzahn's status even though he has a new seven-year, $49 million deal .

The latest win supplied a big boost. Quarterback Jarrett Stidham led two drives for touchdowns in the closing minutes, capped by his 11-yard pass to Seth Williams for the go-ahead score with 1:41 left.

Stidham, who has struggled at times this season, completed 7 of 8 passes for 125 yards over the final two drives.

"It was a blast," he said. "Being down 10 with about seven minutes left, not many people were counting us in the battle still, so it was good to come back and prove everybody wrong, that's for sure."

With a closing stretch that includes road games against the Bulldogs and No. 1 Alabama, that win made Auburn bowl eligible and left the Tigers needing just one more victory to lock up a winning regular-season mark with Liberty visiting in between the two rivalry games.

The Tigers made key defensive stops, had a big punt return by Christian Tutt and delivered the two big drives. The big downside was continued struggles running the ball with Auburn producing just 19 yards on 21 carries.

"All three phases helped win that game when the pressure was on the most and that's really what our team has taken from that," Malzahn said.

This will be the the third time Auburn and Georgia have met over the past year. The Tigers pulled off an upset in the regular season then got routed 28-7 in the SEC championship game rematch.

Now, they're 14-point underdogs but at least feeling better about themselves.

"I think we're in a good spot moving forward because we got that win," Auburn defensive tackle Dontavius Russell said.