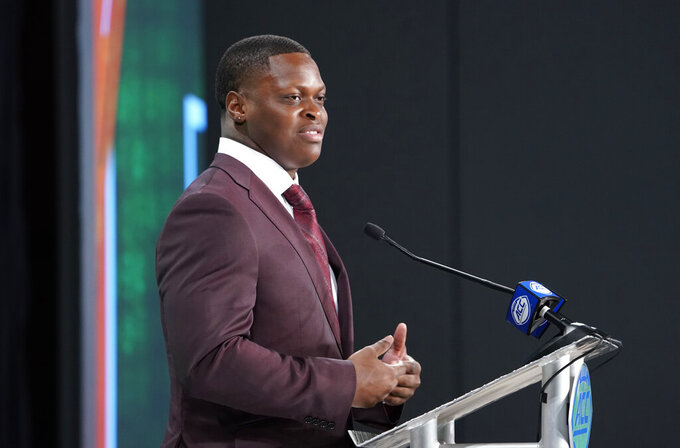 CORAL GABLES, Fla. (AP) — Perhaps luckily for Miami students, Hurricanes coach Manny Diaz is not in charge of how the university's academic side hands out grades.

Transcripts would look very different if he ran that part of the school.

With a promise that his players will spend the next four weeks competing every day for their on-field jobs, Diaz's first training camp as Miami's coach opened Friday night. The Miami native was hired Dec. 30, hours after Mark Richt retired — a move that opened the door for his defensive coordinator, who had already taken over as Temple's head coach, to spurn the Owls and return to the Hurricanes.

It was a first practice unlike any other for Miami: A 7 p.m. start on a Friday night, done so the school could invite 1,000 fans to grab free tickets and come see the normally closed proceedings. The open practice was announced Wednesday; tickets were gone within a few hours and school officials were took plenty of calls from fans who missed out on the tickets and were desperate for any other way to watch. Most had to leave after about 45 minutes, once lightning started popping up a few miles from campus.

Diaz likes to say this is 'The New Miami.'

So far, that's very much the case — with some nods to the old Miami thrown in as well, such as a renewed commitment to 1-on-1 competition from the weight room to the practice field.

"Just his energy, his vibe, his vision for the program, what he wanted to do, 'The New Miami,' bringing some of that old-school Miami back, putting us back where we need to be," wide receiver K.J. Osborn, who transferred to Miami from Buffalo, said when asked what Diaz's appeal was during the transfer process. "A great guy from Miami. Easy to speak to. Tremendous person. Tremendous coach, father. Really, really a great guy."

There are some major issues for Miami to clear before the Hurricanes head to Orlando, Florida for the Aug. 24 opener against the rival Florida Gators — a very early opener on national television, a week before most teams start playing, designed to kick off a season-long celebration of what's being recognized as the 150th year of college football.

For starters, there's no starting quarterback. N'Kosi Perry split the starting role with now-graduated Malik Rosier last year, Tate Martell transferred in from Ohio State and Jarren Williams redshirted last year while drawing rave reviews from those who saw what he was able to do in practices.

Diaz hasn't said when he'll decide on a starter. And he isn't dropping any hints on when he'll announce the winner of that competition, either.

"You'll find out when you find out," Diaz said.

There's an offensive line and a secondary to rebuild, some questions about who will be the starting running back, who will emerge as the go-to receiver. The strength of the team will likely be the linebacker corps, led by senior Shaquille Quarterman. He's played under Diaz for three years, and said that the attitude he brought to the defense as a coordinator is already getting through to the rest of the roster.

"I think that is very, very dangerous because that guy, he has put the feeling of winning into everybody he coaches, everybody he talks to, everybody he mentors," Quarterman said. "It's just a breath of fresh air. At the same time he always talks about two things: you're defined by your toughness and your word. If you play the way with the mentality that he preaches, we're going to be fine."

That was one of the things Diaz hoped people would see at the rare open practice.

There were no state secrets offered — no schemes for Florida are going in yet, no real clues on who will start and who won't were coming from the first practice. But there was a clear sense of what Diaz will want to see when it comes to being all the way right, that difference between getting an A-plus or an F on a given play.

"If you go watch all 128 teams practice over the next three weeks, everyone is running the same drills, everyone is doing the same thing," Diaz said. "It's the level of accountability and the attention to detail and learning how to do it ... that's what sets people apart."