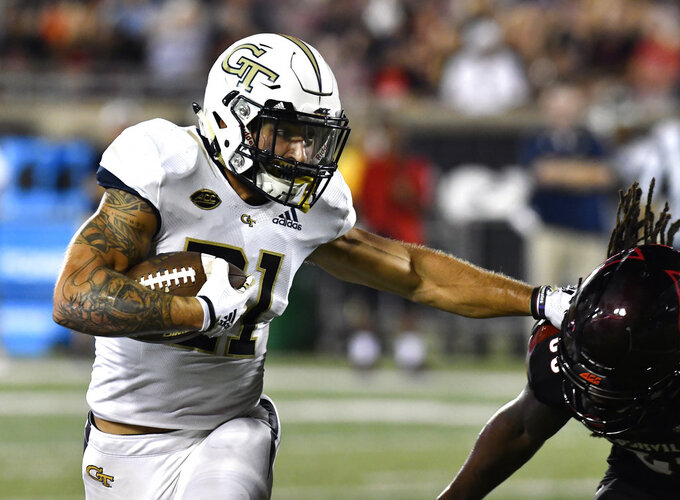 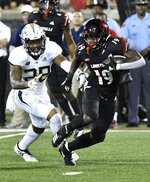 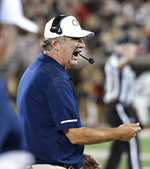 After Johnson's Yellow Jackets walked out of Louisville with a 66-31 victory Friday night, it might be time for the Cardinals to make some changes, too.

TaQuon Marshall ran for 175 yards and two scores. In all, the Yellow Jackets (3-3, 1-2 Atlantic Coast Conference) ran for a season-high 542 yards, the third-best total in school history and the second most ever yielded by the Cardinals (2-4, 0-3). Tobias Oliver, who relieved Marshall at quarterback late in the third quarter, ran for 108 yards and two scores on eight carries.

Three games into season, the Yellow Jackets were 1-2 and coming off a 24-19 loss to Pittsburgh on Sept. 15 where they only gained 320 yards on the ground and had a couple turnovers. Johnson felt the need to focus on just four or five plays for his triple-option offense.

"We had a good nucleus back from last year on offense, but I was frustrated early because we weren't playing better," he said. "We went back and simplified and went back to basics. Then the kids got better."

While Georgia Tech fell to Clemson a week later, Johnson said he saw some improvement in the second half. Things then took off last week in a 63-17 home victory over Bowling Green, as the Yellow Jackets racked up 532 yards of offense and scored on their first seven drives.

They followed it up Friday with a performance that tied for their sixth-most points in a modern-era game. In their first nine drives, the Yellow Jackets scored eight touchdowns and a field goal. Then they got a 95-yard interception return for a score from Juanyeh Thomas with 2:18 left.

The 10th drive ended the game.

"Everybody did a tremendous job playing super hard from the start to the finish," Marshall said. "I thought the guys up front blocked very well. The guys on the perimeter did a great job blocking for each other. Overall, I thought it was really different. Everybody was really locked in coming from the hotel. I could just tell how focused everybody was. It was a different energy we had coming into this one."

Louisville coach Bobby Petrino said his players knew what to expect from the Yellow Jackets attack as the coach said he started planning for the game in the spring.

"We didn't have any answers for their offense," he said. "They did a good job executing. They ran the fullback, the quarterback, the pitch guy, and we weren't able to get it stopped."

Jawon Pass completed 23 of 35 passes for 299 yards and two touchdowns to lead the Cardinals.

Georgia Tech: The Yellow Jackets' win was big for more reasons than just the score. Not only did Georgia Tech break a three-game conference losing streak, but the win also marked its first away from home in nearly two years. The Yellow Jackets beat Kentucky in the 2016 TaxSlayer Bowl in Jacksonville, Florida, on Dec. 31, 2016.

Louisville: A bad season only looks to get worse for the Cardinals. Playing against a team that had lost its last three conference games, Louisville posted its worst home loss in the 20-year history of Cardinal Stadium, topping the 68-34 loss to Kentucky in the stadium's first game on Sept. 5, 1998. The 66 points also are the most points surrendered by a Petrino-led Cardinals squad.

Georgia Tech only threw the ball twice, including on its first play of the game. Marshall's sideline pass went incomplete as Johnson said the team made the wrong formation call. Even as the Yellow Jackets began to take off after that, the coach saw his quarterback getting frustrated, even after they converted on a third down two plays later. So, Johnson felt the need to pull his senior aside.

"I said, 'Dude, we made a first down. Just relax. Just play,'" Johnson said. "And so, when he gets in that groove, he's a really good player."

Even after losing former Heisman Trophy candidate Lamar Jackson to the NFL after last season, Petrino was bullish about this team. After Friday, he admitted he may have set expectations a little too lofty.

"I'm always going to come out with high expectations and set the standards high," he said. "We've got to come back and get back to being a good football team. We're actually not excelling right now and that's coaching."

Louisville: Travels to Boston College next Saturday for an ACC Atlantic Division contest.