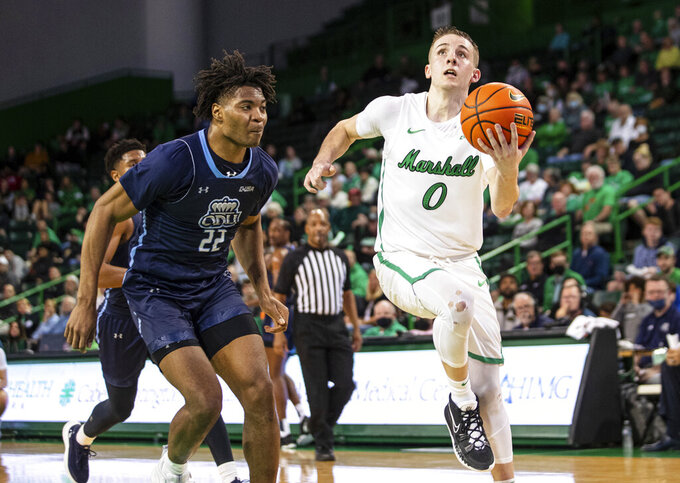 Marshall's Andrew Taylor (0) drives to the rim against Old Dominion's Kalu Ezikpe (22) during an NCAA men's basketball game on Thursday, Feb. 17, 2022, at the Cam Henderson Center in Huntington./The Herald-Dispatch via AP)

CHARLESTON, W.Va. (AP) — Marshall was granted a temporary restraining order Thursday against Conference USA after the league filed a request for arbitration in the school's bid to expedite an early move to the Sun Belt.

The order by Cabell County Circuit Judge Christopher Chiles prohibits Conference USA from proceeding with arbitration. Chiles said the order is good for 10 days but could be extended. He set another hearing for March 16.

Marshall, Old Dominion and Southern Mississippi accepted invitations to the Sun Belt during the fall. Each announced earlier this month they planned to terminate memberships in C-USA on June 30 to join their new conference. C-USA has said the three schools are contractually obligated to stay put for another year.

Marshall sued Conference USA earlier this week, claiming among other things that as an arm of the state, it was entitled to sovereign immunity under the state and federal Constitutions.

“Marshall faces immediate and irreparable injury and is likely to succeed on the merits,” Chiles wrote in his ruling.

The judge said granting the motion for the temporary restraining order "is in the public interest."

Conference USA said in a statement while it respects the court's decision, the league's board of directors "stand firm in their belief that all Conference USA institutions, including Marshall, are expected to honor their contractual obligations and adhere to the agreed upon bylaws and covenants. Conference USA is fully prepared to move forward with the remainder of the legal process.”

The league last week released a football schedule for the 2022 season that included 14 teams, including Marshall, Southern Mississippi and Old Dominion. Six other C-USA schools have announced they are leaving for the American Athletic Conference, but not until 2023.

C-USA has plans to add Liberty, New Mexico State, Jacksonville State and Sam Houston State to rebuild the conference, but those schools are not scheduled to join until 2023.