Marshall to mark 50th anniversary of plane crash vs. MTSU 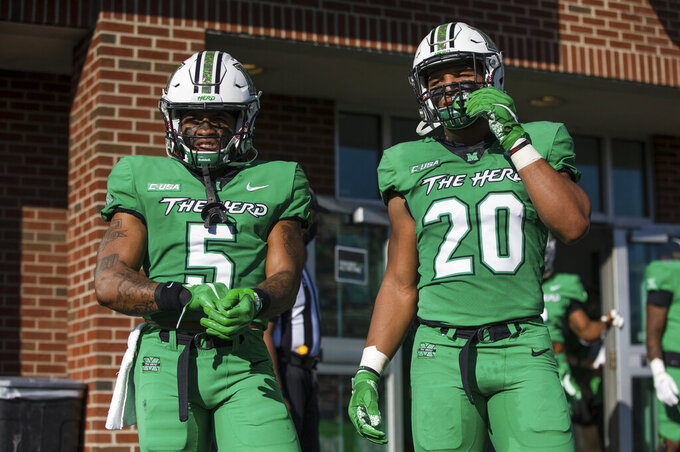 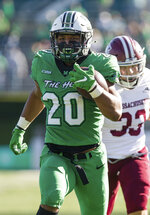 Marshall will try to remain unbeaten as it commemorates the 50th anniversary of a plane crash that killed 75 people, including most of the Thundering Herd football team. It remains the worst sports disaster in U.S. history. Middle Tennessee has not played in three weeks and will attempt to regain momentum after winning two of its last three games.

Middle Tennessee QB Asher O'Hara against Marshall's defense. The redshirt junior threw for 333 yards and two touchdowns with no turnovers in the Blue Raiders’ last game. A year ago he threw for 261 yards, ran for 76 and the Blue Raiders beat Marshall 24-13. This season the Thundering Herd is allowing 67 rushing yards per game, second best in the nation.

Middle Tennessee: WRs Jarrin Pierce and Yusuf Ali. Pierce is tied for the Conference USA lead with 46 pass receptions. Ali is fifth in receiving yards with 68 per game.

Marshall: RB Brenden Knox. The junior is averaging 112 rushing yards and has nine scores on the ground. Middle Tennessee allows 246 yards per game and has surrendered 19 rushing TDs.

Middle Tennessee has never beaten a ranked team. ... The Blue Raiders last played Oct. 24 with a 40-34 double-overtime win at Rice. Their game with Charlotte last week was postponed and has not been rescheduled yet. ... Marshall is awarding degrees this week in their fields of study to the 36 football players who died in the Nov. 14, 1970 plane crash. On Saturday before the game, Marshall will hold a solemn, invitation-only ceremony remembering the crash victims at its Memorial Fountain, which is turned off each fall and turned on each spring. ... Middle Tennessee safety Greg Grate is tied for second nationally with three interceptions. ... Middle Tennessee, which lost to Troy at home on Sept. 19, plays the Trojans on the road next week.