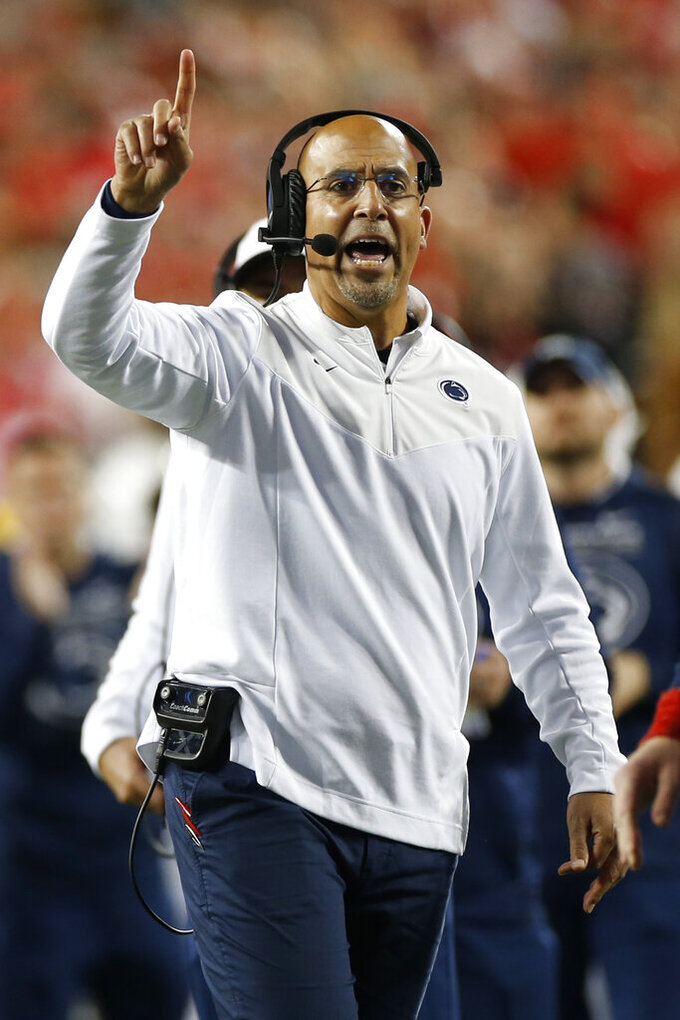 Penn State coach James Franklin signals to his team during the second half of an NCAA college football game against Ohio State on Saturday, Oct. 30, 2021, in Columbus, Ohio. (AP Photo/Jay LaPrete)

COLLEGE PARK, Md. (AP) — The stakes for Maryland and coach Michael Locksley are a little higher when Penn State comes to town.

Geographically, the Terrapins still exist on the periphery of the Big Ten. But compared to other conference schools, the Nittany Lions are pretty close to College Park — near enough to be a threat both on game day and during the recruiting season.

“A great opportunity to play a regional rivalry, a team that's right up the road from us that focuses a quite bit of their efforts in recruiting here in our home state,” Locksley said. “We're hopeful that we get our fans in the seats and not their fans.”

It's a reasonable road trip for Penn State fans, and although this has generally been a one-sided rivalry — Maryland has just three victories in 44 meetings with the Nittany Lions — the Terps did win last season's encounter. Saturday's game against No. 22 Penn State is another chance for Maryland to try to measure up against a ranked team, and an opportunity for the Nittany Lions to rebound from a hard-fought loss to Ohio State.

Locksley and Penn State coach James Franklin were on the same staff at Maryland two decades ago. Locksley coached running backs and Franklin was a receivers coach.

“I had a great experience there,” Franklin said. “It was really my first big-time, full-time job.”

Maryland (5-3, 2-3) won its first four games this season before stepping up in class to face Iowa and Ohio State. The Terps were drubbed in those two games by a combined score of 117-31. Now comes another tough stretch on their schedule. After facing Penn State, they meet Michigan State and Michigan.

The Nittany Lions (5-3, 2-3) lost 33-24 at Ohio State last weekend. Then they started prepping for the Terps later than they wanted to.

Their flight home had to be diverted to Harrisburg, Pennsylvania after fog at the regional State College airport prevented them from landing. Players and team staff had to find busses to ferry them nearly 90 miles home from the state capital.

If Penn State needs to turn to a quarterback other than Clifford, freshman Christian Veilleux may get the nod.

Franklin confirmed Tuesday that Ta’Quan Roberson is dealing with an unspecified injury and has been limited in practice. Veilleux worked with the second team before Penn State’s game against Ohio State.

Maryland hasn't been in the postseason since playing in the 2016 Quick Lane Bowl. Another win would give the Terps a nice milestone in Locksley's third season at the helm.

“Obviously, six is the magic number to become bowl eligible. We all know it," he said. "Because we now have five, we can talk about six.”

Although Penn State’s offense is ranked 86th nationally, the team’s punter has been on point nearly every time he’s been called on.

Thanks to Jordan Stout’s program-best 48.5-yard punting average, the Nittany Lions’ defense has had long fields to defend.

Tagovailoa helped snap Maryland's three-game losing streak in a win over Indiana last weekend. He threw for 419 yards, the most for a Terp since 1993.

Tagovailoa played at Alabama in 2019 before transferring, so he has experience at a school where bowl eligibility is taken as a given.

“Postseason is always good, but looking at our schedule, it's not going to be easy," he said.