Maryland, Locksley seek stability at QB for 2020 and beyond 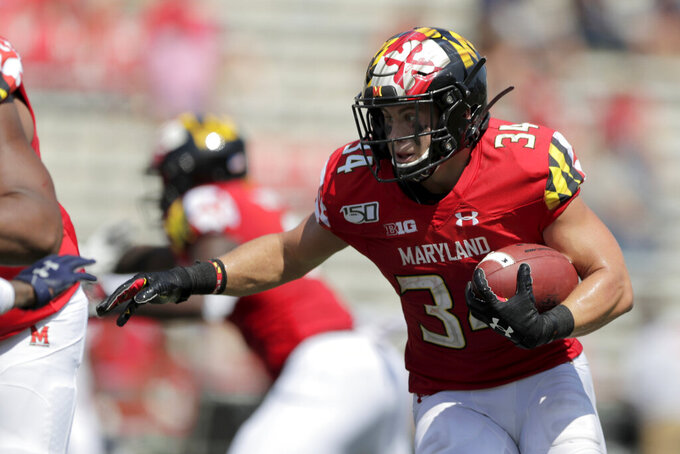 FILE - In this Aug. 31, 2019, file photo, Maryland running back Jake Funk runs with the ball against Howard during the second half of an NCAA college football game in College Park, Md. Funk and Tayon Fleet-Davis will likely receive the brunt of the carries, at least at the season's outset. Fleet-Davis, a senior, has 589 yards in offense and 10 touchdowns. Funk has 31 games of experience despite missing the final nine games in 2019 with a knee injury. Moreover, as Locksley enters his second season as the helm, he deals with quarterback Josh Jackson opting out of the 2020 season because of the COVID-19 pandemic and Tyrrell Pigrome has transferred to Western Kentucky. Alabama transfer Taulia Tagovailoa and redshirt freshman Lance Legendre have been competing for the starting spot this fall. (AP Photo/Julio Cortez, File)

Since its last winning season in 2014, Maryland has gone through four different head coaches and a variety of quarterbacks -- none of whom could remain healthy or effective enough to hold onto the job.

The carousel keeps spinning as Michael Locksley enters his second season at the helm. After Josh Jackson opted out of the 2020 season because of the COVID-19 pandemic and Tyrrell Pigrome transferred to Western Kentucky, Locksley will start anew in his quest to find a quarterback not just for this season but for the next several years.

Alabama sophomore transfer Taulia Tagovailoa and redshirt freshman Lance Legendre have been competing for the starting spot this fall. Locksley isn’t ready to name his starter for the Big Ten opener on Oct. 24 at Northwestern, but the coach can only hope the player who ends up atop the depth chart will stay there.

“We haven’t had a franchise guy here in a lot of years,” said Locksley. “It’s not because we didn’t have the talent, but all the injuries. There’s been no stability or continuity at that position.”

Locksley went 1-5 as an interim coach in 2015 after replacing Randy Edsall in the middle of a 3-9 season. Locksley returned last year and endured a frustrating season in which Jackson and Pigrome endured injuries and played erratically.

That was merely one frustrating aspect of a year in which Maryland opened with blowout wins over Howard and Syracuse to earn a No. 21 ranking the AP poll, then lost nine of its last 10 games.

The Terrapins are still among the youngest teams in the Big Ten, and playing a nine-game schedule consisting solely of conference opponents will be extremely difficult to negotiate. But Locksley expects to benefit from the painful lessons he received in 2019.

“Obviously, Year 2 with some of the same players gives you a better understanding of what makes some of these guys tick,” he said. “Also, I would hope that I’m a better coach this year. But time will tell.”

The Terrapins threw 12 interceptions, lost nine fumbles and were penalized 70 times for 585 yards last season, which goes a long way toward explaining their 3-9 finish, including 1-8 in the conference.

“The big thing is, on offense we’ve got to be one of those teams that doesn’t beat itself,” Locksley said. “We had a lot of penalties, sacks, interceptions, fumbles. We’re playing only a Big Ten schedule, and those teams don’t need help beating us.”

The Terrapins lost their two most effective running backs in 2019. Anthony McFarland Jr. was selected by Pittsburgh in the fourth round of the NFL draft and Javon Leake got a look from the New York Giants.

Seniors Tayon Fleet-Davis and Jake Funk will likely receive the brunt of the carries. Fleet-Davis has 589 yards in offense and 10 touchdowns. Funk has 31 games of experience despite missing the final nine games in 2019 with a knee injury.

Locksley said the receiving corps is “one of the strengths of our team,” but Tagovailoa and Legendre have thrown a combined 15 passes at the college level.

“I'm confident in the talent level both of those guys have shown," Locksley said Wednesday. “Now it's just a matter of getting them game experience."

Locksley is looking for a better performance from a defense that last year allowed an average of 450 yards per game.

“I feel good about the direction we’re moving,” he said. “The big thing defensively that I’ve seen is our overall team speed, their ability to get to the ball.”

Missing spring ball was a huge hurt for the rebuilding Terps, but Locksley insists the players benefited greatly from Zoom sessions and have done the necessary drills in practice to be prepared for the season.

“Nothing has changed,” he said. “We’re going to tackle, we’re going to block, we’re going to play physical. I feel comfortable doing things we normally do because of the protocols our medical people and the Big Ten have put in place.”

The delay to the start of the season cost Maryland non-league games against Towson, Northern Illinois and West Virginia. They’re 14-38 in Big Ten play since joining the league in 2014, so this year won’t be easy -- most notably a three-game stretch in November against Penn State, Ohio State and Michigan State.

Maryland opens at Northwestern and begins its home schedule - without any fans - on Friday night, Oct. 30, against Minnesota.