Maryland looks to focus on ending 2-game skid vs Rutgers 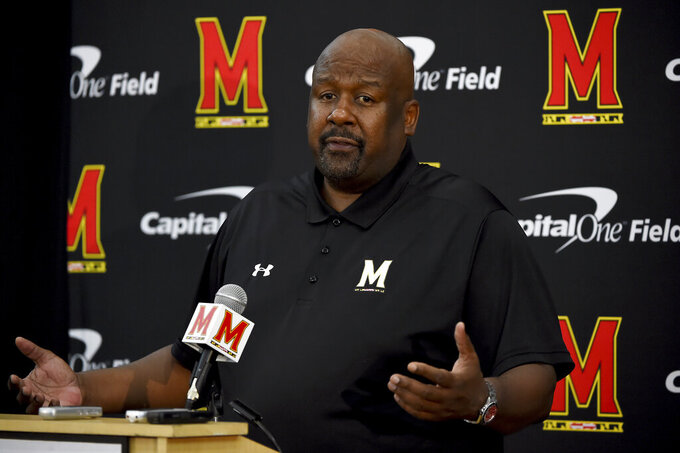 He doesn't want his team to dwell on its riveting to start to the season. He certainly has no interest in the Terrapins wallowing in back-to-back losses, including a record-setting defeat against Penn State.

"Plays within a game have a shelf life, which means when the play is over, you have to get to get to the next play," the first-year coach said Tuesday. "Well, so do games. Whether it's games where we have great success or games like the most recent one against Penn State where we weren't very good, we need to move on."

After a burst featuring 142 points in the first two games and the program's first national ranking since 2013, the Terrapins (2-2, 0-1 Big Ten) have sputtered in their last two outings. On Sept. 14, there was a series of red zone problems in a 20-17 loss at Temple .

Then, in front of the sixth-largest crowd in school history, Maryland absorbed a 59-0 drubbing against Penn State. It was the Terps' most lopsided home shutout loss ever, breaking a 111-year-old record.

"We think as a team, we think a lot about each other and what we can do," safety Antoine Brooks Jr. said. "We think we can do better, and we are going to do better."

Maryland's setbacks aren't confined to game results, either. The Terps entered the season with enviable running back depth, but injuries have already eroded it. Junior Jake Funk suffered a torn ACL against Temple, and Lorenzo Harrison III will undergo surgery after tearing an MCL and partially tearing an ACL against Penn State.

But Maryland also needs better play from quarterback Josh Jackson if it is to stabilize its season against the Scarlet Knights (1-3, 0-2). Jackson threw for 541 yards, seven touchdowns and one interception in the Terps' two victories, but has just 248 yards, a touchdown and three interceptions in his last two outings.

The Terps have also allowed eight sacks in their two losses, compared to just one over the season's first two weeks.

"He hasn't had trouble in protections in first and second downs," Locksley said. "It's been third down that's been our Achilles' heel the last two games. We've been in some terrible third-down situations which aren't favorable for anybody."

Locksley has preached concentrating on matters inside the program rather than fretting about opponents since arriving in December, an attitude especially pertinent this week since Rutgers just fired coach Chris Ash on Sunday. The Scarlet Knights elevated Nunzio Campanile to interim coach.

Given the uncertainty of how Rutgers will respond to its coaching shuffle, there's an even greater onus on the Terps to simply handle their own fundamentals better while they look to revive their season.

"Alignment, assignment, effort, execution and finish — when we do those five things, we're the team that beat Howard and beat Syracuse," tight end Tyler Mabry said. "When we don't do the things we're supposed to do, (we're what) you saw against Temple and you saw against Penn State."